President Donald Trump's decision to freeze millions in security assistance to Ukraine has been dominating headlines lately given its central... 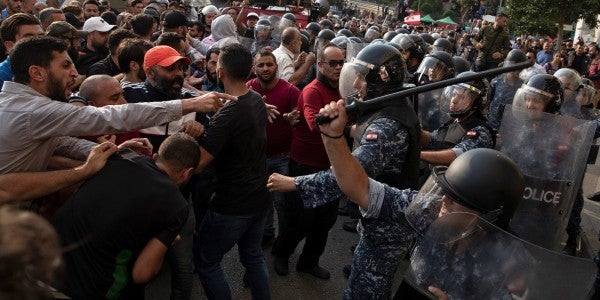 President Donald Trump's decision to freeze millions in security assistance to Ukraine has been dominating headlines lately given its central role in the impeachment inquiry.

But less attention has been granted to the Trump administration's ongoing hold on $105 million in congressionally-approved military aid to Lebanon as it faces an escalating economic and political crisis — with mass protests occurring nationwide.

The White House has not explained why the Foreign Military Funding for the Lebanese Armed Forces (LAF) has been held up for months, despite strong support for it within the Pentagon, State Department, and National Security Council — a situation that has parallels to Trump's freeze on military aid to Ukraine.

Meanwhile, congressional lawmakers and experts on the region are warning the aid freeze plays right into Iran and Russia's hands.

'It's incredibly dangerous for Lebanon'

The LAF is seen is one of the only buffers against the influence of Hezbollah, an anti-Israel, Iran-backed Shiite Muslim militant group and political party that the U.S. views as a terrorist organization. Cutting funding to the LAF at such a sensitive time for Lebanon could see the unrest spiral in a direction that leaves the country open to exploitation by US adversaries.

Ned Price, a former national security official in the Obama administration, told Insider the LAF “are among the most inclusive and stabilizing elements of Lebanese society” and that “weakening it invites Hezbollah, Iran, and Russia deeper into Lebanese society.”

Price added that it is “not normal” and “not legal” for Trump to “withhold congressionally obligated funds.”

“It's incredibly dangerous for Lebanon and for our own institutions at home to see this practice continue,” Price went on to say, also stating that it's possible Trump is seeking to “normalize” freezing military aid as he offers a series of inconsistent justifications for withholding assistance from Ukraine.

David Rothkopf, a foreign policy expert and CEO of The Rothkopf Group, told Insider that the LAF is the “primary counterweight to Hezbollah's influence” and freezing aid to it empowers Hezbollah's Iranian sponsors.

Unlike the aid to Ukraine, which was ultimately released in September, there's no evidence Trump is withholding assistance to Lebanon in exchange for political favors.

But the Trump administration has offered nebulous responses when questioned about it. Secretary of State Mike Pompeo on Tuesday, for example, said he didn't have “anything to say on the Lebanon funding issue today.”

David Hale, one of the top officials in the State Department who served as U.S. ambassador to Lebanon from 2013 until 2015, in testimony to House impeachment investigators earlier this month signaled that the freeze on the aid goes back to late June. Hale said this was around the time he “first started to hear that there was a problem” with the security assistance to Ukraine.

“I learned from a member of my staff, I believe, and the aid package to Lebanon was also being held in the same fashion,” Hale said. “So, you know, people started asking: What's the problem?”

Hale, the third highest ranking official in the State Department, told House investigators he has “not received an explanation for hold on the Lebanese assistance program.”

The White House Office of Management and Budget did not immediately respond to a request for comment from Insider.

Former US ambassador to Lebanon: 'The military assistance now under review should be rapidly released'

A protester holds a Lebanese flag at a roadblock during ongoing anti-government demonstrations in Beirut. (Reuters photo)

Since October, Lebanon has been consumed by massive protests that initially began after the government announced a new tax on internet calls, including via Facebook and WhatsApp (the primary form of communication in Lebanon). The Lebanese government swiftly abandoned the new tax and Prime Minister Saad Hariri stepped down not long after, but this did not quell the multi-sectarian demonstrations and their deeper, complex origins.

The protests are largely a rebuke of rampant corruption, government mismanagement, and a system dominated by sectarianism. Lebanon has an $86 billion national debt — a 152% debt to GDP ratio — making it the third most indebted nation in the world .

Jeffrey Feltman, a veteran diplomat who served as the US ambassador to Lebanon from 2004 to 2008, in recent testimony to the House Foreign Affairs Committee emphasized the importance of continuing the aid to the LAF in relation to Hezbollah's shaky position as a consequence of the demonstrations.

Hezbollah has sought to discredit the demonstrations, which have seen Sunnis, Christians, Shia, and Druse unite in common cause. In some cases, Hezbollah has been involved in violence against the protesters.

In contrast, Feltman said that the LAF's response to the demonstrations “has not been perfect,” but he added that “overall, the LAF has responded with professionalism and restraint to what from both security and political angles must be a most trying situation.”

Feltman described the hold on military aid as damaging to US credibility.

“The military assistance now under review should be rapidly released,” Feltman said. “At a time when the LAF's popularity is trending mostly upwards compared to what appears to be Hezbollah's reputational decline, we can reinforce what is, for us and for Lebanon, a positive momentum.”

Feltman underscored that releasing the assistance “would also undermine the ongoing attempts by Hezbollah, Iran, Syria and Russia to entice the Lebanese into their orbits by calling into question U.S. reliability.”

Democratic Sen. Chris Murphy of Connecticut on Tuesday echoed Feltman's concerns in a series of tweets while returning from a trip to Lebanon.

Murphy, who sits on the Senate Foreign Relations Committee, said people in Lebanon are are “shaking their heads as Trump still refuses to send congressionally mandated security aid.”

He added: “Cutting off LAF funding is the dumbest thing we could do if we are trying to weaken Hezbollah.”

Murphy said Lebanon is at an “exciting moment” as a broad group of young demonstrators push back against the corruption and elitism that has stifled the country's progress. But as Hezbollah fights back, Murphy described the LAF as “the only force that can protect the protesters.”

The Connecticut senator said that if the LAF is not able to sustain operations it could lead Hezbollah to “take over” or Russia to become the new “backer” of the Lebanese armed forces. “Both are awful,” Murphy added.

Murphy compared the situation to Trump abandoning the Kurds in Syria and withholding aid to Ukraine, actions that were broadly perceived as beneficial to Russia.

Similarly, Rothkopf described the aid freeze as “just the latest Trump move to reward Russia directly for its support of him during the 2016 elections and perhaps to seek more of that support in 2020.”

“Withholding aid in Ukraine, pulling out of Syria, attacking NATO allies and weakening the alliance, pulling out of the INF Treaty, defending and enabling Russian attacks on US and western democracies, pushing for Russian re-entry into the G7, kowtowing to Putin — all of these steps are materially beneficial to Russia, damaging to the U.S. and would never have been taken by any other U.S. president in modern history,” Rothkopf said.

~d:fs
analysis
donald trump
Hezbollah
How The Other Half Fights