Trump Won’t Stop Saying ‘My Generals,’ And Many Veterans Are Not Happy About It

President Donald Trump has made a habit of using a particular phrase that has angered members of the U.S. military community. The... 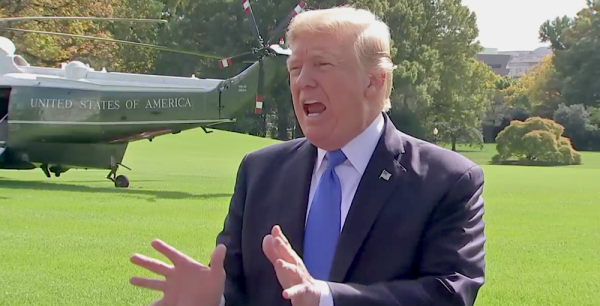 President Donald Trump has made a habit of using a particular phrase that has angered members of the U.S. military community.

The latest instance came on Oct. 25, when the president was asked whether he authorized the mission that resulted in the deaths of four U.S. military members in Niger earlier this month.

“My generals and my military, they have decision-making ability,” Trump told reporters.

Pres. Trump: “My generals and my military” have decision-making abilities in places like Niger. https://t.co/emmnJ7kLXz

What has set military members off is Trump's insistence on saying “my generals” and “my military,” which some say suggests a misguided sense of ownership over the country's armed forces.

“The U.S. military belongs to the nation, not the president,” Hertling said. “We're not his.”

Leon Panetta, the former defense secretary and director of the CIA, has also objected to the president's choice of words.

“He has responsibility obviously, as commander in chief, to be able to make decisions with regards to our military. But I think if you ask the men and women in uniform who they are responsible to, I think their answer would be, 'We're responsible to the United States of America.'”

Wednesday's comments are far from the first time Trump has referred to the U.S. military in possessive terms. He did it just a week ago as he incorrectly asserted that former President Barack Obama didn't call the families of fallen soldiers:

“President Obama, I think, probably did sometimes, and maybe sometimes he didn't, that's what I was told. All I can do is ask my generals,” Trump said.

The president used the phrase again in June in a tweet announcing his decision to ban transgender members of the military, “after consultation with my generals and military experts.”

In April, when a reporter asked Trump if he had personally authorized a bomb strike on an ISIS tunnel complex, the president responded, “Everybody knows exactly what happened. What I do is I authorize my military.”

One of the first instances came on Inauguration Day in January — at a luncheon just hours after being inaugurated — when Trump recognized Gens. James Mattis and John Kelly.

“I see my generals, generals that are going to keep us so safe,” Trump said to members of Congress and other dignitaries, before saying to Mattis, “These are central casting. If I'm doing a movie, I pick you General.”