Can Trump Declare A ‘National Emergency’ To Build The Border Wall? What You Should Know

As the partial government shutdown enters its third week, President Donald Trump is hinting at a different approach to building his border wall: declaring a national emergency 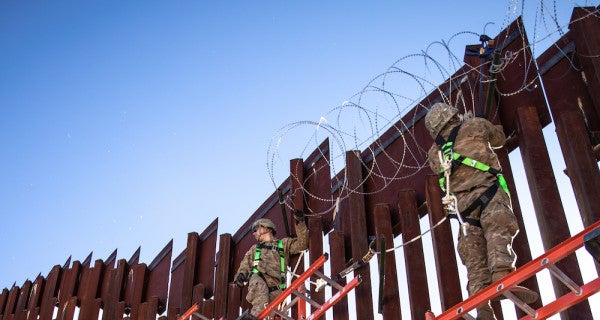 He's vowed to keep the government closed as long as it takes to secure funding for a wall along the U.S.-Mexico border.

Now, as the partial government shutdown enters its third week, President Donald Trump is hinting at a different approach: declaring a national emergency.

In recent days, Trump has said he may call a national emergency in an effort to get funds for a border wall without consent from Congress.

He did not offer any details.

But would declaring a national emergency get Trump funding for the border wall he has promised his supporters since early in his campaign?

Here are some answers:

That can be widely debated.

Presidents have called national emergencies in response to an array of events — terrorist attacks, cyber attacks, hostage situations. But the National Emergencies Act of 1976 does not specify what constitutes an “emergency.”

For months, critics have assailed the Trump administration, saying it is trying to create the appearance of a security crisis at the U.S.-Mexico border.

In arguing that a wall is needed, administration officials have, among other things, said that nearly 4,000 known or suspected terrorists were prevented from entering the U.S. in 2017. That number, however, counts stops made by Department of Homeland Security across the world, mainly at airports and not the southern border.

Can Trump declare a national emergency?

Legal experts say the act gives the president the power to declare a national emergency. But the act does not require presidents to prove a crisis exists to declare an emergency — it's at their sole discretion.

Congress can terminate a declared emergency, but it requires a two-thirds majority in both chambers, according to Loyola law professor Jessica A. Levinson.

Could Trump use government funds to build a wall during a national emergency?

It's possible, but would likely be challenged in court, say legal experts.

Should he declare a national emergency, Trump would not have free-floating powers, said Kim Lane Scheppele, a legal scholar and professor at Princeton University's Center for Human Values. A president “can only make use of specific powers that Congress has put into law to be used precisely when the president declares an emergency,” she said.

“Once he declares an emergency, he must specify which emergency powers he is using — and he's limited to those already in the law,” Scheppele said.

One provision says that after an emergency declaration, the “Secretary of Defense, without regard to any other provision of law, may undertake military construction projects, and may authorize secretaries of the military departments to undertake military construction projects, not otherwise authorized by law that are necessary to support such use of the armed forces.”

“Trump might test it and wait for his decision to be challenged by Congress or in the courts,” she said.

What have members of Congress said about Trump's threats to declare a national emergency?

Democrats, who control the House, remain steadfast in their opposition to Trump's demand for $5.7 billion to build a wall, and they have expressed outrage at the notion that he would declare a state of emergency to circumvent Congress, which has authority over budgetary matters.

Sen. Jack Reed (D-R.I.), ranking member of the Armed Services Committee, said the idea “that President Trump is considering declaring a phony national emergency as a pretext to take billions of dollars away from our troops and defense priorities in order to pay for his wall should alarm all Americans.”

“Declaring a trumped-up national emergency in order to skirt Congressional approval is wrong,” Reed said in a statement. “And our troops and taxpayers should not bear the burden of a broken, preposterous campaign promise.”

“I can just tell you, I don't know what he's basing this on, but he's faced so many lawsuits when he ignores the law and ignores tradition and precedent and just goes forward without any concern,” Durbin said on CBS' “Face the Nation.”

“He'll face a challenge, I'm sure, if he oversteps what the law requires when it comes to his responsibility as commander in chief,” Durbin added.

Levinson said those who could have legal standing to sue could include members of the military or other groups affected by the provisions.

Jonathan Turley, a law professor at George Washington University, agrees that the provisions Trump invokes would likely be challenged in court.

But, Turley said, “the court fight could give Trump an exit ramp from the current government shutdown.”

“He could simply blame the courts while insisting that he did act in fulfillment of his campaign pledges,” Turley said.

Have other presidents issued national emergencies?

Yes, usually in times of major crises facing the country. National emergency declarations are not uncommon for the U.S. and sometimes go unnoticed.

Currently there are more than two dozen active national emergencies in the country.

In 2015, President Obama declared a national emergency, citing “increasing prevalence and severity of malicious cyber-enabled activities originating from, or directed by persons located, in whole or in substantial part, outside the United States constitute an unusual and extraordinary threat to the national security, foreign policy, and economy of the United States.”

Presidents must renew national emergencies annually because the statute lets emergencies automatically expire after one year.

Turley said the problem with presidential emergencies is “not how to declare one but how to end one.”

“No one wants to declare an emergency over and suffer the political consequences,” he said. “Thus we have national emergency declarations governing Iranian property, weapons of mass destruction … and a host of other matters.”