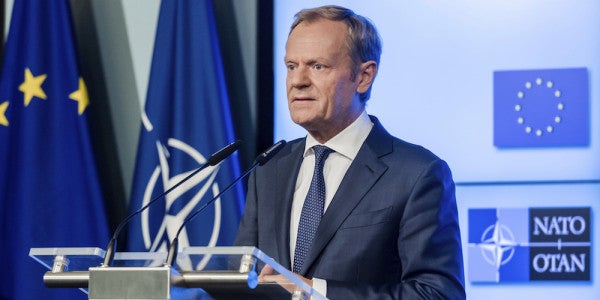 European Union President Donald Tusk on Tuesday delivered a strongly worded statement directed at President Donald Trump amid his ongoing criticism of NATO: “Appreciate your allies. After all, you don't have that many.”

As Trump was set to travel to Brussels for a NATO summit, Tusk said, “I would like to address President Trump directly, who for a long time now has been criticizing Europe almost daily for, in his view, insufficient contributions to the common defense capabilities, and for living off the U.S..”

“Dear President Trump: America does not have, and will not have a better ally than Europe,” Tusk added. “Money is important, but genuine solidarity is even more important.”

The EU president said he hoped Trump would remember Europe's strong relationship with the US as he meets with Russian President Vladimir Putin in Helsinki in the coming days.

EU President Tusk's message to President Trump ahead of NATO summit: “Dear America, appreciate your allies, after all, you don’t have that many.” pic.twitter.com/3UGJlqKOEE

Tusk's remarks come after sustained criticism of NATO by Trump.

On Tuesday, Trump tweeted, “Getting ready to leave for Europe. First meeting – NATO. The U.S. is spending many times more than any other country in order to protect them. Not fair to the US taxpayer. On top of that we lose $151 Billion on Trade with the European Union. Charge us big Tariffs (& Barriers)!”

Trump's statements on the way NATO operates and is funded have often been misleading.

Trump's suggestion the US provides protection for other NATO member states glosses over the founding premise of the alliance: collective defense. In this sense, all of the member states provide protection for one another. Furthermore, all member states contribute to NATO's overall budget based on their national income, with the U.S. providing about 22% of the budget.

In other words, the U.S. government's contribution to NATO is proportional, and many have criticized Trump for claiming Europe is taking advantage of the U.S. in this regard.

Trump's attacks on NATO come as many European countries express concern about Russia's aggression in the region, especially in the wake of the annexation of Crimea in 2014. In this context, Tusk and others seem concerned Putin will take advantage of the fact that Trump is not standing by key U.S. allies.

Meanwhile, as Trump spoke with reporters before heading off to Europe, he said his meeting with Putin could be the “easiest” aspect of his trip.