President Donald Trump returned to undermining NATO on Tuesday by singling out the alliance's smallest and newest member, Montenegro, following... 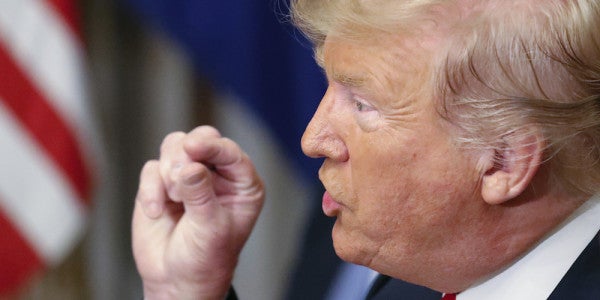 In an interview with the Fox News host Tucker Carlson on Tuesday, Trump was asked why the U.S. should answer the call to defend Montenegro — which was admitted to NATO in 2017 — if it were attacked.

NATO members can invoke a mutual-defense clause in the event of an attack on their soil, obligating all other states in the 29-member alliance to come to their defense.

“Let's say Montenegro, which joined last year … why should my son go to Montenegro to defend it from attack?” Carlson asked Trump.

“I understand what you're saying — I've asked the same question,” Trump said. “Montenegro is a tiny country with very strong people.”

Trump says he's bothered by provisions of NATO that require the US to come to the defense of other member countries. pic.twitter.com/2xY1FjBTSn

Tucker quickly interjected by saying he was “not against Montenegro” and added that any country, such as Albania, could have been applied in his hypothetical scenario.

But Trump added another wrinkle to the scenario and suggested Montenegro's “aggressive people” could spark a global conflict.

“By the way, they're very strong people — they're very aggressive people,” Trump said. “They may get aggressive. And congratulations, you're in World War III.”

Suggesting Montenegro could start a world war through aggression because of NATO, however, misconstrues the way Article 5 works. If Montenegro, a country with just over 620,000 people, started a war with Russia, it could not invoke Article 5 and require U.S. involvement because it would not be an attack on a NATO member but rather an attack from a NATO member.

At the same time, Montenegro has indeed had tensions with Russia, with the small country experiencing what it has described as an attempt by Russian nationalists to kill its prime minister in 2016.

Describing NATO countries as “aggressive” for engaging in legitimate defense of their homeland is a hallmark of Russian messaging in its opposition against the alliance.

Trump attacks the cost of NATO

Trump's comments echoed his previous assertion that NATO members were not contributing enough on domestic and joint defense spending.

Trump suggested that the U.S. bore the short end of the stick. NATO members contribute to the organization's funding on an agreed cost-share formula based on their gross national income; the U.S. supplies 22% of that funding.

“It was very unfair. They weren't paying,” Trump told Carlson, speaking more generally about other NATO members. “So not only are we paying for most of it, but they weren't even paying and we're protecting them. Add that to your little equation on Montenegro.”

During his summit last week with other NATO countries, Trump blasted the other alliance members and demanded that they increase their defense spending to “2% of GDP IMMEDIATELY.” A non-legally-binding guideline states that members should reach 2% by 2024.

Tensions also flared in the NATO summit after Trump accused Germany of being “totally controlled by Russia” for receiving a large share of its oil and natural gas from it.