President Donald Trump on Monday unloaded on the U.S.'s European allies, and appeared to threaten to pull out of NATO,... 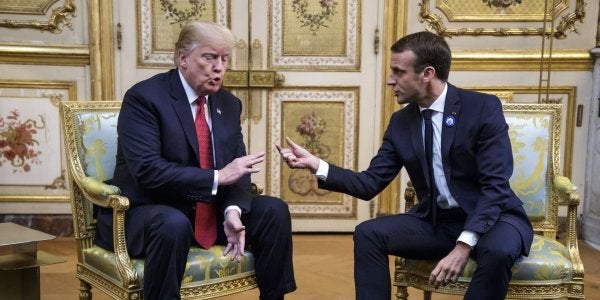 President Donald Trump on Monday unloaded on the U.S.'s European allies, and appeared to threaten to pull out of NATO, upon returning home from a World War I memorial event in Paris, where French President Emmanuel Macron openly rebuked Trump's political philosophy in a speech on Sunday.

Trump returned to his old talking points— that the U.S. is treated unfairly within NATO while maintaining trade deficits with those countries — as Macron talked up the idea of a European army that would in part serve to protect the continent from the U.S.

Macron floated the idea before Trump's trip, and Trump described it as “very insulting.”

“Just returned from France where much was accomplished in my meetings with World Leaders,” Trump tweeted on Monday morning.

Trump typically condemns any kind of trade deficit with any country, though the metric usually indicates the U.S. has a strong economy that can afford to buy more from a given country than that country can buy from the U.S.

“I told them that this situation cannot continue,” Trump said of the military and trade relationships with some of the U.S.'s closest allies. He described the situation as “ridiculously unfair.”

The U.S. by far spends the most in NATO, both on its own defense budget and on programs to increase the readiness and capabilities of its European allies.

In 2014, NATO countries agreed to raise their defense spending to 2% of gross domestic product by 2024. So far, only five countries — mainly in eastern and central Europe where the threat of Russia looms large — have met that pledge.

Since his campaign days, Trump has demanded NATO countries meet that 2% figure, or even double it, immediately.

The metric of percentage of GDP spent on the military can also be deceptive. Defense spending has broad and differing definitions around the globe.

Greece is one of the few NATO countries that meet the 2% spending mark, but it spends much of that on pensions.

NATO's newest member, Montenegro, could spend 2% of its GDP on defense, which would be only $95 million, just over the cost of one U.S. Air Force F-35.

Trump on Monday also lamented the money the U.S. has spent protecting other countries, saying the U.S. gained nothing from the alliances other than “Deficits and Losses.”

“It is time that these very rich countries either pay the United States for its great military protection, or protect themselves…and Trade must be made FREE and FAIR!” Trump concluded, appearing to wave the idea of a U.S. pullout from NATO.

Article 5 of the NATO treaty, the alliance's key clause that guarantees a collective response to an attack on a member state, has been invoked only once in NATO's history: after the September 11, 2001, terrorist attacks on the U.S.

The result was a collective response from NATO countries that still have forces fighting and dying alongside U.S. forces in Afghanistan today.