Trump At Naval Academy Graduation: ‘We Are Not Going To Apologize For America’

President Donald Trump told the U.S. Naval Academy’s graduating class Friday that the nation is “respected again” abroad and that... 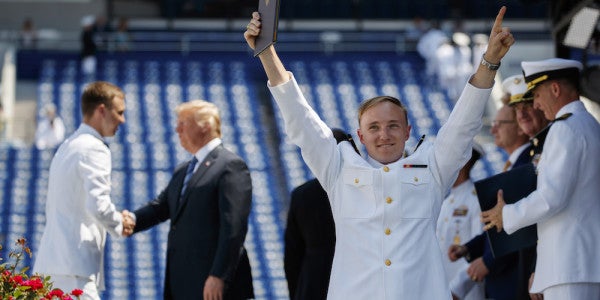 President Donald Trump told the U.S. Naval Academy’s graduating class Friday that the nation is “respected again” abroad and that “We are witnessing the great reawakening of the American spirit.”

On a warm, cloudless day, Trump told 783 men and 259 women graduates that the country has rediscovered its identity.

“In case you haven’t noticed, we have become a lot stronger lately. A lot,” the president said at Navy-Marine Corps Memorial Stadium, which was filled with about 30,000 family members and friends. “We are not going to apologize for America. We are going to stand up for America. No more apologies.”

The president recited a litany of American military achievements and said the country “will have the strongest military than ever before, and it won’t even be close.”

Appearing to enjoy himself, he made a point of remaining afterward to shake hands with each graduate as they were summoned to the outdoor stage.

In their graduation rehearsals, the midshipmen said they had practiced how each would shake hands with the president.

Trump told them he had the option to leave after his speech or shake hands with only the top 100 in the class.

A Midshipman points to the sky after receiving his diploma during a graduation ceremony at the U.S. Naval Academy with President Donald Trump, Friday, May 25, 2018, in Annapolis, Md.Associated Press/Evan Vucci

Most family members and friends in the stands stood when Trump was introduced, and some midshipmen clapped

But there was some unease about his appearance before he arrived.

Two 2001 Naval Academy graduates wrote in a Baltimore Sun opinion piece that Trump did not personify the institution’s tradition of “making big choices laden with courage and self-sacrifice.”

Trump, wrote Daniel Barkhuff and William Burke, “could never do what we ask our U.S. Naval Academy graduates to do. He is a physical coward, a liar and no leader at all.”

Presidents traditionally deliver graduation remarks in the first year of their administration. But Vice President Mike Pence addressed the class last year because Trump was attending the Group of Seven forum for industrialized nations.

After Trump was confirmed as the speaker, several midshipmen expressed reservations in emails to Stephen Wrage, a professor in the political science department. “We are under no obligation to clap for Donald Trump,” one midshipman wrote, according to a Washington Post piece written by Wrage, who declined further comment.

But the academy is about decorum and respecting authority. “Our personal thoughts, I wouldn’t be surprised if people had that kind of opinion about the president,” said graduate Christy Tse of Ellicott City, whose brother is a sophomore at the academy and sister is an incoming freshman.

“It’s the president of the United States of America,” said Connor McGuire, who is becoming a Marine like his father. “The opportunity to go up and shake his hand and be able to receive a diploma – it’s a massive honor.”

Without referring to Trump by name, Navy undersecretary Thomas M. Modly told the graduates before the president’s speech that they were to serve under a commander in chief “who believes what President Reagan believed — that our national security should be guided by the clearest if principles. That principle is peace through strength.”

Last year, a speech delivered by Trump at the U.S. Coast Guard Academy extolled the “glorious missions” of the graduates. He also spoke of his accomplishments in his first year and how he unfairly he believes he is treated by the media.

Barack Obama, Trump’s predecessor, addressed academy graduates in 2009 and 2013, saying in the second speech that “honor, like character, is what you do when nobody is looking.”

The usual emotion displayed by families at graduation ceremonies seemed magnified at the academy, owing to the rigors of the institution and the fact that graduates’ assignments can take them far from home and sometimes in harm’s way.

The graduates receive commissions as Navy ensigns or second lieutenants in the Marine Corps and serve at least five years.

Academy Superintendent Walter E. “Ted” Carter told the class that their journey began in Annapolis with 1,191 students arriving for Plebe Summer. Nine of them quit during the grueling training — the fewest ever.

“It’s still a record,” he said. Eighty-eight percent of the original class graduated.

Tse will soon be headed to a ship in the Pacific. “It’s bittersweet knowing I probably won’t see all my classmates for the next five years. I’ll be in the middle of the ocean on a ship. We’ll be scattered across the world.”