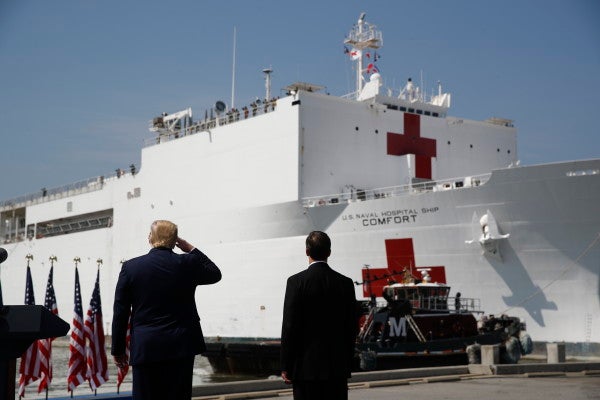 NORFOLK, Va. — President Donald Trump visited Naval Station Norfolk Saturday to see off the USNS Comfort as it headed to New York with medical staff and hospital beds to combat the coronavirus pandemic.

“This great ship behind me is a 70,000-ton message of hope and solidarity to the incredible people of New York, a place I know very well, a place I love,” Trump said, standing in front of the gleaming white hull of the Comfort. “We’re here for you. We are fighting for you and we are with you all the way and we always will be. You have the unwavering support of the entire nation.”

The Navy hospital ship, which is crewed by civilian mariners and gets most of its medical staff from Naval Medical Center Portsmouth, should arrive Monday.

The plan is for the ship to take patients needing hospital care that are not infected with the virus, freeing up much-needed space in the city’s hospitals. The Comfort’s sister ship, the USNS Mercy, arrived Friday in Los Angeles on a similar mission. “For several weeks, the Department of Defense has been surging personnel capabilities and equipment to help slow the spread of the virus,” Secretary of Defense Mark Esper said in his introduction of the president. “Thousands of National Guard troops are mobilized across the country, conducting a variety of essential tasks ranging from planning to logistics to medical support. Active duty units are moving critical supplies and equipment and medical personnel to some of the nation’s most heavily impacted areas.”

More than 120 Navy Reserve volunteers, many medical professionals, reported to the Military Sealift Command’s ship on Wednesday for the mission. The Navy has yet to release how many medical personnel are headed to New York. The Mercy, like the Comfort, can carry about 1,200 medical and support staff. The Navy currently has about 800 in Los Angeles.

Trump said the Comfort was quickly made ready to depart. A process that was supposed to take weeks took just four days, he said.

“The Comfort will arrive at Pier 90 in Manhattan on Monday, three weeks ahead of schedule,” Trump said. “Its crew will begin treating patients on Tuesday. It will be met in New York harbor by Governor Cuomo, who I just spoke with. He’s very excited.”

In his Saturday press conference, New York Governor Andrew Cuomo said he would welcome the ship “with open arms.” The Comfort was converted from an oil tanker and delivered to the Navy in December 1987. It has been based in Norfolk since 2013 and contains more than 1,000 hospital beds, 12 fully-equipped operating rooms, a CAT-scan, medical laboratory, pharmacy, large helicopter landing deck, two oxygen producing plants and many other services.

It has deployed all over the world to aid in crises and war.

In 1991, it responded to Operations Desert Shield and Desert Storm, treating more than 8,700 patients and performing more than 330 surgeries that couldn’t have been done in combat hospitals ashore.

After 9/11, the Comfort responded to the World Trade Center attack, providing meals, housing, medical and psychological services to those working on recovery efforts at ground zero. Last year, it traveled to Central and South America in response to the Venezuela political and economic crisis.

Trump said the nation is at war with an invisible enemy, but that America would win.

Trump and Esper watched the Comfort pull out of port. A band played while Trump saluted and waved at the men and women standing on deck as the ship started its journey to New York.