How Officials Are Preparing Trump For His North Korea Meeting

There's still no confirmed date, meeting site or even a U.S. ambassador in South Korea to run interference. But officials... 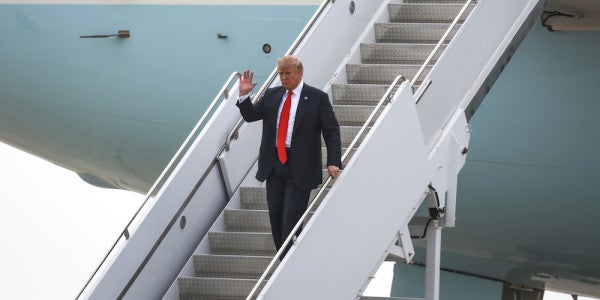 There's still no confirmed date, meeting site or even a U.S. ambassador in South Korea to run interference.

But officials at the CIA, Pentagon, State Department and elsewhere are scrambling to prepare a potentially historic summit next month between President Trump and North Korean leader Kim Jong Un — while working to lower expectations that the two will achieve a nuclear breakthrough.

Trump stunned allies and apparently even the North Koreans when he abruptly accepted a surprise invitation, passed by visiting South Korean authorities last month, to meet with Kim after their own sit-down with the enigmatic leader in Pyongyang. The White House says the proposed summit is on track for sometime in May, although Kim has yet to comment publicly one way or the other.

From logistics to content to the details of nuclear weapons, interagency teams across Washington are racing to prepare briefing materials and negotiating plans intended to bolster Trump's ultimate goal of persuading Kim to give up his nuclear arsenal, now estimated to be more than a dozen weapons.

Kim, in turn, made his first known trip out of North Korea since he took office in 2011, visiting Beijing last month to meet Chinese President Xi Jinping, sending a clear message that his ties with neighboring China run deep and he won't be pushed around.

To hear some U.S. officials tell it, one possible outcome is a high-profile, much-photographed get-together of two headstrong leaders who only recently were hurling insults at each other, producing little substantive agreement but with both claiming some sort of victory.

Related: They Fought Against Commies In Korea. And They Say Trump Is Making The Right Move »

Trump will trumpet becoming the first U.S. president to sit down with a North Korean leader, a diplomatic achievement that may or may not prove useful to easing tensions in northeast Asia. Kim will claim the global stature that sitting down with a U.S. president awards him, finally achieving the elusive goal that his father and grandfather — his predecessors in office — both had sought.

Beyond that, U.S. officials say, success may well be declared if the two leaders do not storm angrily from the room and renew threats of nuclear Armageddon. Some experts say a best-hope scenario may be for Trump and Kim to show a willingness to engage — and then step back to let veteran diplomats and subject experts carry out negotiations.

Some of Trump's advisors believe he and Kim can untangle the impasse on the Korean peninsula, and open the way for more talks. Others say such a high-level engagement doubles the risk for failure and even military conflict if the summit goes south.

People familiar with Trump's thinking insist he is approaching the summit with realistic expectations.

“I don't think Trump is naive about this, just that he has a very positive view of his deal-making ability, even if it takes a few rounds,” Hanson said.

Planning for a major summit, no less the first one ever with the untested leader of a nuclear-armed adversary, would challenge any administration's diplomatic skills. In this case, the White House has no top diplomat in place: Trump fired Secretary of State Rex Tillerson last month and the Senate has yet to confirm Mike Pompeo to replace him.

There is only an acting assistant secretary of State for East Asia, and Trump has yet to nominate a U.S. ambassador to South Korea. More importantly, perhaps, the special envoy for North Korea abruptly retired in February, reportedly over policy differences with the White House, and has not been replaced.

The Trump administration thus has no clear point person to coordinate policy toward North Korea. For now, National Security Council officials are taking the lead, with input from the State Department, CIA, the Pentagon and other parts of the national security apparatus.

“We're going ahead in full faith and good faith” that the meeting will take place in May, said Heather Nauert, the State Department spokeswoman.

“There's a lot of movement right now,” said Alex Wong, the deputy assistant secretary of State for East Asian affairs, referring to the preparations. “It's understandable a lot of questions arise about how we're going to manage all this movement and move toward” staging a summit.

Among the questions are where Trump and Kim will meet. Likely possibilities include Panmunjom, the so-called truce village in the Demilitarized Zone that separates North and South Korea.

The U.S. team has conferred regularly with South Korean officials, who are keen to see the meeting happen. Japanese Prime Minister Shinzo Abe will huddle with Trump at his Mar-a-Lago resort in Florida on April 17.

The complexities of nuclear diplomacy cannot be overstated, experts say. As president, Trump has shown little interest in policy details, preferring to rely more on his gut than on briefing papers. That worries diplomats and others who have dealt with North Korea in the past.

“I can't see a president who believes preparation is terribly overrated, expertise is not necessary, dealing with these very complicated issues,” said Robert Gallucci, who served as chief U.S. negotiator in talks to end a nuclear crisis with North Korea in 1994, when the country's nuclear program was still in its infancy.

North Korea has conducted six nuclear tests since 2006. The most recent, in September, was far more powerful than the U.S. bombs dropped on Japan at the end of World War II. Pyongyang also has stepped up its missile tests since Trump took office, including the first intercontinental ballistic missiles capable of reaching the continental United States, although not yet of delivering a nuclear warhead.

Officially, the position of the United States and its allies is to demand a “complete, irreversible and verifiable” denuclearization of North Korea, requiring Pyongyang to give up its nuclear arsenal and allow United Nations nuclear inspectors full access to the country's enrichment facilities and weapons depots to ensure compliance.

Even if North Korea were to agree — which few diplomats think remotely likely — experts question whether that kind of accord could be verified since nuclear warheads, as opposed to missile systems to deliver them, could be hidden. Indeed, Trump and his allies use that argument to denounce the 2015 accord designed to block Iran from building a nuclear weapon.

Within the Trump administration, some officials believe the U.S. ultimately will have to accept a North Korea with nuclear weapons — a tacit recognition of the country as a nuclear power, just as Pyongyang long has sought.

The more realistic U.S. goal, they say, would be to get Kim to agree to freeze production of nuclear fuel and for the U.S. to find a way to ensure his ballistic missiles could not carry out a nuclear attack on the United States — essentially keeping the threat from getting worse.

For his part, Kim is expected revive his demands to remove the 23,400 U.S. troops stationed in South Korea, and to ease the sanctions that have helped cripple his country's economy. He also wants a peace treaty to formally end the Korean War, which sputtered to a close in 1953 with a cease-fire that has left the two Koreas a global hot spot for seven decades.

Trump has given mixed signals about whether he wants to keep U.S. troops in the region, but the Pentagon almost certainly would resist a full-scale withdrawal given U.S. treaty commitments with Seoul and Tokyo.

Another unknown is the impact of John Bolton, who is expected to take office next week as Trump's national security advisor. Bolton, an avowed hawk, has advocated military attacks on North Korea in the past.

Diplomats say the geopolitical landscape is not radically different from previous U.S. negotiations with North Korea, which all ultimately ended in failure. What is different now is Kim has a stronger hand — he has more nuclear weapons and more sophisticated ballistic missiles, although not yet a capability to launch a nuclear strike on the U.S.

Christopher Hill, a former senior U.S. diplomat who helped lead the last round of nuclear negotiations with North Korea, the so-called six-party talks that ran from 2003 to 2009, said Trump's team should prepare set demands and a timeline to meet them.

Without a “preordained outcome,” Hill said, the summit could backfire.

“This is a president who rejects the notion of history, of knowledge,” but prefers to rely only on his “capacity to feel the moment and use his intuition,” Hill said. “That is not a recipe for success.”