President Donald Trump's administration on Wednesday will announce plans to send federal agents to more U.S. cities to crack down on violent crime as he emphasizes a "law and order" mantra going into the Nov. 3 presidential election 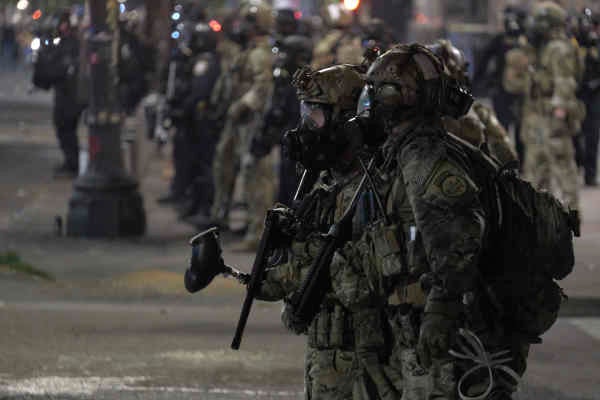 WASHINGTON (Reuters) – President Donald Trump announced a plan on Wednesday to send federal agents to more U.S. cities to crack down on violent crime in an escalation of his “law and order” theme going into the Nov. 3 presidential election.

Trump, joined at a White House event by Attorney General William Barr, unveiled an expansion of the “Operation Legend” program to include cities such as Chicago and Albuquerque, New Mexico, in a further effort by federal officials to tackle violence.

Trump said “we have no choice but to get involved” with a rising death toll in some major cities.

The program involves deploying federal law enforcement agents to assist local police in combating what the Justice Department has described as a “surge” of violent crime.

Barr sought to differentiate the initiative from the use of federal agents from the Department of Homeland Security to quell unrest in Portland, Oregon, where local authorities have complained about the federal involvement.

He said the law enforcement personnel from a variety of agencies will serve as “street” agents and investigators who will be working to “solve murders and take down violent gangs.”

The Republican president has sharply criticized Democratic leaders for presiding over cities and states that are experiencing crime waves, using the issue as part of a “law and order” push he hopes will resonate with his political base. Trump is trailing Democrat Joe Biden in national opinion polls.

But the initiative risks inflaming tensions running high in many major cities in the wake of the death in police custody of Black man George Floyd.

It is not unusual for federal law enforcement to work alongside local partners. The Justice Department official said “Operation Legend” would provide additional resources to cities suffering from “traditional” violent crime.

Trump has emphasized a robust policing and military approach to the protests across the United States about racial inequality after Floyd's death in Minneapolis.

The White House has sought to focus on city crime even as Trump's approval numbers plummet in response to his handling of the coronavirus pandemic.

New York Governor Andrew Cuomo has said federal intervention was not required to help with violence in New York City, and Chicago Mayor Lori Lightfoot has also urged Trump not to send unidentified federal agents to her city.

“Operation Legend” is named for LeGend Taliferro, a 4-year-old boy who was shot and killed while he slept early June 29 in Kansas City, Missouri, according to the Department of Justice's website.