The Trump administration is preparing to divert $7.2 billion from the Pentagon's budget to fund the president's US-Mexico border wall this year, according to a Washington Post report published Monday 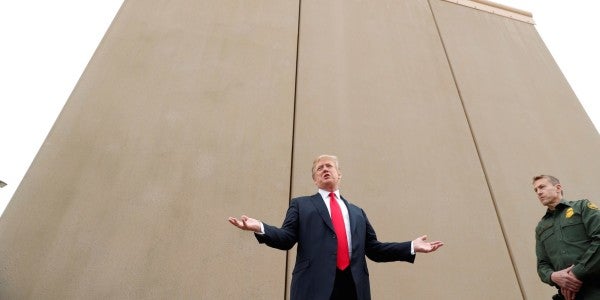 The Trump administration is preparing to divert $7.2 billion from the Pentagon’s budget to fund the president’s U.S.-Mexico border wall this year, according to a Washington Post report published Monday.

The reported figure is five times greater than $1.4 billion Congress allotted for the project in the 2019 and 2020 federal budget. The White House initially demanded $5 billion for the construction project in 2018, before it acquiesced to the lower figure from Democrats amid the longest-ever federal government shutdown.

If the tentative plan follows through, it would mark the second time that the administration siphoned funds from the Defense Department to pay for the project. The funds will reportedly be used to pay for 885 miles of fencing by 2022, far more than the roughly 100 miles of new barriers on the southern border.

Around $3.6 billion was redirected from military construction projects to pay for the border barrier last year, after President Donald Trump declared a national emergency. Trump justified the construction of the wall after claiming the country was being flooded “with drugs, with human traffickers, with all types of criminals and gangs” across the southern border.

The new plan suggests the administration will increase the amount taken from military construction projects to $3.7 billion this year.

According to the plans, the administration is also preparing to divert $3.5 billion from the military’s counter-drug operations, which is $1 billion more than it took in 2019.

The Defense Department referred inquiries on the matter to the White House. The White House did not respond to requests for comment on Monday evening.

The report comes days after the White House scored a crucial victory on Thursday. The 5th US Circuit Court of Appeals lifted a lower-court’s injunction that prevented the administration from spending the diverted $3.6 billion to pay for the border project.