President Donald Trump is heaping praise on the National Guard for defending the area around the White House during recent protests, but a number of Guard members have said they are troubled by their mission in the nation's capital 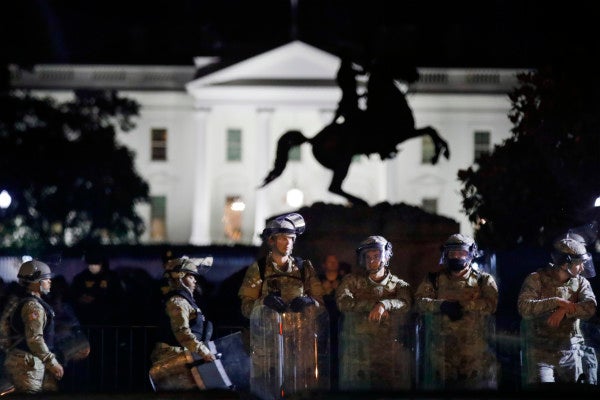 President Donald Trump is heaping praise on the National Guard for defending the area around the White House during recent protests, but a number of Guard members have said they are troubled by their mission in the nation's capital.

“Our great National Guard Troops who took care of the area around the White House could hardly believe how easy it was,” Trump tweeted Thursday morning. “'A walk in the park,' one said.”

The president celebrated the ease at which the Guard and other law enforcement forces were able to “handle” protesters.

Our great National Guard Troops who took care of the area around the White House could hardly believe how easy it was. “A walk in the park”, one said. The protesters, agitators, anarchists (ANTIFA), and others, were handled VERY easily by the Guard, D.C. Police, & S.S. GREAT JOB!

The president's tweet comes on the heels of reports from Politico and The New York Times detailing feelings of shame among some Guard members, many of whom are people of color, who were called in to respond to protests against racial injustice and police brutality following the death of George Floyd in Minneapolis in late May.

The Times reported on Wednesday that some Guard members feel tired and demoralized, with one soldier saying he and some fellow soldiers were so ashamed by their mission that they hid their involvement from their families.

“Typically, as the D.C. National Guard, we are viewed as the heroes,” First Lt. Malik Jenkins-Bey, who served as acting commander of the 273rd Military Police Company during recent protests, told The Times, adding that last week was different.

Pvt. Si'Kenya Lynch, a member of the D.C. National Guard, told Politico that if she had not been activated to respond to the protests, she would have been among the protesters “to support the people.” Lynch said she “wanted to support what was right.”

One soldier, speaking on the condition of anonymity, told Politico that “as a military officer, what I saw was more or less really f—ed up.” He continued: “I'm here to support and defend the Constitution of the United States and what I just saw goes against my oath.”

“What I saw was just absolutely wrong,” he said.

The Guard member was referring to events around Lafayette Park on June 1, when law-enforcement units aggressively cleared protesters out for a presidential photo op at a nearby church following a speech in which Trump threatened to send in the military to quash unrest.

The scenes from that Monday have drawn significant criticism from hundreds of former defense, national security, and diplomatic officials.

“We have a lot of National Guardsmen who are struggling with this,” another Guard member told Politico. “Unlike in combat when you have an enemy, these are our neighbors, our friends, our family.”

An official National Guard press release acknowledged that the Guard was not always welcome during its mission.

“Mostly, everyone here is nice and understands why we're here,” Pfc. Zachary Pankow, a member of the Indiana National Guard who deployed to D.C., said in a statement.

The National Guard has stressed that its mission in D.C. was to help prevent violence and unrest so protesters could peacefully exercise their first amendment rights.

More than 40,000 National Guard troops were mobilized to respond to civil unrest in dozens of states across the country. That number began to decrease significantly this week.