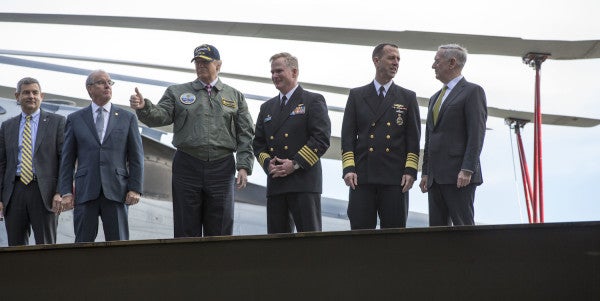 President Donald Trump chose a dramatic backdrop to tout his proposed $54 billion military spending boost on Thursday, standing on board the most technologically advanced —and most expensive — warship ever built.

Speaking on the USS Gerald R. Ford, a new aircraft carrier that came with an almost $13 billion price tag, Trump promised to make good on his campaign promise to expand the Navy’s 275-ship fleet to 350. It is the biggest proposed expansion since the early 1980s, and one that naval analysts warn will be immensely more expensive and time-consuming than the president may realize, given that current funds don’t even cover the cost of maintaining the current fleet.

Dressed in a Navy flight jacket with a “commander in chief” patch and matching cap, Trump was in his element on Thursday, marveling at the size of the ship and promising the gathered service members a “great rebuilding” of the Navy.

“We’re going to have, very soon, the finest equipment in the world,” he vowed, calling on Congress to pass his proposed $54 billion funding increase for the Pentagon and eliminate the defense spending caps.

“By eliminating the sequester and the uncertainty it creates, we will make it easier for the Navy to plan for the future and thus to control costs and get the best deals for the taxpayer which, of course, is very important, right?” he said.

In recent years the Navy’s size has ranged from 270 to 290 ships. Expanding it to Trump’s 350-ship goal would cost $25 billion a year over the next 30 years. This is more than 60 percent above the average amount allocated for shipbuilding in past years, according to a report from the Congressional Budget Office.

Trump said new warships like the USS Gerald R. Ford will be used to “project American power in distant lands.”

“Hopefully it’s power we don’t have to use,” he said. “But if we do they’re in big, big trouble.”

The expansion comes with an eye on China, which has rapidly upped its naval capacity in recent years.

“China has been building up its navy with gusto for the past twenty years or so, and it has replaced a lot of elderly Cold War-era junk with far more modern ships, planes and armaments,” said Jim Holmes, a professor of strategy at the U.S. Naval College who specializes in China.

China’s navy is expected to approach parity with the U.S. forces around 2020, but is focusing its forces in its own geographic region, while the U.S. Navy is spread across the world.

“If a 500-ship Chinese navy is concentrated in that very finite subset of the sea off China’s shores and a 350-ship U.S. Navy is scattered around places like the Persian Gulf, Mediterranean Sea and so forth, you can see how lopsided the mismatch in East Asia could become,” Holmes said.

Navy leaders plan to mitigate the imbalance in the numbers by arming U.S. vessels with more high-tech weapons.

“We’re betting that fewer high-quality ships beats many lower-quality Chinese ships,” Holmes said. “This is much the same calculation we made vis-a-vis the larger but somewhat backward Soviet Navy during the Cold War.”

A new Force Structure Assessment released after Trump’s election upped the Navy’s goal from 308 ships to 355, adding 18 attack submarines, one aircraft carrier, 16 surface combatants — cruisers and destroyers — four amphibious ships and eight other ships. A larger naval force will also need more uniformed sailors. The Navy has indicated that it will add up to 26,000 more sailors for a total of 350,000.

Even if shipbuilding rates are increased, it could take decades to achieve the proposed force. For example, even if the current rate of acquiring one aircraft carrier every five years is upped to one every three years, the proposed 12-carrier force would not be ready until 2030, according to a report by naval analyst Ronald O’Rourke.

All this is good news for U.S. shipyards and shipbuilders.

“The president has made it evident that American jobs and national security are two significant priorities for his administration,” Matthew Paxton, president of the Shipbuilders Council of America, told McClatchy in a statement after Trump’s speech on Thursday, expressing hope for the “hundreds of thousands of good-paying American jobs” that would boost the shipyard industry.

“Our industry and skilled workforce stands ready to continue building and repairing the fleet of the future,” he said.