President Donald Trump disavowed a controversial remark made by his national security adviser, John Bolton, as he appeared increasingly eager... 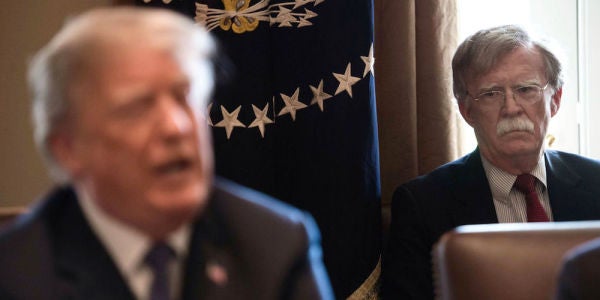 Bolton had spooked North Koreans recently by suggesting Pyongyang follow the path taken by Libya more than a decade ago, when that country abandoned its effort to build nuclear weapons in exchange for economic benefits and warmer relations. Within a few years, Libya’s leader, Moammar Gadhafi, lost his job and his life at the hands of Western-backed rebels.

“The Libyan model isn’t a model that we have at all,” Trump told reporters during a photo session with the visiting secretary general of NATO, Jens Stoltenberg. “We decimated that country.”

By contrast, Trump promised that if the United States reaches a deal with North Korea, Kim would “be running his country. His country would be very rich.”

The president also vowed that Kim would “get protections that will be very strong,” a sharp departure from the fiery rhetoric Trump used just months ago against the isolated despot and a promise that would appear to go far beyond what previous administrations have offered the communist dictatorship. Previous administrations have offered economic incentives and pledges not to take hostile action against the North Koreans, but have not said they would affirmatively protect the North.

Trump also implied Thursday that China’s President Xi Jinping may be trying to influence the North Koreans to take a harder line with the U.S., perhaps in response to U.S. pressure on trade.

Trump’s efforts to soothe Pyongyang could prevent Kim from following through on the threat to call off the summit. But his words highlighted his eagerness to get a deal — an emotion that even some of Trump’s aides fear could lead him to give up too much at the negotiating table.

His disavowal of Bolton’s remark could also undermine Trump’s ability to present a unified front for his administration as he prepares to face off with a country that for decades has defied international laws and scuttled American efforts to rein in its nuclear program. Americans who have negotiated with Kim and his father, Kim Jong Il, who ruled before him, say the country’s authoritarian leadership has a history of trickery and dishonest dealing.

“When the president openly disagrees with his national security adviser about the objective of talks, that’s going to encourage North Korean mischief, and it’s going to discourage allies who depend on the United States to be steady,” said Michael J. Green, who served as senior Asia adviser to President George W. Bush during a prior effort to negotiate with North Korea. Those talks also included South Korea, Japan, China and Russia.

“It appears he’s going with his gut, but when the stakes are this high, that can have real consequences if played wrong,” Green added.

John Park, director of the Korea Working Group at the Harvard Kennedy School of Government in Cambridge, Mass., said Trump was making clear to North Korea that he is focused on the deal above all else. The North Koreans, as they threatened to withdraw this week, also said they felt misled about the extent of joint South Korean-U.S. military exercises. By laying out their concerns in public without actually withdrawing, they were intentionally leaving Trump a way to preserve the summit, Park said.

“The way that things are playing out right now, the choice for the president is Bolton or the summit,” Park said. “The early signs are that he’s prioritizing the summit,” he said, adding that he did not think Bolton would actually lose his job.

During the impromptu question-and-answer session, Trump returned twice to China’s role, saying the North Koreans began making more provocative statements shortly after a recent meeting between Kim and Xi, the second between the two. China is North Korea’s most important political and economic ally.

“There has been a big difference since they had the second meeting,” Trump said.

“President Xi could be influencing Kim Jong Un,” Trump added, noting the disputes between the U.S. and China over trade, which are the subject of meetings this week between U.S. and Chinese officials.

But experts in the region say that China — even as it is frustrated with Trump’s trade demands — generally supports U.S. efforts to broker peace with North Korea, especially if a deal includes a reduction of American troops in the region.

Trump added that U.S. and North Korean diplomats continue to meet to plan for the summit.

“Nothing has changed on North Korea that we know of,” he said. “We’ll see what happens. If the meeting happens, it happens.” If not, “we go on to the next step.”

The State Department also insisted Thursday that preparations were continuing. Secretary of State Mike Pompeo, who has met twice with Kim, has been on the telephone this week with South Korean officials to assure them that the meeting is still on track. “We always knew there would be twists and turns,” a senior State Department official said.

During his first year in office, Trump had dismissed diplomacy with Kim as a waste of time, taunting the North Korean leader as “Little Rocket Man” and threatening to overwhelm North Korea with “fire and fury” if it threatened the United States militarily. But Trump’s tone changed in March after he accepted an invitation, issued via South Korea, to meet one-on-one with Kim in a first-of-its-kind summit.

Since then, Trump has called Kim “honorable,” praised him for releasing three American prisoners last week and spoken hopefully about the potential for peace.

But the two sides remain far apart on their objectives for the meeting. Trump has insisted North Korea dismantle its entire nuclear program, giving up a weapons effort that the Kim dynasty has spent decades and huge amounts of money to secure. Most experts in the region believe the country would be extremely unlikely to take that step. It’s unclear whether Trump would ultimately accept something short of that.