As President Trump scrambles to find someone to pay for his border wall, the Army Corps of Engineers have reportedly provided him with a new piggy bank 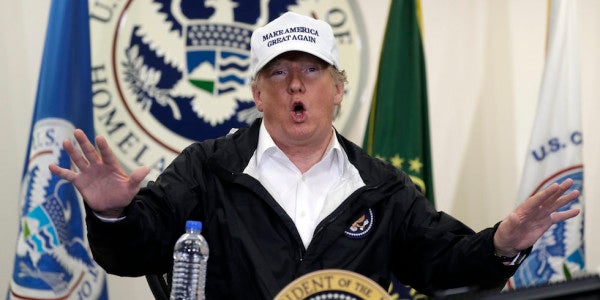 As President Trump scrambles to find someone to pay for his border wall, the Army Corps of Engineers have reportedly provided him with a new piggy bank: Puerto Rico.

The Army Corps' $13.9 billion budget has been divvied up to subsidize various projects around the country, but the President has been briefed on a proposal that could see him dip into those funds, three officials told NBC News.

Among the planned projects are $2.5 billion for post-Hurricane Maria reconstruction projects in Puerto Rico, nearly half of the $5.7 billion proposed cost of Trump's 234-mile border wall, according to NBC.

The President has long resisted providing financial aid to the millions of Americans still dealing with Maria's devastating effects in Puerto Rico.

“The people of Puerto Rico are wonderful but the inept politicians are trying to use the massive and ridiculously high amounts of hurricane/disaster funding to pay off other obligations,” he tweeted in late October. “The U.S. will NOT bail out long outstanding & unpaid obligations with hurricane relief money!”

He has also regularly refused to accept the official death toll, set at 2,975 people, and accused Democrats of trying to “make me look as bad as possible.”

Other Army Corps funds could also be reallocated from flood prevention and protection projects in California, according to NBC News.

But Democrats would still be in a position to block the funds from being moved if this plan goes ahead.

“There are several discussions being had that would aim to protect Texas, California and Puerto Rico's disaster recovery dollars from being used for the unintended purpose of an expensive and ineffective wall,” a congressional source involved in ongoing discussions told the Daily News.

“It would be beyond appalling for the President to take money from places like Puerto Rico that have suffered enormous catastrophes, costing thousands of American citizens lives, in order to pay for Donald Trump's foolish, offensive and hateful wall,” she said in a statement.

“Siphoning funding from real disasters to pay for a crisis manufactured by the President is wholly unacceptable and the American people won't fall for it. My Democratic colleagues in Congress and I will fight such a move with every ounce of energy we have.”

Trump is currently refusing to sign a budget that does not include $5.7 billion for his wall, while Democrats refuse to put the money into a budget.

The government has been shut down for 20 days.

WATCH NEXT: A Time-Lapse Video Of Wall Construction