Trump Meets With Putin Alone For 2 Hours, Blames US For Poor Russia Relations

HELSINKI, Finland — President Trump slammed the special counsel's investigation into his campaign's possible election collusion with Russia during a... 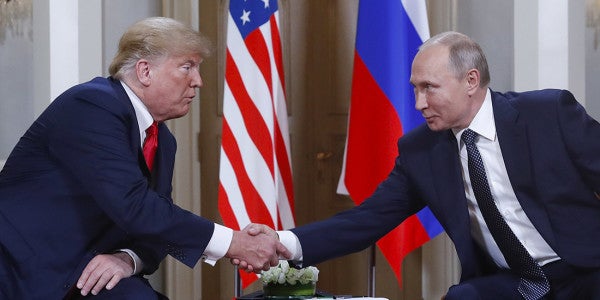 HELSINKI, Finland — President Trump slammed the special counsel's investigation into his campaign's possible election collusion with Russia during a stunning news conference Monday alongside President Vladimir Putin, and he blamed the United States for relations with Moscow that he said have “never been worse.”

When Trump was asked by a U.S. reporter why he believes Putin, who denied Russian interference in the 2016 election, rather than his own intelligence officials, Trump replied, “I don’t see any reason why” Russia would interfere.

More than once he condemned the probe of special counsel Robert S. Mueller III, which on Friday brought indictments of 12 Russian intelligence officials, calling it “a disaster for our country.”

HEADLINES: Trump declines to criticize Putin in defense of US government interests. Putin criticizes Trump (for exiting Iran deal) and does not deny having compromising material on Trump

Trump spoke yet again about his clear electoral college win over Hillary Clinton and lamented the “cloud” the investigation has cast over his victory. When Putin was asked why Americans should believe his denials, Trump first answered for him, falsely saying that the Russia probe only came about because Democrats were looking for an excuse for their loss.

Putin, in turn, offered his own, somewhat surreal response to the question that had been intended for him.

“As for who to believe, who you can’t believe, can you believe at all — you can’t believe anyone,” Putin said, dismissing the U.S. intelligence findings and the Mueller probe as based on “rumors.” He added, “There's no evidence when it comes to the actual facts.”

Putin did not shy away from the question of whether he wanted Trump to win the 2016 election.

“Yes, I did,” he said, as Trump smiled beside him.

Putin, again in answer to a U.S. reporter’s question, didn’t directly deny that Russia had compromising material on Trump, but instead deflected. He said he’d heard “these rumors” that Moscow had gathered embarrassing material while Trump was there in 2013, and added that people should “disregard” them.

His answer to whether he has kompromat on Trump.

Putin: I didn’t even know Trump was in Moscow at the time.

Putin knows CONGRESSIONAL TESTIMONY and much more evidence shows he knew Trump was in Moscow, were even arrangements for the two to meet.

Earlier, Trump declared a “very good start” to his meetings with Putin after they were alone together about two hours — just after he blamed the United States for the frosty state of relations between the two countries.

“I think it's a good start. Very, very good start for everybody,” Trump told reporters as the two leaders joined aides for a working lunch.

“Everybody” will have to accept the president’s word for that because only translators sat in with them, to the consternation of even some administration officials. Before their private session, Trump said to Putin, offering his hand, “We have a lot of questions, and hopefully we'll come up with answers. It's great to be with you.”

I never thought I would see the day when our American President would stand on the stage with the Russian President and place blame on the United States for Russian aggression. This is shameful.

Among the issues discussed, he listed trade, nuclear weapons and China, making no mention of Russia’s interference in the U.S. election, the poisoning of people in Britain by a Russian nerve agent or the conflicts in Ukraine and Syria.

“We have not been getting along,” Trump said, “but I think we will end up having an extraordinary relationship.”

“Getting along with Russia is a good thing, not a bad thing,” he added.

Putin said little, offering a more casual, almost indifferent demeanor as Trump spoke. He said he looked forward to “continuing the dialogue we have started.”

The two leaders were scheduled to meet for 90 minutes, with only interpreters in the room, at Finland's presidential palace, an ornate yellow-colored building adjacent to the city's harbor.

Putin, as he often has in meetings with other foreign leaders, arrived 45 minutes late, his plane touching down at the time when his first meeting with Trump was originally scheduled to begin.

Following the meetings, the two leaders were scheduled to hold a joint news conference, although it's unclear if they will take questions from reporters or simply make statements.

Trump, who has sought a better relationship with the Russian autocrat, has casually lowered expectations for Monday's talks and been remarkably open about not having a clear agenda, even as he's mentioned several discussion topics he plans to bring up.

On Monday morning, he fired off a tweet blaming the U.S. for the poor state of relations between the two countries.

Our relationship with Russia has NEVER been worse thanks to many years of U.S. foolishness and stupidity and now, the Rigged Witch Hunt!

Russia's Ministry of Foreign Affairs “liked” the tweet from its official account — not a surprise, given Trump's eagerness to blame the U.S. government, not Putin, who sanctioned Russia's interference in the 2016 presidential election, according to U.S. intelligence and law enforcement officials.

Hours later, shortly after Putin's plane touched down in Helsinki, the same Russian account retweeted Trump's statement with the comment: “We agree.”

Dating back to his presidential campaign, Trump has raised eyebrows with his approach to Putin, offering comments notably more conciliatory than those typical of American politicians. His statements about the Russian have stood in stark contrast to his often harsh and insulting rhetoric toward other world leaders and his political adversaries in both parties.

Do you think Putin will be going to The Miss Universe Pageant in November in Moscow – if so, will he become my new best friend?

Trump has not tempered his positive tone toward Putin even amid a special counsel investigation into possible collusion by his campaign associates with Russians during the 2016 presidential race. Rather,Trump has blamed the probe, which he has labeled a “witch hunt,” for being an impediment to improved relations with Russia.

Since taking office, Trump has made a pattern of cutting against the grain of his own aides and the U.S. intelligence community on the subject of Russia. In March, Trump ignored a specific warning from his national security advisors not to congratulate Putin on his reelection during a phone call. The Russian election took place in an environment of state-controlled news media and with Putin's most prominent opponent barred from the ballot.

On Sunday, he tweeted to congratulate Putin again, this time for hosting the World Cup soccer tournament.

And Trump's consistently strident stance toward NATO allies — he threatened to withdraw from NATO during last week's summit unless other member nations upped their defense spending, and labeled the European Union a trading “foe” in a weekend interview — stands to benefit Putin, who views a unified West as the main impediment to his expansionist aims.