Trump Re-Designates North Korea As A ‘State Sponsor’ Of Terrorism

President Donald Trump says he is putting North Korea back on the small list of official “state sponsors of terrorism,”... 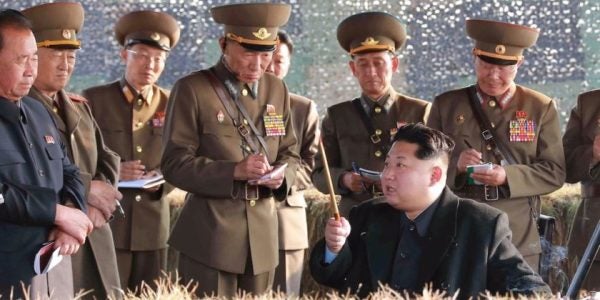 President Donald Trump says he is putting North Korea back on the small list of official “state sponsors of terrorism,” a move that could lead to additional sanctions against the nuclear-armed government.

Trump said the designation is part of a sanctions regime that would include “a very large” new sanction on Tuesday and increase in intensity over the next two weeks. By then, he said, sanctions would be at their highest level ever.

“It should have happened years ago,” Trump said at the start of a Cabinet meeting, calling North Korea “a murderous regime.”

Trump said that “in addition to threatening the world with nuclear devastation,” the North Korean government had sponsored terror on foreign soil.

“It must end its unlawful ballistic nuclear development,” he said.

U.S. officials cited the killing of North Korean leader Kim Jong Un’s estranged half brother in a Malaysian airport this year as an act of terrorism.

Most of the punishments that Washington could mete out under the state sponsor of terrorism legislation are already in place against North Korea, or are irrelevant since they would involve suspending aid programs that don’t exist.

North Korea joins only three other countries on the state-sponsor list: Iran, Sudan and Syria.

President George W. Bush removed North Korea from the list in 2008 in an unsuccessful bit to halt its nuclear weapons program, and President Barack Obama removed Cuba in 2015 when diplomatic relations were renewed.

Discussions to restore North Korea to the list began last year on Capitol Hill under the Obama administration.