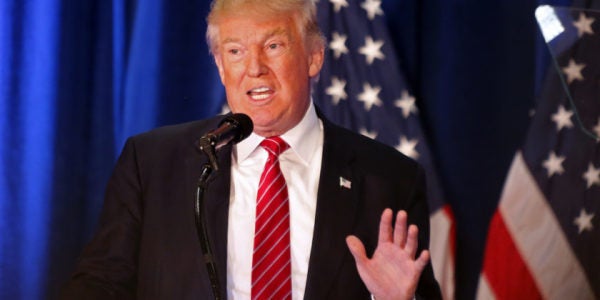 President Donald Trump on Thursday said military action against North Korea remains an option to counter its nuclear missile program, speaking ahead of a weekend when Pyongyang is expected to make another provocative move advancing its effort.

“Military action would certainly be an option,” Trump said at a White House news conference alongside the leader of Kuwait. “Is it inevitable? Nothing is inevitable. It would be great if something else could be worked out.”

He concluded, “North Korea is behaving badly, and it’s got to stop.”

Pressure has mounted on Trump to respond as North Korea appears to be getting closer to building a nuclear weapon small enough to be compatible with a missile that can reach the United States.

North Korea appeared to carry out its sixth and most powerful test explosion of a nuclear bomb on Sunday.

Saturday is the anniversary of North Korea’s founding, and its leaders typically celebrate with a show of force.

Trump didn’t answer a question about whether he would accept North Korea as a nuclear power and switch the U.S. strategy to one of containment and deterrence.

Decades of attempts by previous presidents to use sanctions and diplomacy to persuade North Korea to abandon its nuclear ambitions haven’t worked, Trump said.

“We’ve had presidents for 25 years now, they’ve been talking, talking, talking, and the day after an agreement is reached, new work begins in North Korea, continuation on nuclear,” he said. “So I would prefer not going the route of the military, but it’s something certainly that could happen.”