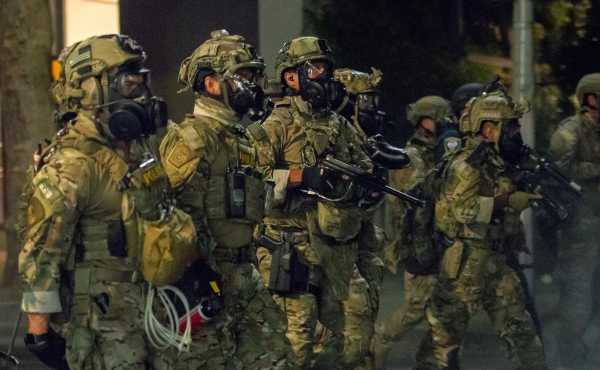 “In Portland they've done a fantastic job,” Trump said of the federal agents sent to the Oregon city.

Trump described the protesters as anarchists who “hate” the U.S. and signaling he might send federal troops to cities like Chicago, New York, Detroit, Baltimore, and Oakland.

Unidentified federal agents have reportedly been driving around downtown Portland in unmarked vans and detaining people without explanation.

Mark Pettibone, a 29-year-old demonstrator who was detained by federal agents in Portland last Wednesday, told the Washington Post he wasn't sure whether the men were police or far-right extremists when he saw them hop out of an unmarked van and walk toward him.

Pettibone said his first instinct was to run from the officers, who wore green military fatigues with “police” patches. He was never told why he was arrested, is not aware of any charges against him, and does not know who detained him.

“I was terrified,” Pettibone, who said he was exercising his right to free speech and not involved in violence or destruction on Wednesday, told the Post. “It seemed like it was out of a horror/sci-fi … It was like being preyed upon.”

Pettibone was detained, searched, and taken to a federal courthouse where he was placed in a holding cell and read his Miranda rights before being released.

The federal officers sent to Portland are with the U.S. Marshals Service and an elite U.S. Customs and Border Protection unit, and they've been deployed as part of Trump's defense of monuments and broader pushback on protesters.

The Trump administration is facing mounting criticism from Democratic lawmakers and local leaders in Portland over the tactics of federal officers in the city, which have drawn comparisons to authoritarian regimes. The federal agents have been widely described as “secret police,” as the officers have apparently operated without badges or other identifying information.

House Speaker Nancy Pelosi on Friday said Trump “and his stormtroopers must be stopped.”

“Unidentified stormtroopers. Unmarked cars. Kidnapping protesters and causing severe injuries in response to graffiti. These are not the actions of a democratic republic,” Pelosi said.

“The US government should not be using unidentified federal officers as a secret police force to terrorize US citizens & violate their constitutional rights,” Warren tweeted on Friday.

Authoritarian governments, not democratic republics, send unmarked authorities after protesters. These Trump/Barr tactics designed to eliminate any accountability are absolutely unacceptable in America, and must end. pic.twitter.com/PE4YfZ9Vqd

“The Trump administration needs to stop playing politics with people's lives,” Oregon Gov. Kate Brown, a Democrat, told NPR's Michel Martin. “We don't have a secret police in this country. This is not a dictatorship. And Trump needs to get his officers off the streets.”

Brown said the presence of the federal agents has only made the situation worse.

“It's simply like adding gasoline to a fire,” Brown said. “What's needed is de-escalation and dialogue. That's how we solve problems here in the state of Oregon.”

Both Brown and Portland Mayor Ted Wheeler, also a Democrat, want the federal agents out of the city.

“Keep your troops in your own buildings, or have them leave our city,” Wheeler said at a Friday press conference.

“This is part of the core media strategy out of Trump's White House: to use federal troops to bolster his sagging polling data,” Wheeler said. “And it is an absolute abuse of federal law enforcement officials.”

The Trump administration is being sued over Portland

The American Civil Liberties Union on Friday filed a lawsuit against the Department of Homeland Security and U.S. Marshals Service over the presence of federal agents in Portland.

“This is a fight to save our democracy,” Kelly Simon, interim legal director with the ACLU of Oregon, said in a statement. “Under the direction of the Trump administration, federal agents are terrorizing the community, risking lives, and brutally attacking protesters demonstrating against police brutality.”

Meanwhile, some in Washington have called for acting Homeland Security chief Chad Wolf to resign or be fired over the recent events in Portland.

“Ordering the occupation of U.S. cities, seeking the escalation of violence, and intentionally risking American lives over peaceful protests and graffiti is unfathomable and unacceptable. Secretary Wolf must resign immediately or be fired,” Democratic Rep. Don Beyer of Virginia said on Monday.

Ordering the occupation of US cities, seeking the escalation of violence, and intentionally risking American lives over peaceful protests and graffiti is unfathomable and unacceptable.

Acting Secretary Wolf must resign immediately or be fired. https://t.co/Feo54s6OBX

'Their presence here is actually leading to more violence'

Despite the criticism over recent developments in Portland, Homeland Security is prepping to deploy 150 federal agents to Chicago this week, the Chicago Tribune reported Monday. At the same time, Democratic lawmakers in Congress are reportedly crafting legislation to require law enforcement to display identification when on duty.

Customs and Border Protection has disputed that its agents have only operated as unidentified federal agents, the Post reported, also stating that the names of officers have not been displayed “due to recent doxing incidents against law enforcement personnel who serve and protect our country.”

In a tweet on Sunday, Trump defended the presence of federal agents in Portland.

“We are trying to help Portland, not hurt it. Their leadership has, for months, lost control of the anarchists and agitators. They are missing in action. We must protect Federal property, AND OUR PEOPLE. These were not merely protesters, these are the real deal!” Trump said.

But Portland's mayor fervently rejected Trump's depiction of events in his city, stating that the presence of federal officers is actually escalating the situation.

Portland Mayor Ted Wheeler on federal troops descending upon the unrest in his city: "Their presence here is actually leading to more violence and more vandalism. And it's not helping the situation at all. They're not wanted here" https://t.co/20VH2GZFlS #CNNSOTU pic.twitter.com/uTi9qC5mBY

“The tactics that the Trump administration are using on the streets of Portland are abhorrent,” Wheeler said on CNN's “State of the Union” on Sunday.

“People are being literally scooped off the street into unmarked vans, rental cars, apparently. They are being denied probable cause,” Wheeler said. “And they are denied due process. They don't even know who's pulling them into the vans. The people aren't identifying themselves. And, as far as I can see, this is completely unconstitutional.”

“Their presence here is actually leading to more violence and more vandalism,” Wheeler said of the federal agents in his city. “And it's not helping the situation at all. They're not wanted here. We haven't asked them here. In fact, we want them to leave.”