The White House, already embroiled in a self-inflicted crisis, lurched into a new one Monday as administration officials and members... 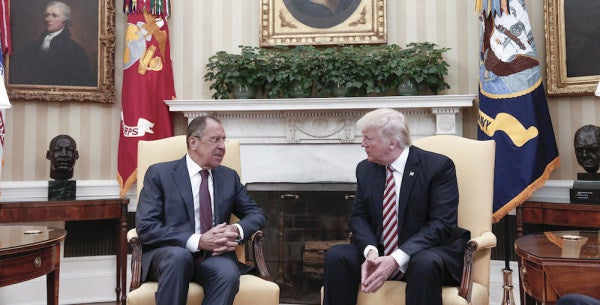 The White House, already embroiled in a self-inflicted crisis, lurched into a new one Monday as administration officials and members of Congress reacted to reports that President Donald Trump had shared highly classified intelligence with visiting Russian officials in the Oval Office.

Not even a week removed from the president’s stunning decision to fire FBI Director James B. Comey, which was followed by days of often conflicting White House explanations, administration officials sought to deny the story that was first reported by The Washington Post. The discussion between Trump and the Russians covered only a range of common threats and did not include operations not already publicly disclosed, White House officials said.

In a brief and hastily scheduled appearance before reporters outside the West Wing, National Security Adviser H.R. McMaster said that “at no time were intelligence sources or methods discussed” in the meeting. “I was in the room. It did not happen,” McMaster said before leaving without answering shouted questions.

That was, however, a denial of something that the Post article had not claimed. The article said Trump discussed information at one of the highest classification levels, about threats from Islamic State involving laptops taken aboard airliners, during his meeting with Russian Foreign Minister Sergei Lavrov and Ambassador Sergey Kislyak.

The information had come from a U.S. ally that had provided the intelligence on condition it not be shared, the Post said. That breach of the intelligence-sharing relationship could make Trump’s disclosure especially damaging, the newspaper reported.

Even as the White House disputed the reports, some Republican senators seemed to credit them, expressing dismay instead of coming to Trump’s defense.

“The White House has got to do something soon to bring itself under control and in order,” said Sen. Bob Corker of Tennessee, the Republican chairman of the Senate Foreign Relations Committee. “Obviously they’re in a downward spiral right now, and they’ve got to figure out a way to come to grips with all that’s happening.”

Although it is not illegal for a president to reveal classified information, administration officials were reportedly so concerned that Trump’s disclosure would antagonize the foreign ally that provided the intelligence that White House aides quickly notified the CIA and the National Security Agency.

McMaster did say the discussion with the Russians included “threats to civil aviation.”

Tillerson, like McMaster, said there was no discussion of “sources, methods or military operations.” The reports acknowledged as much but said the information Trump passed along to the Russians could allow them to deduce such sensitive matters.

Powell, who also participated in the meeting, flatly called the story “false.”

“The president only discussed the common threats that both countries faced,” she said.

The Russian officials visited the day after Trump fired Comey amid the ongoing U.S. investigation into the Trump campaign’s possible links to Russian interference in the 2016 presidential election.

A disclosure like that attributed to Trump would be illegal from anyone other than the president. But Sen. Richard Blumenthal, a Democrat from Connecticut, said, “No one is above the rule of law in this country.

“It is absolutely terrifying,” Blumenthal said. “It’s another example of the free press uncovering stuff that the American people should know that hopefully will cause an outcry and outrage that will have some cumulative effect in protecting our democracy.”

Other senators offered sharp reactions to the reports, calling the president’s action, if true, “terrifying,” “reckless” and “deeply disturbing.” The Post’s report came just as senators were arriving for an evening vote.

Sen. Richard J. Durbin, an Illinois Democrat, the assistant minority leader, said such disclosure “may not only jeopardize our troops and our people, but the security of those who risk their lives to tell us what is actually happening.”

Graham, reflecting the exasperation of many Republicans at being forced to respond to repeated Trump controversies, added, “I’m not going to speculate. I’m tired of speculating about Trump every five minutes.”

House Minority Leader Nancy Pelosi of California called for a full briefing for Congress on the extent of the potential damage done.

During his campaign, Trump seized on reports that Hillary Clinton had conducted State Department business on a personal email account to suggest she mishandled classified information and put the nation at risk. His attacks prompted supporters’ chants of “Lock her up!” at every rally, which he encouraged.

Trump, at one rally in Wisconsin, said Clinton’s actions were “worse than Watergate.” In another, he declared, “Hillary’s corrupt criminal scheme put the safety of every American family in danger.”

Reporters and Trump critics resurrected a Trump tweet in July in which he quoted Comey’s report on her emails: “Crooked Hillary Clinton and her team ‘were extremely careless in their handling of very sensitive, highly classified information.’ Not fit!”

“I don’t think it’s safe to have Hillary Clinton be briefed on national security because the word will get out,” Trump said during a rally the same month. Later he promised to appoint a special prosecutor to investigate Clinton — a vow he withdrew after his election.