Republican presidential nominee Donald J. Trump raised eyebrows among many veterans Monday morning during a campaign appearance with the Retired... 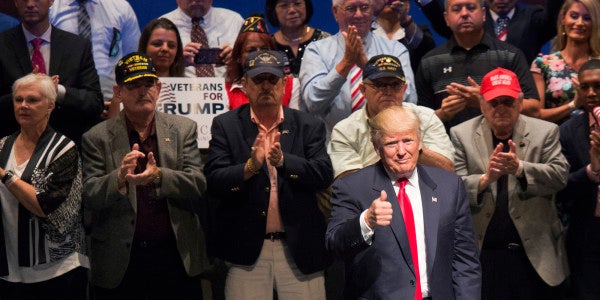 Trump was asked about treatment for post-traumatic stress disorder and military suicide. Here’s the quote that got him in trouble:

“When you talk about the mental health problems, when people come back from war and combat and they see things that maybe a lot of the folks in this room have seen many times over, and you’re strong and you can handle it, but a lot of people can’t handle it.”

The key issue here is that Trump associates not having PTSD with being “strong.”

Paul Rieckhoff, the executive director and founder of Iraq and Afghanistan Veterans of America, tweeted about how such language can “discourage people from getting help for mental health injuries.”

“Getting help is a sign of strength,” he wrote.

Last year, Task & Purpose called the perception that PTSD was a sign of mental weakness the number one myth surrounding the disorder. The piece was written by Pamela Holtz, a U.S. Army Reserve officer pursuing a doctorate in clinical psychology at the University of North Texas, who specializes in combat trauma, military sexual trauma, and stigma.

“Developing PTSD is not a sign of weakness, be it mental weakness or weakness of character,” Holtz wrote. “It is an understandable human response to uncommon experiences.”

In response to the criticism surrounding his remarks, the Trump campaign released a statement through a surrogate, retired Army Lt. Gen. Michael Flynn.

“The media continues to operate as the propaganda arm of Hillary Clinton as they took Mr. Trump’s words out of context in order to deceive voters and veterans—an appalling act that shows they are willing to go to any length to carry water for their candidate of choice,” Flynn said, as quoted by Politico. “Mr. Trump was highlighting the challenges veterans face when returning home after serving their country. He has always respected the service and sacrifice of our military men and women—proposing reforms to Veteran Affairs to adequately address the various issues veterans face when they return home.”

Trump himself never served in the military, receiving four draft deferments for college during the Vietnam War, and one for heel spurs in his feet, a condition that never appeared to plague him before and has not appeared in medical records since.

In a 1997 interview with radio host Howard Stern, Trump referred to his ability to not contract sexually transmitted infections in his dating life to service in Vietnam.

“I’ve been so lucky in terms of that whole world. It is a dangerous world out there — it’s scary, like Vietnam. Sort of like the Vietnam era,” Trump said. “It is my personal Vietnam. I feel like a great and very brave soldier.”