Here’s What Trump’s Space Force Will Actually Do, According To The Head Of NASA

NASA’s administrator is a strong defender of President Donald Trump’s proposals for space — including an armed force and a... 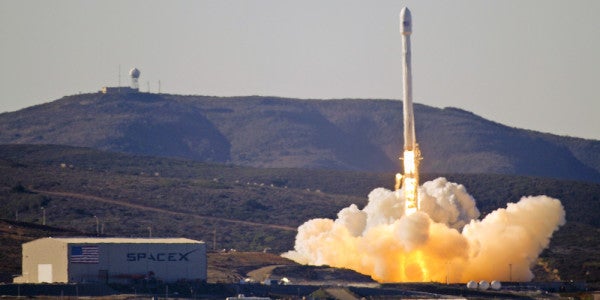 NASA’s administrator is a strong defender of President Donald Trump’s proposals for space — including an armed force and a permanent presence on the moon — and says he wants Americans to realize how much their well-being depends on what happens far above Earth.

“Every banking transaction requires a GPS signal for timing,” Jim Bridenstine said in an interview. “You lose the GPS signal and guess what you lose? You lose banking.”

“If you look at what space is, it’s not that much different than the ocean,” added Bridenstine, who made 333 aircraft-carrier landings as a Navy pilot. “It’s an international domain that has commerce that needs to be protected.”

Bridenstine was in his third term representing a congressional district in Oklahoma when Trump nominated him to lead the $21 billion space agency. He was confirmed in the spring despite criticism over his lack of scientific or engineering experience and his previous statements questioning climate change science — though he said in hearings that human activity was the chief cause of global warming.

Last summer, when he was still in Congress, Bridenstine supported a measure that would have created a “space corps.” It passed the House but was removed from the final defense spending bill. Then last month, Trump called for the Pentagon to develop a sixth branch of the American armed services that would protect national and commercial interests in space.

Trump’s surprise announcement caught Pentagon officials and members of Congress off guard. The Defense Department already has several major programs in the works and the Air Force has contended that a new branch was not necessary for space defense. Sen. Bill Nelson, a Florida Democrat who once took part in a space shuttle mission, tweeted: “generals tell me they don’t want” it and “now is NOT the time to rip the Air Force apart.”

How to establish U.S. security in space has been debated for at least two decades. An independent commission — led by Donald Rumsfeld before he became defense secretary — reported in 2001 that “in the longer term it may be met by a military department for space.”

Some 60 different agencies within the defense establishment play roles in space-related work, said Todd Harrison, director of the Aerospace Security Project at the Center for Strategic and International Studies. That may slow the realization of Trump’s goal. “This isn’t going to happen quickly,” Harrison said.

Laura Grego, a senior scientist at the Union of Concerned Scientists who works on space security, said that the idea of a space force means different things to different people — headache-inducing bureaucratic reorganization to some, federal and commercial asset protection to others, and militarization of space for still others. Congress asked the Pentagon to conduct a study on the issue, which is expected to be completed next month.

“It does seem premature to have a solution before you’ve seen the study that you’ve asked for,” she said.

The Pentagon is responding to Trump’s directive. “Our policy board will begin working on this issue, which has implications for intelligence operations for the Air Force, Army, Marines, and Navy,” said Army Lt. Col. Jamie Davis, a Defense Department spokesman. “Working with Congress, this will be a deliberate process with a great deal of input from multiple stakeholders.”

Bridenstine said the creation of a space force wouldn’t interfere with programs or funding at his agency.

Trump’s ambition to modernize the way the federal government regulates commercial use of space has drawn normally far-flung agencies into one conversation. NASA, the departments of Commerce, Defense, Transportation and other agencies are all realigning their space-related activities, directed by three White House Space Policy Directives issued since December.

With private companies confidently pursuing many ventures involving space commerce and travel, NASA has been casting its eyes toward the moon, Mars and beyond.

Trump “wants our return to the moon to be sustainable,” Bridenstine said. “We are not going to leave the moon as we did in 1972,” the date of the last U.S. landing there.

Bridenstine is also looking beyond the International Space Station, which the U.S. plans to turn over to the private sector in the next decade, to the construction of permanent infrastructure above and around the moon.

Permanent infrastructure for the moon cannot be realized without international partners, he said, pointing out the two-decade U.S.-Russian collaboration on the space station. That partnership has weathered tumultuous periods in the two countries’ relations, including the tense period of sanctions that began after Moscow’s annexation of Crimea.

“China is a bit of a different story,” Bridenstine said. “It’s possible that maybe one day they could be involved, but I don’t think right now people are comfortable with that” because of issues that include intellectual property disputes and human rights.

Since 2011, Congress has prohibited NASA employees from collaborating with Chinese counterparts.

As for any future space force, Bridenstine argued that its personnel should have ranks akin to the Navy’s, as in, say, Captains Kirk and Picard of “Star Trek.”

“If you look at the science fiction movies, all of the space military folks, they’re all admirals, which is, of course, a Navy rank,” Bridenstine said.