Trump Finds Himself Trapped Again By A War He Campaigned Against

President Donald Trump surprised his top aides last week when he said he wanted U.S. troops out of Syria “very... 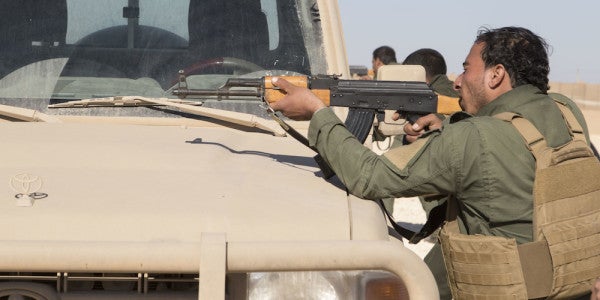 President Donald Trump surprised his top aides last week when he said he wanted U.S. troops out of Syria “very soon.” His subsequent silence — and pushback from key advisers — suggests he won’t get that wish. And it won’t be the first time.

Like his predecessor, Barack Obama, Trump is struggling to square his desires to quickly get out of foreign entanglements with the reality on the battlefield. Even if there’s little chance of a traditional “victory” in places like Syria and Afghanistan, Trump is realizing that a withdrawal could undermine other objectives — like the defeat of the Islamic State or the containment of Iran.

“The tough reality is that military wins on the ground only take us so far,” said Mona Yacoubian, senior adviser for Syria, Middle East and North Africa at the United States Institute of Peace. “In order to consolidate and sustain those wins, it is essential to engage in the far more difficult and complex task of stabilizing these liberated areas. Otherwise, we may find ourselves back once again fighting the same fight.”

Stabilization and reconstruction, though, aren’t on Trump’s agenda in Syria. That will be more of a job for “countries in the region and beyond, plus the United Nations,” according to a Wednesday statement from the White House.

Officials within the National Security Council, the Defense Department and the State Department were caught off-guard by Trump’s comments at a rally in Ohio last week, and again at a press conference on Tuesday, in which he predicted an American departure from Syria “very soon.”

He told the crowd in Ohio that “We are going to get back to our country, where we belong, where we want to be.”

While the comments aligned with remarks Trump made as a private citizen and presidential candidate, they appeared to go against much of what the administration had previously said on Syria. Speaking at Stanford University earlier this year, Secretary of State Rex Tillerson — whom Trump fired last month — said the U.S. needed to “continue our commitment to the complete defeat of ISIS” and keep up stabilization efforts, including defusing unexploded ordnance and restoring electricity.

After Trump spoke, the White House issued a statement saying the mission to wipe out the Islamic State in Syria was “coming to a rapid end” but offered no timetable for withdrawal. Trump had criticized Obama for setting deadlines for troop withdrawals from Iraq, saying it allowed enemies to hunker down and wait America out.

“The president has been very good in not giving us a timeline,” Lieutenant General Kenneth McKenzie told reporters at the Pentagon on Thursday. “We’ve always thought that as we reach finality against ISIS in Syria, we’re going to adjust the level of our presence there. So in that sense, nothing actually has changed.”

Trump’s aides — including Chief of Staff John Kelly — have managed to persuade him that there is more work to be done, even if the Islamic State has been ousted from nearly all the territory it once held, according to people familiar with the discussions. The problem, according to a State Department official who asked not to be identified discussing internal deliberations, is that the extremist group is entrenched in the remaining territory it holds in Syria.

The expectation that the U.S. won’t be leaving Syria soon, despite what Trump says publicly, played out in a similar fashion as the debate last year over strategy in Afghanistan. For years, Trump had argued that the U.S. should withdraw its forces, saying the conflict — the longest in American history — was wasting billions of dollars. He moderated his position somewhat as a presidential candidate, saying the U.S. would “probably” have to stay for some time.

Yet last August, Trump agreed to a Pentagon request to send thousands of additional troops, including special forces, to Afghanistan. He also gave commanders in the field more authority to strike the Taliban as well as the Islamic State and al-Qaeda terrorists.

That was in part a response to the fact that the security situation has continued to deteriorate. Trump himself acknowledged his change of heart in an Aug. 21 speech on “the path forward in Afghanistan,” saying his “original instinct was to pull out.” But he had come to realize that “the consequences of a rapid exit are both predictable and unacceptable.”

Syria presents its own welter of complexities. In December, a Pentagon spokesman said the U.S. had about 2,000 troops in Syria. One of them, Master Sergeant Jonathan Dunbar, died from wounds sustained in an explosion in the country late last month.

Along with the battle against the Islamic State, the U.S. is locked in a struggle for influence in the region with Iran and Russia, which have openly backed the government of Syrian President Bashar al-Assad. Vacating the battlefield could provide an opening for Moscow and Tehran and embolden the Islamic State. While Trump has been reluctant to publicly criticize Russia, he has been direct in his criticism of Iran’s push for greater influence in the region.

Another concern is that coalition operations against the Islamic State have paused. That’s because the Kurdish allies the Americans rely on have been focused instead on battling the Turkish military. That has strained ties between the U.S. and Turkey, long-time NATO allies.

“I do believe the conflict in Syria is at a critical inflection point and perhaps has entered the most dangerous phase since the conflict started seven years ago,” Yacoubian said. “The conflict is now being propelled by global and regional stakeholders.”