Trump Talks Tough. But After 15 Months, He’s Actually Been Risk Averse When It Comes To Military Force

He tweets about “fire and fury” and threatens “an event the likes of which nobody's seen before.” But after 15... 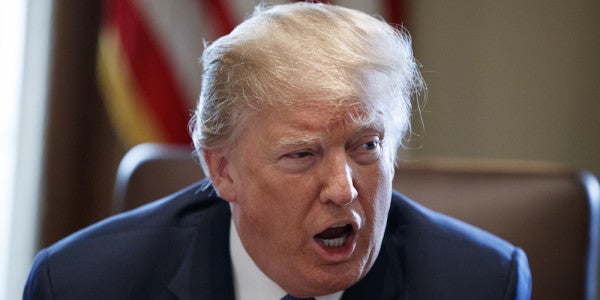 He tweets about “fire and fury” and threatens “an event the likes of which nobody's seen before.”

But after 15 months in the White House, Donald Trump has shown that his use of military force may be the most conventional aspect of his presidency.

To date, Trump has launched two limited military strikes against Syria and increased the use of airstrikes and special operations raids in Somalia and Yemen to kill Islamic extremists, killing more civilians as well. He has equivocated over pulling troops from Syria amid its civil war and reversed President Obama's drawdown of American forces from Afghanistan.

It adds up to a shift from Obama's military strategy, but more incrementally than by the 180 degrees that Trump's incendiary rhetoric has suggested since his days on the campaign trail.

“The president is erratic, but he does also seem to be pretty risk-averse where the use of military force is concerned,” said Kori Schake, who held several security roles in George W. Bush's administration and wrote a book with Trump's secretary of Defense, James N. Mattis.

“He asks basic and important questions, often asks for military planning for operations that alarm the professionals, but so far hasn't chosen to enact them,” Schake said, adding, “He doesn't appear to want to spend his presidency on the wars.”

Trump stands at a key juncture in defining his national security policy. John Bolton, his third national security advisor in little more than a year, began his job this month, with a history of advocating aggressive use of force and a reputation from his Bush-era service as a bruising infighter to get his way within the federal bureaucracy.

One White House National Security Council official, speaking on condition of anonymity, said that the stamp the more interventionist Bolton will put on Trump's military policy is still a “wait and see” proposition.

Administration officials would not grant interviews with security staffers amid Bolton's transition and the ongoing shakeup in the National Security Council. Several top aides have resigned or been ousted as Bolton forms his own team.

In the same week that Bolton arrived in the West Wing, Trump ordered the latest airstrikes against Syria — a dramatic act, but one that was sharply dialed back by military advisors to minimize tensions with the Russians, who are backing Syrian strongman Bashar Assad.

Meanwhile, after months of bellicose warnings that he might use force to halt North Korea's nuclear program, Trump is seeking to win his biggest bet yet, on a summit with the isolated country's autocratic leader, Kim Jong Un.

Security experts from across the spectrum — many of whom opposed Trump's election — still hold significant concerns about his temperament, his willingness to risk a fatal miscommunication with global rivals and his impatience with detailed policy analyses. Some, particularly on the left, worry that Bolton will push him toward perilous military interventions.

Yet, so far, the biggest surprise has been the gulf between Trump's talk and his military actions.

“A lot of this, Hillary Clinton would have done,” said Derek Chollet, an assistant secretary of Defense for international security affairs under Obama and an advisor to Clinton when she was secretary of State.

In some ways, Trump is discovering what Obama and other predecessors learned about the limits both of presidential power in the face of global conflicts and of the options from military advisors to confront them.

He initially hoped to withdraw from Afghanistan but was persuaded by advisors to raise troop levels instead. Syria may follow a similar course.

Trump recently called for an abrupt withdrawal of the roughly 2,000 U.S. troops from Syria, yet the following week felt compelled to retaliate against Assad's use of chemical weapons. That episode only reinforced the arguments of Trump's national security advisors that he shouldn't leave Syria to Russia and Iran, Assad's protectors. Lately, Trump has taken to describing his goal of bringing troops home as vaguely aspirational.

From the start Trump's vision has been blurred by seemingly contradictory impulses. While he promotes a nationalist, noninterventionist agenda, the president exudes hawkish bravado, boasting about the size and strength of the military, often surrounding himself with soldiers and military equipment.

During the campaign, he vowed to enlarge the military for the sake of deterrence, to avoid unnecessary wars or nation-building adventures. Yet he also promised to “bomb the hell out of ISIS,” an acronym for the Islamic State. And as president, he has threatened “fire and fury like the world has never seen” against North Korea.

Supporters say Trump's doctrine is modeled after President Reagan's “peace through strength” dogma. “Extravagance is his personality” but it also serves a purpose in projecting strength, said Matt Schlapp, chairman of the American Conservative Union.

Trump made a similar point during an interview on “Fox & Friends” on Thursday, recounting his threatening tweets toward Kim months ago, which have given way to a softer tone as Kim has moved toward diplomacy. He even called the autocrat “very honorable.”

“It was very, very nasty with 'Little Rocket Man' and with the buttons — 'my button's bigger,'” he said, adding about himself, “Everyone says, 'This guy is going to get us into nuclear war.' Let me tell you: Nuclear war would happen if you had weak people.”

Many security analysts outside Trump's circle are unwilling to ascribe any doctrine to his record, calling it more a loose collection of gut instincts, machismo and military deference than coherent strategy.

“President Trump is a lot about looking tough, being dramatic and not being his predecessor,” said Michael V. Hayden, a retired general and former CIA director who served in both Democratic and Republican administrations.

Yet, Hayden continued, “What President Trump did in Syria was simply what President Obama was doing. He just amped it up a little bit. There weren't any sharp turns there.”

Hayden defined Bush by his willingness to commit large numbers of troops to two wars for long periods. Though Obama campaigned against those policies, Hayden noted, he nonetheless left many deployed, if at a lower profile, for extended periods.

Trump, in contrast to both of them, seems “comfortable with high levels of violence but only for short periods of time,” said Hayden, whose book “The Assault on Intelligence: American National Security in an Age of Lies” is about to be published.

Trump shares Obama's inclination to withdraw from conflicts in the Middle East, but also finds himself boxed in by military advisors who warn that withdrawals could heighten instability, empower terrorist groups or otherwise weaken American interests.

The April 14 missile strikes in Syria were intended to send a message that Trump, in contrast to Obama, was willing to employ force against the use of chemical weapons. Yet they were limited, like the previous one in April 2017. Although Trump declared “Mission Accomplished!” the next day, the strikes may not prevent future chemical attacks and didn't stop Assad's forces from continuing to kill civilians.

Trump allies say the president is not given enough credit for thinking through military strategy. Jim Hanson, who is president of the conservative think tank Security Studies Group and in frequent contact with administration officials, disputed portrayals of Trump as “a shoot from the hip, make snap judgments” sort of commander in chief.

Hanson said Trump asks basic questions about the implications of security decisions, with an emphasis on U.S. interests.

Other advisors, however, have said that the president continues to resist lengthy policy discussions.

Much of Trump's policy is defined not by those private discussions but by his public pronouncements, especially on Twitter, that often take even advisors by surprise. Supporters say Trump, by those outbursts, intends to provoke reactions or air frustrations more than to convey specific policy.

On that, Trump's critics agree. And they continue to worry that he will unintentionally spark a conflict. Kathleen Hicks, who served in top defense positions under Obama, worries that an adversary will react or that Trump might overestimate his ability to contain the use of force.

Even if Trump has been inclined to avoid risk in deploying force, his Twitter finger is another story, Hicks said.

“It's clear his tendency is toward willingness to risk a little miscalculation in order to talk tough,” she said. “It really is, 'Speak loudly and carry a big stick.'”