Even as the U.S. military takes on a greater role in the warfare in Iraq and Syria, the Trump administration... 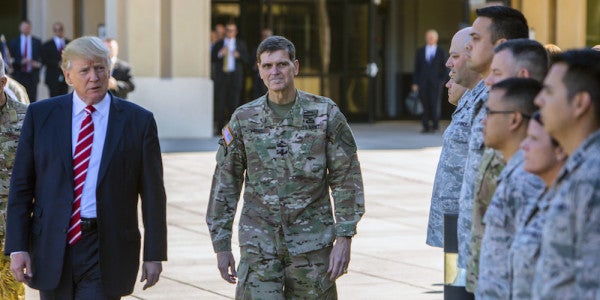 Even as the U.S. military takes on a greater role in the warfare in Iraq and Syria, the Trump administration has stopped disclosing significant information about the size and nature of the U.S. commitment, including the number of U.S. troops deployed in either country.

Earlier this month, the Pentagon quietly dispatched 400 Marines to northern Syria to operate artillery in support of Syrian militias that are cooperating in the fight against Islamic State, according to U.S. officials. That was the first use of U.S. Marines in that country since its long civil war began.

In Iraq, nearly 300 Army paratroopers were deployed recently to help the Iraqi military in their six-month assault on the city of Mosul, according to U.S. officials.

Neither of those deployments was announced once they had been made, a departure from the practice of the Obama administration, which announced nearly all conventional force deployments.

The decision appears to be making good on Trump's promise as a candidate to insist on more of an “element of surprise” in battle tactics.

“In order to maintain tactical surprise, ensure operational security and force protection, the coalition will not routinely announce or confirm information about the capabilities, force numbers, locations, or movement of forces in or out of Iraq and Syria,” said Eric Pahon, a Pentagon spokesman.

That move deprives the public of information it has a right to know about the wars in which the U.S. is engaging, said Ned Price, National Security Council spokesman under former President Barack Obama.

“The position of the Obama administration was that the American people had a right to know if servicemen and women were in harm's way,” he said.

“It's truly shocking that the current administration furtively deploys troops without public debate or describing their larger strategy.”

In addition to the number of troops being larger, American forces are now nearer to the front lines in both Iraq and Syria than they have been since the war against Islamic State began nearly three years ago.

The deployment of Marines to Syria was confirmed for the first time publicly this week by Gen. Joseph Votel, the top commander in the Middle East, in response to a question at a congressional hearing from a member of the House Armed Services committee who asked whether there were additional Americans inside the country.

“They have deployed,” Votel said, adding that there were likely more troops headed for deployment.

Under the Obama administration, Pentagon policy was to announce conventional deployments after they occurred. That administration even took the unusual step of revealing in 2015 that 200 special operations forces _ whose missions often are classified _ had been sent to Syria.

“The coalition commander's intent is that ISIS be first to know about any additional capabilities the coalition or our partner forces may present them on the battlefield,” Pahon said, using an acronym for Islamic State.

Even when news of a deployment leaks, officials will confirm only the broad description of the unit size being deployed _ such as a brigade, which can be between 3,200 and 4,000 troops.

The military does reveal what's been dubbed a “force management level” _ the number of full-time troops deployed, which is currently about 5,200 in Iraq and 500 in Syria. Pentagon officials acknowledge, however, that the number significantly understates the size of the U.S. troop presence because it does not include troops that are deployed on what the military considers a “temporary basis.”

More than 1,000 troops are currently in the two countries in that status, which applies to troops deployed for less than about six months and security personnel. The count also excludes civilian contractors, several thousand of whom are in Iraq and Syria.

The Obama administration created and used the force management level in a way that undercounted U.S. forces, although it did announce most deployments.

There were exceptions. Staff Sgt. Louis F. Cardin, 27, of Temecula, Calif., died on March 19, 2016, after coming under Islamic State rocket fire in northern Iraq. At the time of Cardin's death, the U.S. military had not disclosed the presence of American troops in the region, raising questions about the Obama administration's transparency.

Michael E. O'Hanlon, a military analyst at the nonpartisan Brookings Institution in Washington, said limiting announcements of incremental deployments could be justified to avoid giving information to hostile forces.

“Broad contours of an operation should be debated openly, and publicly understood, but specific raids or other modest changes in capabilities and deployments should not be telegraphed in advance,” he said.

But officials of previous administrations said that approach limits debate over military policy.

“Syria is a complicated environment, so if you're sending Americans in harm's way over there, people need to know what the overarching goal is,” said Lawrence Korb, a former assistant secretary of defense under President Ronald Reagan and current fellow at the Center for American Progress Action Fund.

“It's important to have a public debate,” he said. “Congress must have a role in deciding what happens next, otherwise this is a slippery slope.”

Congress has not debated the additional deployments, and the Trump administration has yet to explain what its longer-term policy is for Iraq or Syria.

In the absence of a specific authorization for use of troops in those two countries, the Pentagon for years has been relying on legal authority granted by Congress in 2001 to combat al-Qaida and its affiliates. That authorization predated the existence of the Islamic State by more than a decade.

“I think it would be a statement of the American people's resolve if you did so,” he said.

Some members of Congress have raised concerns about the deployments.

Rep. Niki Tsongas, D-Mass., told Votel she was concerned that additional deployments may lead to an “expansive, open-ended commitment” in Syria.

Sen. Bob Corker, R-Tenn., chairman of the Foreign Relations Committee, said Thursday that a new use of force authorization could be up for debate once the White House settles on its strategy for combating Islamic State.

“They're developing an ISIS strategy. They sent one to the president a month ago; he hasn't accepted it. When they finish that, we plan to have hearings on all of these issues,” Corker said. “My guess is after that, we may in fact try and do an AUMF,” he said, referring to an authorization for use of military force.

Sen. Thom Tillis, R-N.C., a member of the Armed Services Committee, said the appetite in Congress has grown for taking a fresh look at the issue.

“The world's changed a bit,” Tillis said. “The nature of the threat's changed too.”

That would be an important step, said Sen. Tom Udall, D-N.M.

“I do not think it is right for the U.S. military to become involved in the Syrian civil war based on the 9/11 AUMF,” he said. “I voted for that AUMF as a House member. I never imagined that vote being used to justify U.S. ground troops in Syria in the year 2017. And I don't think anyone else who voted in favor of it did either.”