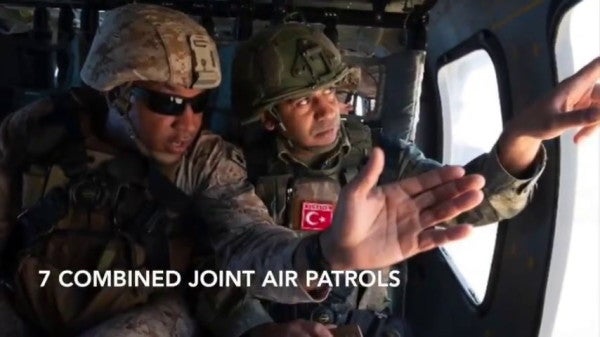 Turkey launched a military assault against U.S.-allied Kurdish forces in Syria on Wednesday after President Trump cleared the way by pulling American troops out of the region — a move that prompted bipartisan outrage on Capitol Hill.

But, as Turkish ground troops began invading the Kurdish-controlled territories Wednesday afternoon after a volley of airstrikes, Trump sent mixed signals and threatened to impose “far more than sanctions” on Turkey if it doesn't handle the volatile situation in a “humane way.”

The president did not explain what “far more than sanctions” meant or what a “humane” Turkish invasion of Syria would look like. “We're going to have to define that as we go along,” he said.

President Donald Trump answers questions from reporters during an event on “transparency in Federal guidance and enforcement” in the Roosevelt Room of the White House, Wednesday, Oct. 9, 2019, in Washington.(Associated Press/Evan Vucci)

Erdogan wants to claim northern parts of Syria to create a “safe zone” where he can host millions of Syrian refugees who fled into Turkey after civil war broke out in the war-torn country eight years ago.

The authoritarian Turkish leader considers the U.S.-allied Kurds currently controlling that region to be terrorists and have made clear he aims to target them in his military campaign.

While Trump played loose on the details, some of his most steadfast allies in Congress broke their rigid loyalty and pledged to punish Turkey for its attack on the Kurds, longtime U.S. allies that have been credited with rooting out ISIS from Syria.

“America is better than this. Please stand up to Turkey, Mr. President,” Sen. Lindsey Graham (R-S.C.) tweeted at Trump after announcing a package of “severe” punitive sanctions on Turkey co-introduced with Sen. Chris Van Hollen (D-Md.).

Graham, typically one of Trump's most prominent congressional boosters, added, “While the administration refuses to act against Turkey, I expect strong bipartisan support.”

As political tensions brewed in the U.S. capital, bloodshed began in Syria.

At least seven civilians and one member of the U.S.-backed Kurdish-led Syrian Democratic Forces had been killed in Turkish airstrikes as of late Wednesday, according to monitoring groups. Thousands of civilians, meanwhile, were fleeing the area on foot as Turkish forces approached.

It's unknown if the chaos would prompt Trump to retaliate against Erdogan. The White House did not respond to a call seeking comment.

Trump ordered the withdrawal of U.S. forces from northern Syria on Sunday after a phone call with Erdogan. The American troops had served as a safeguard against Turkish aggression and as protection for the Kurdish forces in the area.

Trump says he campaigned on ending U.S. military involvement overseas and that this week's abrupt troop withdrawal comports with that message. “We're getting out of the endless wars, have to do it,” Trump said at the White House.

But military and national security experts on both sides of the aisle say the troop draw-down could cause a reemergence of ISIS, as Kurds may have to start fighting Turkey in the north instead of guarding areas that were previously controlled by the Islamic extremists.

“There is still time to reverse this decision and avoid this foreign policy blunder,” Rep. Dan Crenshaw (R-Texas), a former Navy SEAL and veteran of the war in Afghanistan, tweeted at Trump.