Just hours after his former secretary of defense sharply criticized him in a rare statement, President Donald Trump called out Jim Mattis on Twitter, writing that he is "glad he is gone." 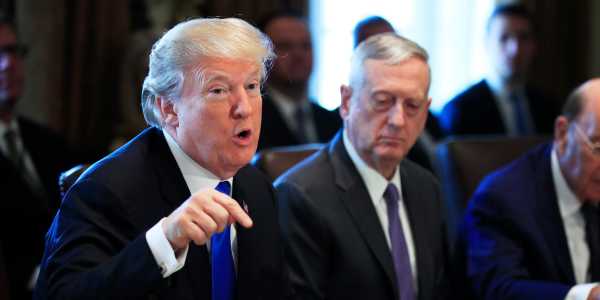 Just hours after his former secretary of defense sharply criticized him in a rare statement, President Donald Trump called out Jim Mattis on Twitter, writing that he is “glad he is gone.”

The president said that “probably the only thing Barack Obama & I have in common is that we both had the honor of firing Jim Mattis, the world's most overrated General.” He claimed that he asked Mattis for his letter of resignation and “felt great about it.”

…His primary strength was not military, but rather personal public relations. I gave him a new life, things to do, and battles to win, but he seldom “brought home the bacon”. I didn’t like his “leadership” style or much else about him, and many others agree. Glad he is gone!

Trump said that he is “glad he is gone.”

His press secretary said that Mattis' statement criticizing the president was “little more than a self-promotional stunt to appease the DC elite,” adding that the legendary former Marine Corps general's “words pale in comparison to @POTUS' strong action” to restore order.

Former Secretary Mattis’ “article” is little more than a self-promotional stunt to appease the DC elite.

President @realDonaldTrump is the law and order President that has restored peace to our nation’s streets.

The president's remarks about Mattis follow the publication of a statement that accused Trump of tearing America apart amid nationwide unrest following the death of George Floyd.

“Donald Trump is the first president in my lifetime who does not try to unite the American people — does not even pretend to try. Instead, he tries to divide us,” Mattis wrote in a statement first published by The Atlantic.

Explaining that Americans must unite in spite of the president, Mattis wrote that “we must reject and hold accountable those in office who would make a mockery of our Constitution.”

Mattis resigned from his position as secretary of defense in December 2018, writing to the president that he should select a secretary of defense “whose views are better aligned with yours” on issues like respecting U.S. allies, confronting US adversaries, and protecting the international order.

While Mattis' frustration with the president during his time as secretary of defense had been well reported, but the final straw is said to have been Trump's decision to prematurely pull troops out of Syria and abandon US partners.

His resignation letter was widely perceived as a scathing rebuke of Trump's policies. While Mattis had intended to officially step down a little later, Trump pushed him out early.

He claimed in early January of last year that he “essentially” fired Mattis.

When Mattis first resigned, Trump spoke positively of Mattis, praising his service, but his rhetoric shifted quickly. The president has repeatedly claimed to have fired Mattis, although the details of his former secretary of defense's departure have differed slightly with each retelling.

Since leaving the Trump administration, Mattis had largely kept his thoughts about the president to himself, saying he owes the president silence.

“If you leave an administration, you owe some silence,” he explained to The Atlantic last summer. “There is a period in which I owe my silence. It's not eternal. It's not going to be forever.”

Recent events finally led him to speak out Wednesday.