President Donald Trump on Aug. 12 signed a $3.9 billion funding deal for the Department of Veterans Affairs that will... 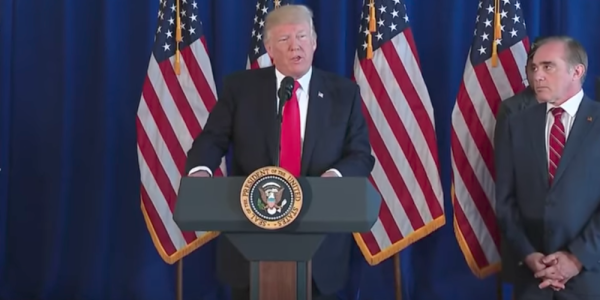 President Donald Trump on Aug. 12 signed a $3.9 billion funding deal for the Department of Veterans Affairs that will shore up the nearly bankrupt Veterans Choice Program and allow the VA to open 28 new clinics and implement new hiring programs.

Trump signed the bill in Bedminster, New Jersey, where he’s staying at his golf club on what he’s called a 17-day “working vacation.” The bill — a compromise created and supported by Democrats and Republicans — will provide $2.1 billion to the Choice program, which allows veterans to seek care outside of the VA. It will also invest $1.8 billion into hiring health care providers and leasing new clinics.

Without congressional action, the Choice program was expected to be depleted of money by mid-August, which VA leaders said would’ve led to layoffs and interrupted medical care for thousands of veterans.

“This bill will ensure veterans will continue to have the ability to see the doctor of their choice. So important,” Trump said. “Our great veterans deserve only the best and that’s what they’re getting.”

Just before Trump arrived for the signing, Charlottesville Mayor Mike Signer tweeted that one person had been killed.

Trump focused the start of his speech Aug. 12 on the violence.

But Trump turned his attention to the VA during his speech at Bedminster, where VA Secretary David Shulkin and leaders of veterans service organizations joined the president for the bill signing.

Shulkin first warned lawmakers about the unexpected funding shortage in the Choice program in June. He attributed the shortfall to the program’s increased popularity. On Saturday, he said the VA has authorized 15 million appointments through its community care programs since the start of the year. The $2.1 billion is expected to keep it going for the next six months.

During that time, Congress, the VA and veterans service organizations are planning to work on a broad reform of how veterans receive care in the private sector.

“This is really a temporary fix,” Shulkin said. “We have more work to do with Congress. We have to collapse eight different ways of paying for community care into a single program, and simplify it.”

But the bill signals a challenge for Shulkin in gaining support for his ideas to change community care programs. An original version of the bill that provided only funding for Choice — without the $1.8 billion for hiring and clinics — was shot down by the House after veterans organizations said it prioritized private-sector care while neglecting VA services.

The version that Trump signed Saturday also invests in VA clinics and personnel and passed unanimously in the House and Senate. Lawmakers in both chambers praised it as an example of what can be done when both parties come together.

The eight organizations that spoke against the initial bill said it was an indicator of VA care sliding too far into the private sector. In a statement, they said the final bill “avoided an unnecessary crisis” and “made critically important investments in VA health care.”

But the conservative group Concerned Veterans for America, which has advocated for a government-chartered nonprofit to run VA medical programs, criticized the groups and how the process was handled in Congress.

“This legislative process was classic DC swamp behavior, and now this bill is $1.8 billion more expensive than it needed to be,” CVA Policy Director Dan Caldwell said in a statement. “What we saw was a preview of how proponents of restricting veterans’ health care choice will behave in upcoming months as Congress works on broader reform.”

CVA launched a campaign last week against Rep. Tim Walz, D-Minn., who spoke against the original bill on the House floor. The group claims Walz “stood between veterans and their health care.”

Walz was part of the bipartisan group of lawmakers who came together after the original bill failed and created the deal that Trump signed Saturday.

Shulkin made a point to say Saturday the bill was bipartisan. After Trump praised Republican lawmakers Rep. Phil Roe of Tennessee, Sen. Johnny Isakson of Georgia and Sen. Dean Heller of Nevada during his speech, he beckoned Shulkin to the microphone, who thanked Walz and another Democrat, Sen. Jon Tester of Montana.

“It was very, very tough for reasons that I guess I understand, but it was not easy,” Trump said. “I will tell you Phil, Johnny and Dean worked very hard to get it through. Also, by the way, I can also say others, and even some Democrats.”

After Shulkin said Walz and Tester were key in passing the legislation, Trump said: “See, I can do it.”

With the signing, the VA can now implement a series of provisions to improve hiring for some of the agency’s approximately 49,000 vacancies.

The VA is also now authorized to open two new clinics in Gainesville, Fla., in addition to new clinics in Pike County, Ga.; Pittsburgh; Birmingham, Ala., and Santa Rosa and Oxnard, Calif.

New research space will be opened in Boston and a replacement business office opened in Denver.

Two other VA-related bills are awaiting Trump’s signature. On Friday, the House sent Trump a bill to reform the process veterans use to appeal denials of their claims for benefits. The bill aims to shorten the amount of time veterans wait for decisions, which now averages six years.