President Donald Trump on Wednesday vetoed a resolution that sought to prevent him from taking military action against Iran without congressional approval. 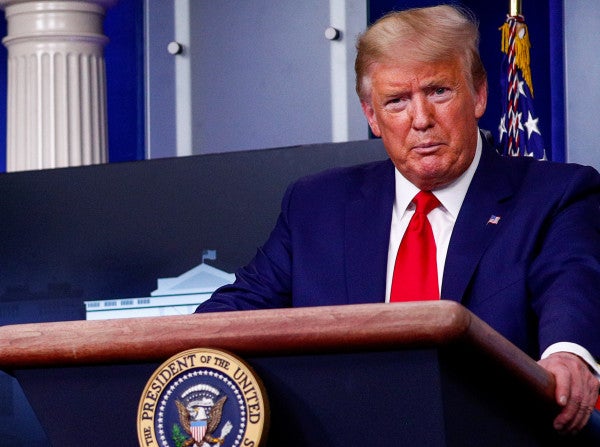 President Donald Trump on Wednesday vetoed a resolution that sought to prevent him from taking military action against Iran without congressional approval.

The measure, sponsored by Democratic Sen. Tim Kaine of Virginia, was introduced after Trump ordered the controversial, lethal drone strike on Iranian Maj. Gen. Qasem Soleimani in January. It passed with bipartisan support in both chambers.

The resolution passed in the Senate in February and in the House the following month. Normally, the president has 10 days to veto a resolution, but Congress delayed transmitting the measure to the White House due to the coronavirus pandemic, the Post reported.

It's highly unlikely that either chamber will have the two-thirds majority that would be necessary to override Trump's veto. This marked the seventh veto of Trump's presidency, and the five attempts to override his previous vetoes failed.

In a statement responding to Trump's veto, Kaine said: “Last year, in President Trump's State of the Union remarks, he said: 'Great nations do not fight endless wars.' But instead of following through on his word, President Trump vetoed legislation that would help avoid unnecessary war in the Middle East. I urge my colleagues to join me in voting to override his veto. Unless there's a carefully reached consensus in Congress that war is necessary, we should not be sending our troops into harm's way.”

Trump said the resolution harmed his ability to protect the US

In a statement, Trump said the resolution “purported to direct me to terminate the use of United States Armed Forces in hostilities against Iran.”

“This was a very insulting resolution, introduced by Democrats as part of a strategy to win an election on November 3 by dividing the Republican Party. The few Republicans who voted for it played right into their hands,” Trump added.

Trump said the resolution would have greatly harmed his ability to protect the U.S. and its allies.

“The resolution implies that the President's constitutional authority to use military force is limited to defense of the United States and its forces against imminent attack. That is incorrect,” Trump said. “We live in a hostile world of evolving threats, and the Constitution recognizes that the President must be able to anticipate our adversaries' next moves and take swift and decisive action in response. That's what I did!”

The statement went on to say that the strike on Soleimani was legal and justified under the 2002 Authorization for Use of Military Force (AUMF) and Article II of the Constitution. This echoed previous justifications of the strike from the administration, which top legal scholars have questioned.

Article II provides the president with the power to act on imminent threats to the nation. But the Trump administration has not yet provided conclusive evidence that Soleimani posed an “imminent” danger to the US. A two-page White House memo on the Soleimani strike that was made public by a congressional committee in February didn't make any mention of an “imminent” threat.

The 2002 AUMF, approved on October 16, 2002, authorized “the use of United States Armed Forces against Iraq.” The Iraq AUMF included language that authorized the president “to use the Armed Forces of the United States as he determines to be necessary and appropriate in order to — (1) defend the national security of the United States against the continuing threat posed by Iraq; and (2) enforce all relevant United Nations Security Council resolutions regarding Iraq.”

Relying on the 2002 AUMF to justify the strike “would require a conclusion that the threat from Soleimani, an Iranian government official, was posed by Iraq. In other words, relying on the law is as good as admitting there is no legal basis,” Oona A. Hathaway, a professor of international law at Yale Law School, wrote in the Atlantic in January.

The Soleimani strike, which took place in Iraq back in early January, pushed the U.S. and Iran to the brink of war. It prompted an Iranian attack on U.S. forces in Iraq. No U.S. service members were killed, which is a large part of the reason the U.S. and Iran were able to step away from a broader confrontation.

The strike and its aftermath also shattered the already fragile 2015 nuclear deal with Iran, which Trump controversially withdrew from in May 2018 — against the wishes of key US allies.

Tensions between Washington and Tehran remain high as the Trump administration continues to hammer Iran with crippling economic sanctions, even amid the coronavirus pandemic.

In the latest example of the ongoing, incendiary rhetoric traded between the two countries, Iranian President Hassan Rouhani on Wednesday threatened the US with a “crushing response” if it moves to extend an arms embargo that the UN is poised to lift in October.