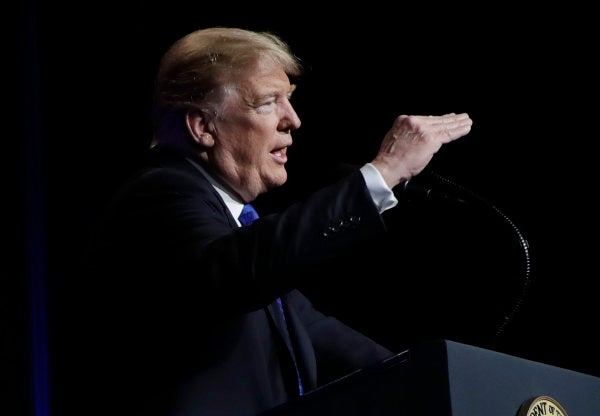 “Our strategy is grounded in one overriding objective: to detect and destroy every type of missile attack against any American target, whether before or after launch,” Trump told military brass and Defense Department officials gathered at the Pentagon for release of the administration's long-awaited missile defense strategy.

Trump's expansive vision of an impenetrable U.S missile shield — one first enunciated by President Ronald Reagan 35 years ago — goes well beyond the Pentagon's technical and scientific capacity, the reality that grounded most of Reagan's “Star Wars” initiative.

Nor does it reflect the Trump administration's near-term goals, which remain focused on developing the capability to knock out a limited missile strike by Iran or North Korea, and, at least theoretically, new short- and medium-range weapons being developed by China and Russia that could threaten Europe and Asia.

But Trump used the speech to press his “American First” agenda, fitting his call for expanded missile defense with familiar broadsides on Democrats in Congress for blocking his proposed border wall and on U.S. allies for failing to pay enough for their own defense.

Democrats in Congress, even some who have backed the development of the current limited U.S. missile defense system, questioned Trump's vision of a vast shield over the nation.

“An effective missile defense system can serve as a deterrent to conflict, protect our forward-deployed forces and the homeland, and create an opening for diplomacy,” said Sen. Jack Reed, D-R.I., a member of the Senate Armed Services Committee. “But it's not a magic bulletproof shield and it comes with a considerable price tag.”

“The rest of the world is not developing new fighters and bombers; they are developing missiles,” Shanahan said. “America's competitors, including China and Russia, are expanding their missile arsenals … and (have) integrated these more effectively into war planning.”

Trump failed to mention Russian or China in his speech. Nor did he mention North Korea, which has tested a suspected hydrogen bomb and a long-range ballistic missile capable of reaching the United States since Trump took office.

After a summit in Singapore last June with North Korean leader Kim Jong Un last year and a suspension of its nuclear testing, Trump declared that Pyongyang no longer represented a nuclear threat to the U.S.

Experts say they've seen no sign that Kim's regime has taken any steps to give up its nuclear weapons arsenal or production, however. Several senior North Korean officials were expected in Washington this week to discuss a possible second summit between Trump and Kim, and apparently to try to revive the stalled talks.

The Missile Defense Review, which the Pentagon released as Trump spoke, calls for researching and development of new technologies that can detect and intercept missiles, including so-called hypersonic missiles, which travel at five or more times the speed of sound.

The review calls for a study next year on the feasibility of developing and launching sensors in space that could detect missile launches around the globe. It also calls for further research into lasers and other so-called directed energy devices that could, in theory, knock out ballistic missiles early in flight.

The Pentagon is supposed to deliver a report within six months on the feasibility of placing nonnuclear missile defense interceptors on satellites.

The administration plans to add more interceptors to the existing missile defense sites at Fort Greeley in Alaska and at Vandenberg Air Force base in California. The report calls for studying the option of adding a third interceptor site on the East Coast, an idea aimed at bolstering defenses against a possible limited missile attack from Iran.

Even an expanded missile shield would not stop a major attack by Russia or China, U.S. officials said.

Both countries have large arsenals of intercontinental ballistic missiles topped with nuclear warheads that U.S. officials say could overwhelm an expanded U.S. system in a large-scale nuclear exchange.

To deter China and Russia, the U.S. continues to rely on deterrence and the threat that it would respond to any nuclear attack with a devastating counter-salvo of ballistic missiles carrying nuclear warheads from silos in the U.S. and sea-based submarines.

“They have very large sophisticated arsenals and we are postured to rely on our deterrent to deter Russia and China” from large-scale attacks on the U.S., a senior official told reporters.

But short- and medium-range missiles being developed by China and Russia could be targeted by expanded U.S. defenses aimed at so-called regional threats in Europe and Asia, officials said.

WATCH NEXT: Russia May Have A New Space Weapon