Asked if the US is going to war with Iran, Trump says, ‘Hope not’

President Donald Trump said on Thursday he hoped the United States was not heading to war with Iran as he prepared to meet with Switzerland President Ueli Maurer, whose nation has served as a diplomatic conduit between the two countries 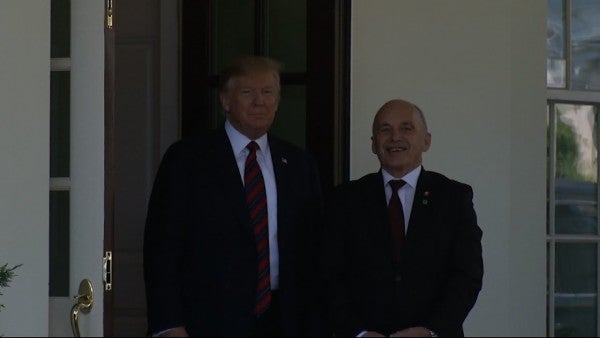 U.S. President Donald Trump said on Thursday he hoped the United States was not heading to war with Iran as he met with Switzerland President Ueli Maurer, whose nation has served as a diplomatic conduit between the two countries.

Asked by reporters Washington was going to war with Tehran, Trump responded, “Hope not” as he greeted Maurer at the White House.

Tensions have escalated in recent days with increasing concerns about a potential U.S.-Iran conflict. Earlier this week the United States pulled some diplomatic staff from its embassy in Baghdad following weekend attacks on four oil tankers in the Gulf.

Switzerland, a neutral country, has historically been a liaison between the United States and Iran, which have no diplomatic relations.

A White House statement said the two leaders discussed “a range of international issues, including the crises in the Middle East and in Venezuela.”

“President Trump expressed his gratitude for Switzerland's role in facilitating international mediation and diplomatic relations on behalf of the United States,” the statement said.

The Washington Post, citing unnamed U.S. officials, reported late Wednesday that Trump preferred a diplomatic route with Iran and direct talks with its leaders but worried that some of his advisers were pushing war.

White House spokeswoman Sarah Sanders told Fox News Channel's “Fox & Friends” that there is no friction between Trump and his advisers and he welcomes different viewpoints.

“He's the one the American people elected. He's going to take in the information and the guidance from all of his national security team and he then will make a decision on what he thinks is the best and safest thing for the American people,” she said.