Trump Tweeted A Warning To Syria And Its Allies. Then The Russian Strikes Began 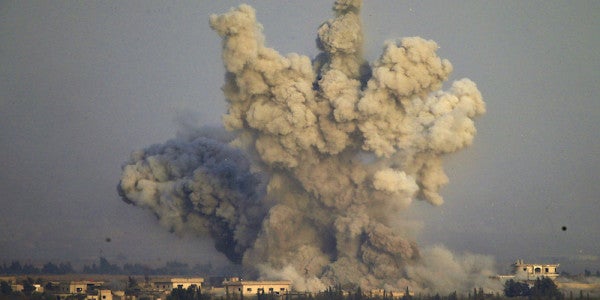 BEIRUT — Russian jets began an intense barrage on Syria’s northwest, pounding rebel-held areas on Tuesday in Idlib province and surrounding regions that have become the last sanctuary for the opposition to President Bashar Assad, activists and a war monitor said.

The onslaught came hours after President Donald Trump warned in a tweet that Assad “must not recklessly attack Idlib Province.”

President Bashar al-Assad of Syria must not recklessly attack Idlib Province. The Russians and Iranians would be making a grave humanitarian mistake to take part in this potential human tragedy. Hundreds of thousands of people could be killed. Don’t let that happen!

Nikki Haley, the U.S. ambassador to the United Nations, also tweeted: “All eyes on the actions of Assad, Russia, and Iran in Idlib. #NoChemicalWeapons,” a reference to the Syrian government’s use of chemical weapons against its rebel adversaries.

The White House later issued a statement saying that if Assad “chooses to again use chemical weapons, the United States and its Allies will respond swiftly and appropriately.”

Russia is Assad’s top international backer; its forces, including aircraft, special forces, and mercenaries, enabled him to reverse the course of his country’s seven-year civil war, which has killed hundreds of thousands of people and displaced millions more.

Successive Russian-backed campaigns over the last two years have seen the government retake every major opposition bastion, offering fighters who refused to lay down their arms safe passage to Idlib.

But with no other enclaves remaining, the government has massed its forces in recent weeks for a campaign to retake the province, which is dominated by hard-line Islamist groups, including an estimated 10,000 al-Qaida affiliated local and foreign jihadis, and others factions under Turkey’s control.

Tuesday’s strikes, the first in 22 days, were seen as the routine escalation that precedes every ground offensive on rebel enclaves, endangering what the United Nations estimates are Idlib’s 2.9 million residents.

More than half of the province has already been displaced at least once before. Hundreds of thousands are expected to flee, but with Idlib’s border with Turkey sealed, there is no exit except to government-controlled areas.

The Syrian Observatory for Human Rights, a pro-opposition U.K.-based monitoring group with a network of activists in Syria, said Russian warplanes had conducted about 45 strikes on rebel areas in Idlib, the Ghab plains and the mountains of neighboring Latakia province.

The attacks had killed 12 people, including a number of children, and wounded 30 others, the Syrian Observatory group said.

In recent weeks, Russia and Turkey have engaged in intense discussions to avert what the U.N. special envoy for Syria, Staffan de Mistura, said would be a “bloodbath” in Idlib.

On Tuesday, he appealed to Turkey and Russia to find a “soft solution” that would protect civilians, according to a U.N. report of a news briefing in Geneva.

He added that news reports indicated the assault would begin Monday, and securing protection for residents was “urgent.”

Ankara has bolstered its presence in Idlib as well, sending in tanks to reinforce two Turkish army observation posts, many of them set close to the jihadis’ positions.

Turkey, fearing additional refugees, is adamant that an offensive be averted.

Related: How The Russian Military Turned War-Torn Syria Into A Testing Playground »

Secretary of State Michael R. Pompeo spoke Tuesday with Turkey’s foreign minister, Mevlut Cavusoglu, according to a statement by State Department spokeswoman Heather Nauert, and agreed “that any Assad regime military offensive in Idlib would be an unacceptable, reckless escalation of the conflict in Syria.”

“A nest of terrorism has formed there. A quite large group of terrorists” is entrenched there, said Peskov.

“This leads to general destabilization and undermines the attempts to steer the situation to diplomatic and political settlement.”

He added that rebel groups had launched drone attacks on Russia’s air base in Latakia and posed “a substantial threat.”

airstrikes
analysis
How The Other Half Fights
new
Politics