Trump’s ‘maximum pressure’ on foreign adversaries has hit its limit

IIn two years as president, Donald Trump built a foreign policy strategy on applying as much pressure as possible on enemies — and even some allies — to make them bend to America's will. Yet no adversary has buckled. So, short of war, what does the U.S. do now? 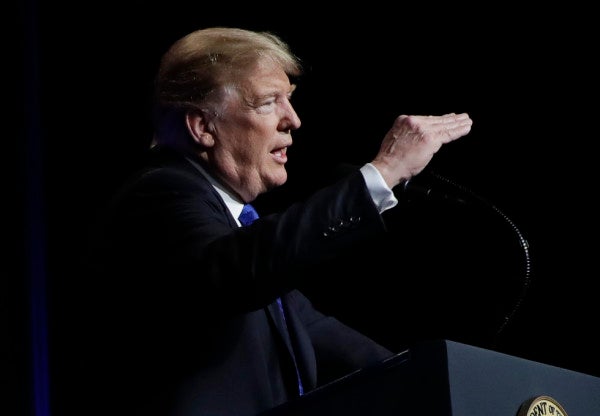 WASHINGTON — In two years as president, Donald Trump built a foreign policy strategy on applying as much pressure as possible on enemies — and even some allies — to make them bend to America's will.

Venezuela, North Korea and Iran have all been targets of the administration's “maximum pressure” approach. Under Trump, U.S. sanctions were deployed to notable effect: Venezuela's battered economy is more isolated than ever, Iran has seen oil sales plummet and North Korea has struggled as fuel and electricity shortages crimp output and food shortages loom.

Yet no adversary has buckled. So, short of war, what does the U.S. do now?

“As a great power, the United States does have a lot of options,” said Jonathan Alterman, director of the Middle East Program at the Center for Strategic and International Studies. “At the same time, though, other countries have lots of options, too, and the administration sometimes seems surprised that they are not merely submitting to superior U.S. power.”

The challenge the U.S. faces, and the loneliness of its campaign, were on display during Secretary of State Michael Pompeo's hastily scheduled stop in Brussels this week, when he met with the foreign ministers of the U.K., France and Germany to underscore the urgency of the threat posed by Iran. But European leaders openly expressed their exasperation with the U.S. approach to Iran.

“I have to say that this is a distressful example of U.S. unilateralism — it is short-term and inconsiderate of interests” of some of its closest allies, Germany's Deputy Foreign Minister, Niels Annen, said afterward during a speech in Berlin. “The current situation in the region, ladies and gentlemen, is extremely dangerous.”

Annen's remarks reflected how U.S. goals have been tripped up by its consistent use of strong-arm tactics with nations whose support it later needs to box in its adversaries. Allies such as Canada, France, the U.K., Mexico and Germany have all come in for withering public criticism for not bending to U.S. requests on key issues — only to be courted on others.

One senior administration official, who asked not to be identified discussing internal matters, said there were two ways to read the Europeans' response in Brussels: Either they don't believe the U.S. assessment of the new threats from Iran and want to tame the administration's impulses. Or the situation is just the opposite: They believe the threats but don't want to publicly admit it, for fear of giving momentum to a potential military confrontation.

While Trump has said he's optimistic that “Iran will want to talk soon,” his national security adviser, John Bolton, has advocated regime change and even preemptive strikes against Tehran for years.

Pompeo, a former CIA director, is also seen as a hard-liner on the Islamic Republic, although he's said his goal isn't to seek a war with Iran or impose regime change from outside. His advisers argue that the maximum-pressure campaign already has limited Iran's ability to wreak havoc in the region.

“If you look at 40 years of this regime, they change their behavior when one or more of these elements are present: economic pressure, diplomatic isolation and the threat of military force,” Brian Hook, Pompeo's special envoy on Iran, said of the government in Tehran. “We think this is the right approach.”

In Tehran, officials say they won't negotiate under duress. And without a functioning diplomatic back channel, it's not clear how talks would even be initiated.

“Nobody is going to call Trump, and eventually the Americans will be forced to raise the issue of negotiations with Iran in a serious way,” Heshmatollah Falahatpishe, the head of Iran's parliamentary commission for national security and foreign affairs, said in a speech before his nation's lawmakers, according to the Islamic Students' News Agency.

North Korea policy also appears at a stalemate. Tensions were raised between the two countries in 2017, when Pyongyang was undertaking a series of nuclear and missile tests and Trump responded by threatening to rain down “fire and fury” on Kim Jong Un's regime. He reversed course quickly, however, to open talks and offer effusive praise for the North Korean dictator, even saying they “fell in love.”

Yet little has been accomplished diplomatically: Pyongyang is further along in its weapons program and there's no clear path toward the denuclearization Trump's team says is its goal. One victory the U.S. has touted — a suspension of major missile and weapons tests — is teetering. Earlier this month North Korea held two separate rounds of short-range missile tests that are barred under United Nations sanctions, leading even Trump to scale back his previously optimistic tone about the talks.

“Nobody's happy about it,” Trump told reporters last week. “I don't think they're ready to negotiate.”

The risk for Trump and the world is greatest now over Iran. Even with both sides saying they don't want war, analysts flag the risk of an accident or unintended clash turning into something larger.

“Brinkmanship with Iran could quite easily backfire,” said Paul Sullivan, a Middle East expert at Georgetown University's Center for Security Studies. “Batting mosquitoes with sledge hammers can be very costly for the batter, not just the mosquitoes.”