Vincent Viola, owner of the Florida Panthers hockey team, withdrew his nomination as U.S. Secretary of the Army, saying extricating... 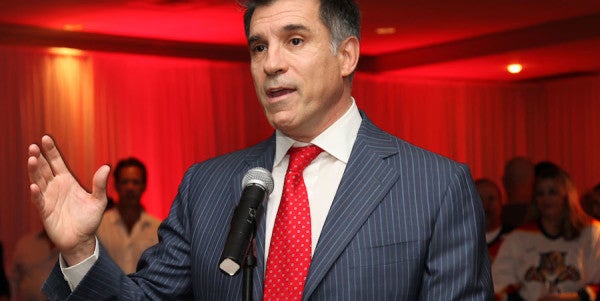 Vincent Viola, owner of the Florida Panthers hockey team, withdrew his nomination as U.S. Secretary of the Army, saying extricating himself from his extensive business ties has “proven insurmountable,” according to a statement he issued Friday night.

“I am deeply honored to have been considered for this post, and appreciate the confidence President Trump showed in me,” Viola said in the statement. “I offer my continued support for President Trump and his administration, and look forward to re-doubling my efforts to support the Army and its veterans as a private citizen.”

Viola is the first Trump nominee to withdraw. The Senate would have had to confirm him as Secretary of the Army.

The Wall Street billionaire has a majority interest in Eastern Air Lines, a Miami-based airline that was recently resurrected as a charter company. The New York Times reported Thursday Viola was trying to swap his Eastern ownership for a stake in Swift Air, a charter airline that has secured millions of dollars in federal government sub-contracts. Some of those contracts involve deporting undocumented immigrants, the Times reported.

Besides Viola’s ownership in Eastern and the Panthers, the 60-year-old West Point graduate is the founder of the trading firm Virtu Financial. CEO Doug Cifu, who co-owns the firm, was supposed to take over after Viola’s confirmation as Army Secretary.

He planned to transfer ownership of the Panthers to his family.

Viola didn’t donate to Trump’s campaign, but the Eastern Airlines plane the Panthers used to travel was repurposed for Vice President Mike Pence’s campaign. An August Trump rally was held at the Panthers’ home arena, the BB&T; Center in Sunrise.

In June, when the Panthers unveiled their new military-inspired team uniforms, Viola, an Army captain, talked about his devout patriotism.

He joined the Army at a time when anti-military sentiment was high. In an interview with the West Point Center for Oral History, Viola talked about attending a Vietnam War protest when he was 16. He and his friends brought American flags and confronted the activists in what he called an “interesting face-off” for “that small minority of us who felt this almost romantic attachment to the ideals of the country.”