U.S. service members who've filed by going to the TurboTax Military landing page told ProPublica they were charged as much as $150 even though, under a deal with the government, service members making under $66,000 are supposed to be able to file on TurboTax for free 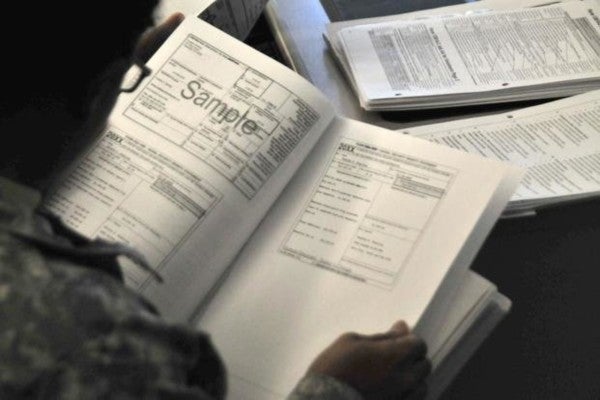 In patriotism-drenched promotions, press releases and tweets, TurboTax promotes special deals for military service members, promising to help them file their taxes online for free or at a discount.

Yet some service members who've filed by going to the TurboTax Military landing page told ProPublica they were charged as much as $150 — even though, under a deal with the government, service members making under $66,000 are supposed to be able to file on TurboTax for free.

Liz Zimmerman is a mother of two teenage daughters and a toddler who lives with her husband, a Navy chief petty officer, in Bettendorf, Iowa, just across the river from the Rock Island military facility. When Zimmerman went to do her taxes this year, she Googled “tax preparation military free” and, she recalled in an interview, TurboTax was the first link that popped up, promising “free military taxes.” She clicked and came tothe site emblazoned with miniature American flags.

But when Zimmerman got to the end of the process, TurboTax charged her $60, even though the family makes under the $66,000 income threshold to file for free. “I've got a kid in braces and I've got a kid in preschool; $60 is half a week's worth of groceries,” she said. “Who needs date night this month? At least I filed my taxes.”

In the commercial version of TurboTax that includes the “military discount,” customers are charged based on the tax forms they file. The Zimmermans used aform to claim a retirement savings credit that TurboTax required a paid upgrade to file. If they'd started from the TurboTax Free File landing page instead of the military page, they would have been able to file for free.

Like many other tax prep companies, Intuit, the maker of TurboTax, participates in the Free File program with the IRS, under which the industry offers most Americans free tax filing. In return, the IRS agrees not to create its own free filing system that would compete with the companies. But few of those who are eligible use the program, in part because the companies aggressively market paid versions, often misleading customers. We've documented how Intuit had deliberately made its Free File version difficult to find, including by hiding it from search engines.

In a statement, Intuit spokesman Rick Heineman said, “Intuit has long supported active-military and veterans, both in filing their taxes and in their communities, overseas, and in the Intuit workplace.” He added: “Intuit is proud to support active military, including the millions of men and women in uniform who have filed their tax returns completely free using TurboTax.”

To find TurboTax's Free File landing page, service members typically have to go through the IRS website. TurboTax Military, by contrast, is promoted on the company's home page and elsewhere. Starting through the Military landing page directs many users to paid products even when they are eligible to get the same service for no cost using the Free File edition.

An Intuit press release this year announced “TurboTax Offers Free Filing for Military E1- E5″ — but refers users to TurboTax Military and does not mention the actual Free File option. (E1-E5 refers to military pay grades.) It was promoted on the company's Twitter feed with a smiling picture of a woman wearing fatigues outside her suburban home. Google searches for “TurboTax military,” “TurboTax for soldiers” and “TurboTax for troops” all produce top results sending users to the TurboTax Military page.

That site offers a “military discount.” Some service members can use it to file for free, depending on their pay grade and tax situation. Others are informed — only after inputting their tax data — that they will have to pay.

In one instance, Petty Officer Laurell, a hospital corpsman in the Navy who didn't want his full name used, was charged even though he makes under $66,000. TurboTax charged Laurell $95 this year and $100 last year, his receipts show.

“I am upset and troubled that TurboTax would intentionally mislead members of the military,” said Laurell, who has been in the service for a decade.

Using receipts, tax returns and other documentation, we verified the accounts from four service members who were charged by TurboTax even though they were eligible to use Free File. They include an Army second lieutenant, a Navy hospital corpsman and a Navy yeoman.

The New York regulator investigating TurboTax is also examining the military issue, according to a person familiar with the probe.

Active-duty members of the military get greater access to Free File products than other taxpayers. All Americans who make under $66,000 can use products offered by one of 12 participating companies in the program. But each company then imposes additional, sometimes confusing eligibility requirements based on income, age and location.

Those additional requirements are not imposed on service members for most of the Free File products.

TurboTax's Free File edition, for example, is available to active-duty military and reservists who make under $66,000 in adjusted gross income compared with a threshold of $34,000 for everyone else.

It's unclear how many service members were charged by TurboTax, even though they could have filed for free. The company declined to respond to questions about this.

Jennifer Davis, government relations deputy director of the National Military Family Association, said the group is concerned by ProPublica's findings about Americans being charged for tax services that should be free. “As an organization dedicated to improving the well-being of military families, we are concerned that many military families have fallen prey to these fraudulent actions as well,” she said. Davis pointed out that service members have a range of other free tax filing options, including in-person help on many bases and an online option through the Defense Department called MilTax.

We tested TurboTax Military and TurboTax Free File using the tax information of a Virginia-based Navy sailor and his graphic designer wife with a household income of $53,000.

The filing experiences had just one major difference: TurboTax Military tried to upgrade us or convince us to pay for side products six times. We declined those extras each time. Finally, the program told us we had to pay $159.98 to finish filing.

And that “military discount”? All of $5.

In the Free File version, by contrast, we were able to file completely free.

Here's what happened when we landed on TurboTax Military:

The software took us through filing our taxes in the standard question-answer format used across all TurboTax products. We entered the sailor's employer and income information.

Then TurboTax told us we were going to save some money because of our service.

“Congrats! You qualify for our Enlisted military discount.”

We were then repeatedly offered other paid products.

TurboTax recommended we purchase “+PLUS,” which promises “24/7 tax return access” and other services for $19.99.

We were also offered “MAX,” which includes audit defense and identity loss insurance for $59.99 (a good deal, the company suggests, because the products represent a “$125.00 value”).

We rejected all of these offers. We finished filing the sailor's military income and added his wife's 1099 income of $15,000 and her modest business expenses.

When we were done entering their information, the software broke some bad news: We would need to upgrade to TurboTax Self-Employed for $114.99 (minus $5 thanks to the military discount).

When we started on TurboTax Free File instead of TurboTax Military and entered the same information, the filing experience was virtually identical, with two major differences: We weren't pitched side products such as audit defense and the final price was $0.

While the sailor's family was eligible for Free File, TurboTax Military never directed us to the product, even after we entered a family income of less than $66,000.

On May 10, the New York Department of Financial Services sent a request for documents to USAA, the insurance company that caters to service members, according to a person familiar with the investigation. USAA promotes TurboTax Military, and DFS, which regulates insurance companies, sought records related to any deals with Intuit and other tax prep firms. Two other insurance companies, Progressive and AAA, also received requests for records from DFS. Spokespeople for the three companies didn't respond to requests for comment.

TurboTax first launched the Military Edition in 2012. “TurboTax has a long history of supporting the military and many of our employees have served our country,” the then-head of TurboTax said in the company's press release.

It has apparently been a lucrative business. On an earnings call six months later, Intuit's then-CEO Brad Smith boasted “we saw double-digit growth this season from the military and digital native customer segments.”

“Given our scale and our data capabilities,” he said, “we plan to extend this advantage to even more taxpayers next season.” Smith is now executive chairman of Intuit's board.

Last week, a class action was filed against Intuit by a law firm representing a Marine, Laura Nichols, who was charged by TurboTax even though she was eligible to file for free, according to the complaint. The suit cites ProPublica's previous reporting on the issue. The company declined to comment.

SEE ALSO: Trump's Tax Cut Was A Disaster For Some Gold Star Families, But It's A Symptom Of A Larger Problem