ANKARA, Turkey –– Turkey’s army is preparing to take over the fight against remnants of Islamic State in Syria now... 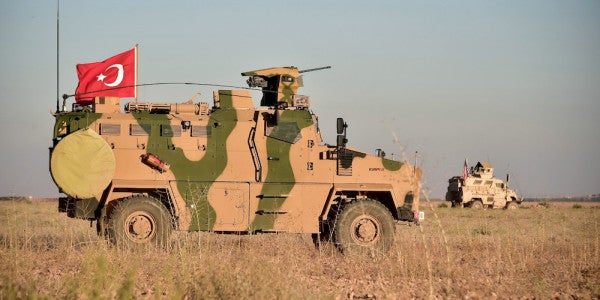 ANKARA, Turkey –– Turkey’s army is preparing to take over the fight against remnants of Islamic State in Syria now that the U.S. is withdrawing its troops.

Turkey is massing troops in Syria to replace U.S.-backed Kurdish fighters in a strategically located town.

Turkey and the U.S. agreed to make sure that Kurdish forces are withdrawn from the northern town of Manbij before the U.S. withdrawal, Turkey’s Foreign Minister Mevlut Cavusoglu said Tuesday. Turkey has insisted that the Kurdish fighters, who are affiliated with the separatist Turkish Kurdish PKK militant group, be withdrawn east of the Euphrates River under a June agreement with Washington.

Manbij is the last major Syrian town controlled by Kurdish forces west of the Euphrates, and Turkey is eager to see all Kurdish forces withdraw east of the river so they can’t attempt to access the Mediterranean.

Turkey wants to fill the power vacuum that will be left in Syria by the withdrawal of American troops, and is coordinating its army’s plans with the U.S. and Russia.

Cavusoglu warned France against shielding Kurdish YPG fighters from a Turkish assault after Kurdish forces called for a larger French role after the U.S. withdrawal.

A broader fight against Islamic State would significantly expand Turkey’s involvement in Syria, where other Islamist militants are trying to keep their last stronghold in the northwest province of Idlib. On Monday, Turkey warned Syria that it would forcefully retaliate against any attack on its military positions there.

Turkey’s strained ties with Washington have improved immeasurably in the past week. The State Department notified Congress of a proposal to sell Patriot air and missile defense systems to Ankara, which has alarmed its NATO allies with its plan to procure S-400 missiles from Russia. Then President Donald Trump yielded to a suggestion from Erdogan to pull U.S. forces from Syria, where they have been fighting Islamic State., shocking even those in his inner circle and leading to the resignation of Defense Secretary James Mattis.