"We have neither the intention nor the notion to face Russia," Turkey's Defense Minister said. 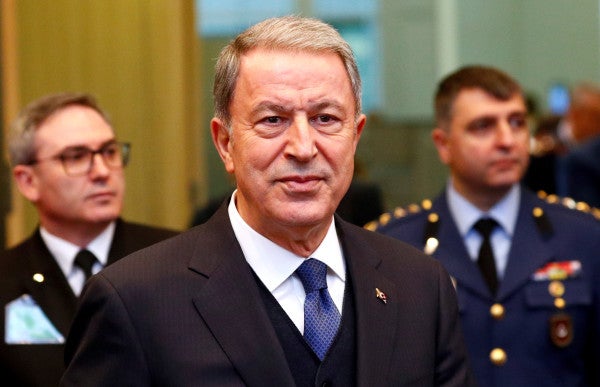 ISTANBUL/BEIRUT (Reuters) – Turkey shot down two Syrian warplanes over Idlib on Sunday and struck a military airport well beyond its frontlines in a sharp escalation of its military operations following the death of dozens of Turkish soldiers last week.

Ankara has ramped up its attacks, including drone strikes, against the Russian-backed Syrian forces since Thursday, when 33 Turkish soldiers were killed in an air strike by Damascus.

It has already deployed thousands of troops and military vehicles in northwest Syria's Idlib province in the last month to stem advances by Syrian government forces which have displaced 1 million people close to Turkey's southern border.

Already hosting 3.6 million Syrian refugees, Ankara is determined to prevent any further influx from Syria. It has also let migrants cross its borders into the European Union, in an apparent effort to press for EU support in tackling the Syria crisis.

In response, Syria's army said it shot down three Turkish drones and warned it would take down any aircraft breaching the air space over the northwest, which has been controlled for years by Syrian President Bashar al-Assad's main ally Russia.

The fighting has risked drawing Russia and Turkey, who cooperated for years to contain the fighting despite backing rival sides in Syria's nine-year war, into direct conflict.

“We have neither the intention nor the notion to face Russia. Our only intention there is for the (Syrian) regime to end the massacre and thereby prevent … radicalization and migration,” Turkey's Akar said.

He said that 2,212 members of the Syrian forces had been “neutralized”, a term used to designate killed, wounded or captured. The Syrian Observatory, a Britain-based war monitor, said 74 Syrian government troops and pro-Damascus fighters had been killed since Feb. 27.

Fifty-five Turkish troops were killed in Idlib in February.

Diplomatic efforts by Ankara and Moscow to defuse tensions have failed to agree a ceasefire in Idlib, part of Syria's last major rebel stronghold.

Turkish Foreign Minister Mevlut Cavusoglu said on Saturday that while there was progress in talks between Turkish and Russian delegations, the Idlib issue would only be resolved between presidents Tayyip Erdogan and Vladimir Putin.

A senior Turkish official and a security official said the meeting would be held on Thursday in Moscow. The officials said the two leaders would discuss steps to take in Idlib and that they were expected to reach a mutual agreement.

The Kremlin said it hoped Erdogan and Putin would meet on Thursday or Friday. Cavusoglu and his Russian counterpart Sergei Lavrov agreed on the need to create a “favorable atmosphere” to improve working relations between their countries, Russia's foreign ministry said.

The latest fighting in Idlib has uprooted 1 million civilians since December, many of them women and children fleeing towards the Turkish border.

Turkey said it would allow migrants to cross into Europe in anticipation of an imminent new migrant influx from Idlib, lifting restraints on movement in place since 2016 under a deal with the European Union.

Greek police fired tear gas to repel hundreds of stone-throwing migrants who sought to force their way across the border from Turkey on Sunday, witnesses said, with thousands more behind them after Ankara relaxed curbs on their movement. [nL8N2AU05E]

Turkey's borders to Europe were closed to migrants under the accord between the Turkish-EU deal that halted the 2015-16 migration crisis, when more than 1 million people crossed into Europe.