A Tuskegee Airman celebrates his 100th birthday with one more flight

Retired Air Force Col. Charles McGee served as co-pilot on one of two flights out of Dover Air Force Base done especially for his birthday 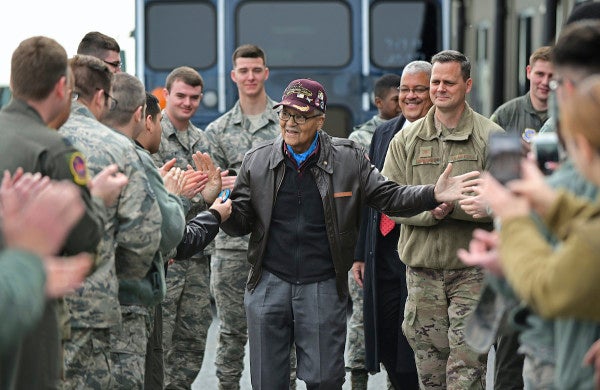 Retired Col. Charles McGee stepped out of the small commercial jet and flashed a smile.

McGee had returned on a round-trip flight Friday morning from Dover Air Force Base, where he served as co-pilot on one of two flights done especially for his birthday.

By the way he disembarked from the plane, it was hard to tell that McGee, a Tuskegee Airman, was turning 100.

Besides the lines on his face, there was little about McGee that suggested he could now be called a centenarian. He had a spring in his step and handled the questions from reporters without missing a beat.

And before he flew in the jet, he conducted his own preflight check. To heck with the 40-degree weather.

McGee could not identify the secret to a long life — “All I can say is it's one of life's blessings,” he said — but his daughter had her own theory.

Every day, he wakes up with a purpose, Yvonne McGee said.

Retired U.S. Air Force Col. Charles McGee, a Tuskegee Airman and a decorated veteran of three wars, flies a Cirrus SF50 Vision Jet with assistance from pilot Boni Caldeira during a round trip flight from Frederick, Maryland, to Dover Air Force Base in Delaware to help celebrate his 100th birthda
(Associated Press/David Tulis)

McGee was a military man, Yvonne McGee said. So much of his purpose was spent dedicated to the Army Air Forces, and later the Air Force when it was established as a separate military branch. He flew 27 of 30 years as part of the service, which is unusual for airmen, she said.

McGee first flew in 1942, he said, when he decided to seek aviation opportunities. He worried he would be drafted and forced to stay on the ground during World War II, he said.

And then he fell in love with flying, he said. He still finds it “marvelous” every time he gets to fly.

“To get up in the air and look down and see the traffic and the ground below, to see the beautiful sky and sunshine above — amazing,” he said.

It's a bug he passed on to his children, Yvonne McGee said. She has her pilot's license, although she does not currently fly. Her brother, Ronald, got more of the flying genes.

When McGee gets around airplanes, he acts like a child, his son said. He lights up.

“It takes him back to his youth,” Ronald McGee said.

Ronald McGee flew in the Air Force like his father. The two flew the same type of plane in the Vietnam War, although Ronald McGee was part of the conflict later than his father.

The two flew together only once, Ronald McGee said. He was the pilot on a trip his father and sister took home from Israel. They had wanted to fly as pilot and co-pilot once, but his mother forbade it.

“She said, 'No, I'm not going to lose you both in the same flight,'” he said. “And I said, 'Well, we're actually both pretty good pilots.' And she took her glasses off, put them down and said, 'What did I say?'”

After Friday's flight, provided by the Aircraft Owners and Pilots Association, there was a celebratory reception for McGee. People, including city of Frederick officials, other veterans and those who wanted to meet McGee came up to wish him a happy birthday and ask for a picture.

Ronald McGee was happy his father received the recognition because the Tuskegee Airmen did not get credit for much of their work when the unit of African-American military pilots was formed during World War II. Many wanted the Tuskegee Airmen to fail.

“There were so many firsts that they had that no one knew of, which really probably would have or helped change America sooner if made public at the time, but America wasn't ready,” Ronald McGee said.

And because it was not talked about, McGee did not tell his children about it. He was a military man and tight-lipped, Ronald McGee said.

Andrew McKenna, a pilot with the Air Force Heritage Foundation, honored McGee with a low-level flyby in a P-51 Mustang, the same type of plane that McGee flew during his service.

It was an honor to fly ahead of McGee, McKenna said.