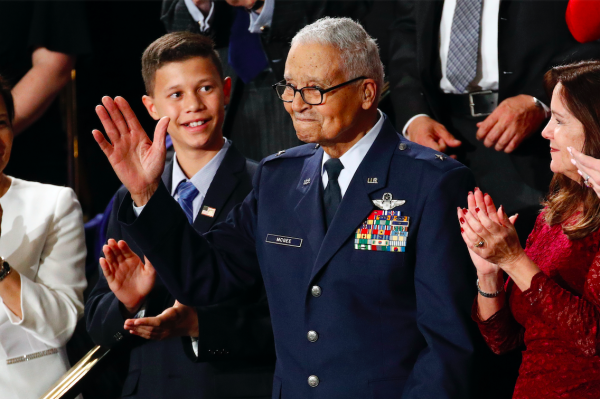 President Donald Trump recognized Marylander Charles McGee — a retired Tuskegee Airman who flew 409 combat missions in three wars and was recently promoted to brigadier general — Tuesday during his third State of the Union address in the House chamber.

The recognition came not long after Trump pinned stars on the 100-year-old McGee's shoulders in the Oval Office, bestowing upon him the prestigious position.

McGee of Bethesda was among a couple of dozen guests invited to the speech. The White House said the guests come from “many walks of life” and include “brave military families to hardworking local leaders.” Each was meant to inspire.

Another guest was McGee's great-grandson Iain Lanphier from Arizona. The boy, an eighth grader, aspires to follow in McGee's footsteps by attending the Air Force Academy. He dreams of going to space.

Born in Cleveland, McGee joined the Army in 1942 and was part of the first group of black military pilots in the Armed Forces. He earned his pilot's wings in 1943.

Despite those contributions, Trump noted that McGee came home from World War II to a country still struggling for civil rights. And still, he went on to fight in the Korean War and the Vietnam War.

He earned a Bronze Star, a Distinguished Flying Cross, a Legion of Merit and the Congressional Gold Medal. McGee memorialized his experiences in the book “Tuskegee Airman.”

McGee, who looked close to tears, stood and was recognized during lengthy applause.

Trump said he was one of the last surviving Tuskegee Airmen. McGee turned 100 on Dec. 7.

“General McGee,” the president said, “our nation salutes you.”

McGee recently was in the national spotlight for participating in the coin toss before the Super Bowl on Sunday. McGee was part of the NFL's efforts to recognize the 75th anniversary of the end of World War II.