Lt. Col. Robert Friend was always glad to share his story with schoolkids — and what a story it was.... 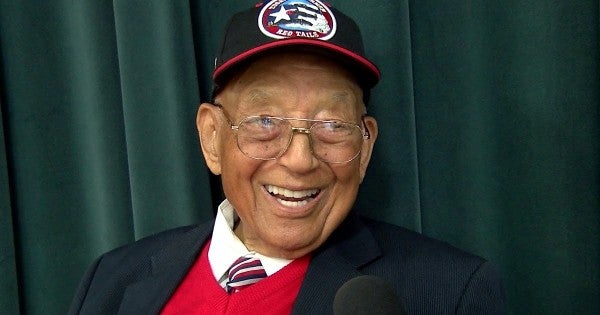 Lt. Col. Robert Friend was always glad to share his story with schoolkids — and what a story it was.

Friend, one of the last surviving Tuskegee Airmen, died Friday at age 99 at his Long Beach, Calif., home.

Not only did Friend fly 142 missions in the iconic black unit in the Army Air Corps, he went on to serve in the Korean and Vietnam wars.

Up until last year, Friend signed autographs and told his story at schools, his daughter Karen Crumlich told KCAL.

The men in his unit were trained at Tuskegee Army Air Field in Alabama, and were the first black aviators in the Air Corps. The airmen completed more than 15,000 missions in Europe and North Africa, and earned more than 150 Distinguished Flying Crosses.

Friend remained in the service when World War II ended, and wound up spending 28 years in the military.

He frequently visited the Palm Springs Air Museum, which restored a P-51 Mustang “Bunny” similar to the one flown by Friend during World War II.

“He was our guiding light,” said Air Museum Director Fred Bell told The Desert Sun. “It will be a long time before there is another man like him.”

He died of sepsis, surrounded by family and friends after they said a prayer, his daughter said.

“And during the prayer, right when we said 'amen,' he took his last breath,” Crumlich told KCAL.

The Tuskegee Airmen Inc. said it's impossible to know exactly how many members from the program that ran March 22, 1941 to Nov. 5, 1949 are still alive, but there were but as of May 2019, there were 12 of 355 single-engine pilots who served in the Mediterranean theater operation during World War II still alive.

The ranks dropped by one on Friday, but Friend's daughter says she will “keep his legacy alive by telling his story to anyone who wants to hear it.”