The U.S. military acknowledged Saturday that it carried out a bombing run in eastern Syria that may have inadvertently killed... 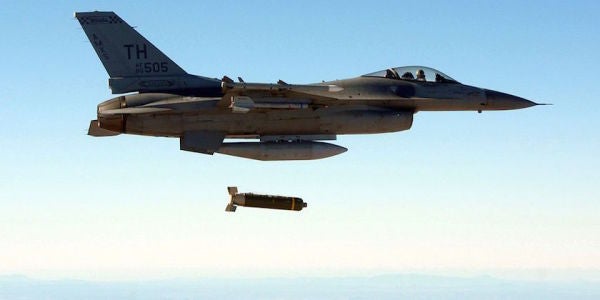 The U.S. military acknowledged Saturday that it carried out a bombing run in eastern Syria that may have inadvertently killed 60 Syrian soldiers, prompting bitter denunciations from Damascus and its Russian allies, who accused the U.S. of siding with Islamic State.

The Russian Defense Ministry said the attack, which took place after 5 p.m. Saturday, was carried out by two F-16 and two A-10 aircraft near the airport of Dair Alzour, a government base besieged by the extremists.

“Coalition forces believed they were striking a Daesh fighting position that they had been tracking for a significant amount of time before the strike,” U.S. Central Command said in a statement, using an Arabic acronym for Islamic State.

“The coalition airstrike was halted immediately when coalition officials were informed by Russian officials that it was possible the personnel and vehicles targeted were part of the Syrian military.”

Maj. Gen. Igor Konashenkov, a Russian Defense Ministry spokesman, quoted Syrian authorities as saying that 62 of their soldiers were killed and more than 100 injured.

Islamic State militants launched an offensive immediately after the airstrike, he said. “Now, fierce armed clashes with terrorists are raging in the area of the airport.”

The 188th Fighter Wing in Fort Smith, Ark., welcomed its transition from F-16s to A-10s April 14. Federal, state and local elected officials along joined unit members to say farewell to the F-16 (foreground) and hello to the A-10 (background).U.S. Air Force photo by Master Sgt. Bob Oldham

The bombing adds further strain to a tenuous U.S.- and Russian-brokered cease-fire that took effect Monday. There have already been reports of violations on both sides, with Moscow and Washington accusing each other of not living up to the commitments they made at a meeting in Geneva.

In a sign of the enduring distrust between the countries, which back opposite sides in Syria’s 5-year-old war, Russia suggested Saturday that the U.S. was acting in defense of Islamic State.

“If we had suspicions earlier that this is in defense of [Al Nusra Front], then now, after today’s airstrikes on the Syrian army, we come to a scary conclusion — the White House defends” Islamic State, said Maria Zakharova, a Russian Foreign Ministry spokeswoman.

Al Nusra Front, which renamed itself the Front for the Conquest of Syria, was until recently the official Al Qaeda affiliate in Syria.

“We demand explanations from Washington — whether this is a deliberate policy to support IS or a mistake,” Zakharova said, referring to Islamic State.

Her statement was in the same vein as comments by Russian President Vladimir Putin, who earlier Saturday expressed doubts about U.S. commitment to the cease-fire and claimed that Washington wasn’t willing to split with what he called “terrorist forces.”

The Syrian military said the airstrike on an army position on Tharda Mountain “clearly paved the way for ISIS terrorists to attack the position and take control of it.”

This “serious and blatant aggression against the Syrian Arab Republic and its army … constitutes conclusive evidence that the United States and its allies support ISIS and other terrorist organizations,” it said in a statement carried by state-run media, using another acronym for Islamic State.

The U.S. military, however, said it had coordinated the strike with Russia.

The Central Command, which is responsible for U.S. military activities throughout the Middle East, said Syria is a complex environment with various military forces and militias in close proximity. But it said members of the U.S.-led coalition fighting Islamic State would not intentionally strike a known Syrian military unit.

“The coalition will review this strike and the circumstances surrounding it to see if any lessons can be learned,” Central Command said.

There have been fears that the U.S. military might accidentally strike Syrian or Russian forces since the U.S.-led air campaign began more than two years ago. The U.S. has no contact with Syrian President Bashar Assad’s government and limited military-to-military communications with Moscow.

The Pentagon and Russian military established an emergency communications line in October to ensure that the two countries' pilots do not mistakenly run into — or fire upon — each other as they conduct daily bombing runs over Syria.

The Pentagon used the line twice this summer: to warn the Russians after they hit U.S.-backed rebels with an airstrike in the southern town of Tanf, and again after Syrian fighter jets nearly hit U.S. special operations forces in the northeastern city of Hasakah.

If the latest cease-fire holds, and relief supplies start flowing to regions besieged by Syrian government forces, the U.S. has agreed to set up a center with Russia to exchange intelligence and coordinate operations against the Front for the Conquest of Syria and Islamic State.

“If this airstrike was caused by a target location error, it is a direct consequence of the U.S.’s stubborn unwillingness to coordinate with Russia its efforts against terrorist groups throughout Syria,” Konashenkov said.

Central Command said the airstrike took place in an area that had been hit by the coalition in the past, and coalition officers at the air operations command hub in Qatar had informed Russian counterparts of the upcoming strike.

If so, it is hard to see how the setting up of a coordination center would have averted what was by all appearances a major targeting error.

Another question left unanswered Saturday night was why the U.S., apparently with Russian concurrence, was targeting Islamic State at the edge of a Syrian military base — one where Russian officers are reported to have been present — and why the combined forces of Russia and Syria were seemingly unable to conduct their own defense.

7:20 p.m.: This article was updated with additional details and comments.

It was originally published at 1:15 p.m.