“If that is what happened, then Congress made a substantive oversight." 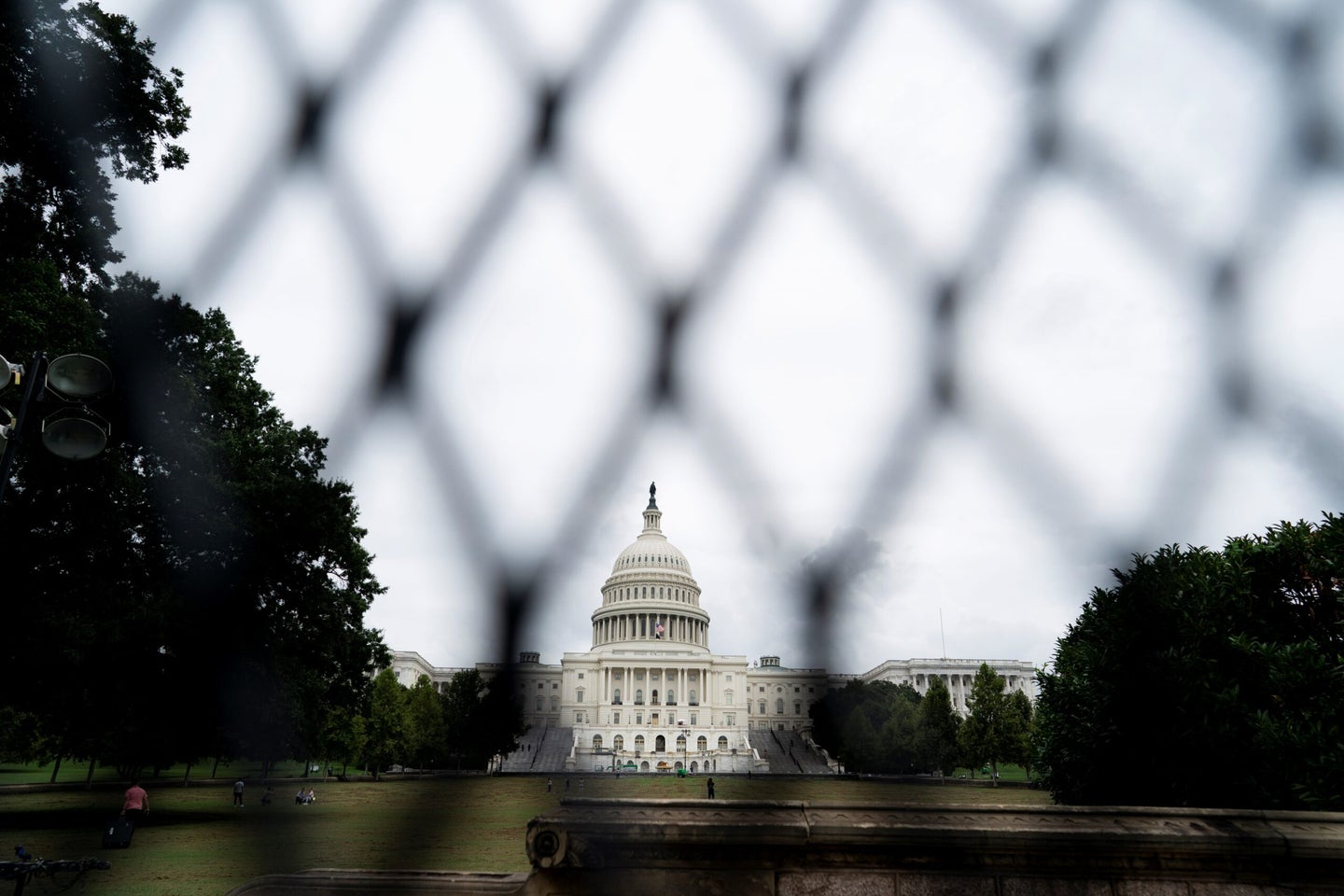 Photo taken on Sept. 17, 2021 shows the U.S. Capitol building, seen through a barrier fence, in Washington, D.C. TO GO WITH "Roundup: Safety measures taken around U.S. Capitol prior to weekend right-wing rally" (Photo by Liu Jie/Xinhua via Getty Images).
SHARE

A mistake made by Congress years ago has helped a soldier found guilty of sexually assaulting his 10-year-old daughter get a reduced prison sentence and other convicted child molesters could eventually follow suit.

Army Staff Sgt. Danny McPherson was found guilty in March 2017 of six counts of indecency with a child, one count of assault consummated by battery, and two counts of aggravated sexual contact with a child. The assaults occurred at various times throughout 2004, according to court documents. He was sentenced to 28 years behind bars, forfeiture of all pay and allowances, a dishonorable discharge, and a reduction to the rank of private.

The counts of indecency with a child occurred in 2004, according to an overview of the case from the Army Court of Criminal Appeals. Between May 1 and Aug. 24, McPherson kissed and sexually touched his daughter at their home at Fort Campbell, Kentucky, “all with the intent to gratify his sexual desires,” the documents from Army Court of Criminal Appeals say. He “continued to use his daughter for his own sexual gratification” between Aug. 25 and Dec. 31, 2004, while she was staying at her grandmother’s house in Illinois.

But McPherson appealed the guilty verdict to the Army Court of Criminal Appeals and argued that an update to the Uniform Code of Military Justice that changed the statute of limitations for child abuse offenses, brought about by Congress in the 2017 National Defense Authorization Act (NDAA), meant he should not have had the six counts of indecency with a child held against him.

“Congress may not have realized the importance of continuing to include offenses under Article 134, UCMJ, so that the definition of ‘child abuse offense’ would continue to apply to indecent acts committed under the previous statutory scheme,” the U.S. Court of Appeals for the Armed Forces wrote in its decision. “If that is what happened, then Congress made a substantive oversight in drafting the statute. We can recognize that this kind of mistake in statutory drafting occurred, but we cannot take upon ourselves the task of rewriting [the UCMJ] to make the definition of ‘child abuse offense’ more inclusive.”

How a convicted sex offender managed to get more than a decade dropped from his sentence boils down to a mere oversight from Congress as they worked to finalize the fiscal year 2017 NDAA, which sets the policy and budget for the Defense Department.

In the 2017 legislation, lawmakers were extending the statute of limitations under the UCMJ for child abuse offenses. Previously, the UCMJ said child abuse offenses could be charged under a statute of limitations that included the life of the child, or within five years of when the offense occurred — whichever was longer. In the 2017 NDAA, Congress extended that five-year period to 10 years.

In the legislation in which they outlined that change, lawmakers included all of the crimes that fall under “child abuse offenses,” but they forgot one thing: They didn’t include indecency with a child — which had been previously included — to the new list of offenses that qualified.

It was “a clear drafting error” by Congress, according to Rachel VanLandingham, a retired Air Force lieutenant colonel who is currently a law professor at Southwestern Law School and president of the National Institute of Military Justice. VanLandingham explained that in the 2017 NDAA, Congress intended to make military prosecutors charge those same crimes of indecency with a child under article 120, which applies to rape and sexual assault. The way Congress saw it, they didn’t need to include article 134 in the list of child abuse offenses because they already included a list of other offenses, and the way article 134 works, if a charge is specifically outlined by another article in UCMJ, it must be charged under that other article.

As the U.S. Court of Appeals for the Armed Forces noted in court documents, the charges of indecent acts against McPherson likely would have been charged under Article 120b — rape and sexual assault of a child — but Article 120b didn’t exist at the time of McPherson’s assault of his daughter in 2004.

Congress effectively nullified the six counts against McPherson by not including the indecent acts provision to the UCMJ. The counts of indecent acts were subject to a five-year statute of limitations because indecent acts were not explicitly mentioned in the 2017 NDAA, and the offenses committed by McPherson happened in 2004, over a decade before he went to court-martial.

Technically, according to the U.S. Court of Appeals for the Armed Forces, there’s nothing anyone can do.

“We recognize that the result of applying the law as written by Congress requires dismissal of a charge and six specifications accusing [McPherson] of particularly egregious offenses. But the question before this Court is not whether [McPherson] ought to be triable for these offenses, but only whether he can be tried for them … The certified question is answered in the negative,” wrote Judge Gregory Maggs.

The language of the 2017 NDAA was “a product of poor draftsmanship in the court of a complicated series of revisions,” according to Chief Judge Kevin Ohlson, who wrote the dissent for the U.S Court of Appeals for the Armed Forces.

“I note that over many years Congress consistently increased rather than decreased the statute of limitations for such abhorrent crimes and, during the legislative process involving the NDAA 2017, there was no public indication whatsoever that even a single member of Congress sought to drastically alter this trajectory,” Ohlson added.

It remains unclear how many cases the mistake could impact. Don Christensen, president of the advocacy group Protect Our Defenders, said there are other cases “in the pipeline that are going to result in this, when clearly this isn’t what Congress intended.”

“There is absolutely no evidence that Congress wanted to have a shorter statute of limitations for indecent acts with a child,” he said.

While Congress likely didn’t intend for the change in statute of limitations for charges of indecency with a child, VanLandingham says it’s too late to correct the mistake. Still, someone charged with indecent acts with a child would likely face other charges, similar to McPherson, who was also found guilty of aggravated sexual contact with a child and assault consummated by a battery, VanLandingham said. She said she “would be hard-pressed to think of a situation where they wouldn’t be able to charge them with anything at all.”

But the error is also indicative of a much larger problem that exposes “the complications resulting from years’ long piecemeal reform of the military justice system,” VanLandingham said.

“While reform efforts have been well-intentioned, their sporadic, unsystematic and partial nature have transformed much of the military justice system into a true Frankenstein monster of a model, one that instead of inspiring confidence, breeds mistrust and appears to have lost legitimacy within much of the junior ranks,” she said, adding that lawmakers “need to stop deferring to the Department of Defense on military justice reform and appoint an independent panel of civilian criminal law and procedure experts to analyze the military justice system from top to bottom, followed by reform as such a body would suggest.”

“It’s just all this reform around the edges, there’s been multiple times where it wasn’t thought out, feasible in Congress but you know it’s really the staffers who are writing this … There really needs to be a complete rewrite of the military justice system from A to Z, where you’d eliminate all these, basically lumping another reform on without real understanding of how it interplays with all the other parts of the UCMJ.”

Going forward, Congress “really needs to be precise,” Christensen said, “because the Court of Appeals of Armed Forces, on a number of occasions, have shown they’re going to hold Congress to this really high standard, particularly when it comes to sex offenses.”