Recently declassified footage purports to show a new instance of the military tracking an unidentified flying object. The footage was... 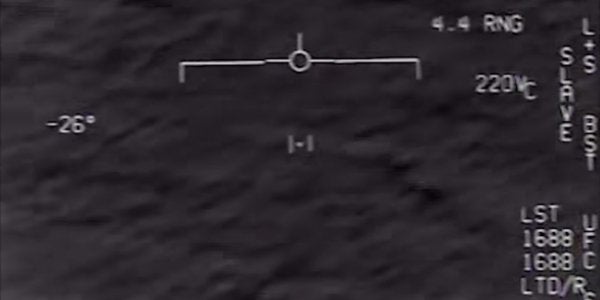 The footage was recorded in 2015 on a Raytheon ATFLIR pod, a targeting pod mounted underneath aircraft that's equipped with a camera with a laser rangefinder and a laser-spot tracker.

The pod was mounted underneath a U.S. Navy F/A-18 jet flying about 25,000 feet at a speed of Mach 0.62. The camera makes three attempts to lock on to an object moving extremely fast but fails the first two times.

On the third try, the pod manages to get a lock, and the pilots speak out about their excitement and amazement at what they are seeing.

“Whoa! Got it!” one of the pilots, yells out loud after locking on to the UFO.

The object continues at a fast rate, and the pilots appear to be amazed.

One of the pilots from the declassified videos published by The Times told ABC News that he thought the aircraft he saw was “not from this world.”

“After 18 years of flying, I've seen pretty much about everything that I can see in that realm, and this was nothing close,” Commander David Fravor said.

The footage was posted online by To The Stars Academy of Arts & Science, a private scientific research group that aims to “help push science, technology, and ultimately humanity forward.”

It is not the first time UFO footage recorded by the military has been declassified.

The New York Times published videos in December of declassified UFO flights recorded by the U.S. military. The Times later reported that the Department of Defense fielded a program that investigated the incidents, but that it was terminated in 2012.

“The Advanced Aviation Threat Identification Program ended in the 2012 time frame. It was determined that there were other, higher-priority issues that merited funding and it was in the best interest of the DoD to make a change,” a spokesperson from the DoD said at the time.

“The DoD takes seriously all threats and potential threats to our people, our assets, and our mission and takes action whenever credible information is developed.”

Chris Mellon, an adviser to TTSA and a former deputy assistant secretary of defense for intelligence for the Clinton and George W. Bush administrations, wrote a piece in The Washington Post on Friday calling for more attention to the UFO issue.

Mellon wrote, “We have no idea what's behind these weird incidents because we're not investigating.”

He said one of the reasons it isn't investigated to the extent it should be is the stigma attached to UFOs.

“This is true up and down the chain of command, and it is a serious and recurring impediment to progress.”