Ukraine is now using Russia’s own tanks against them 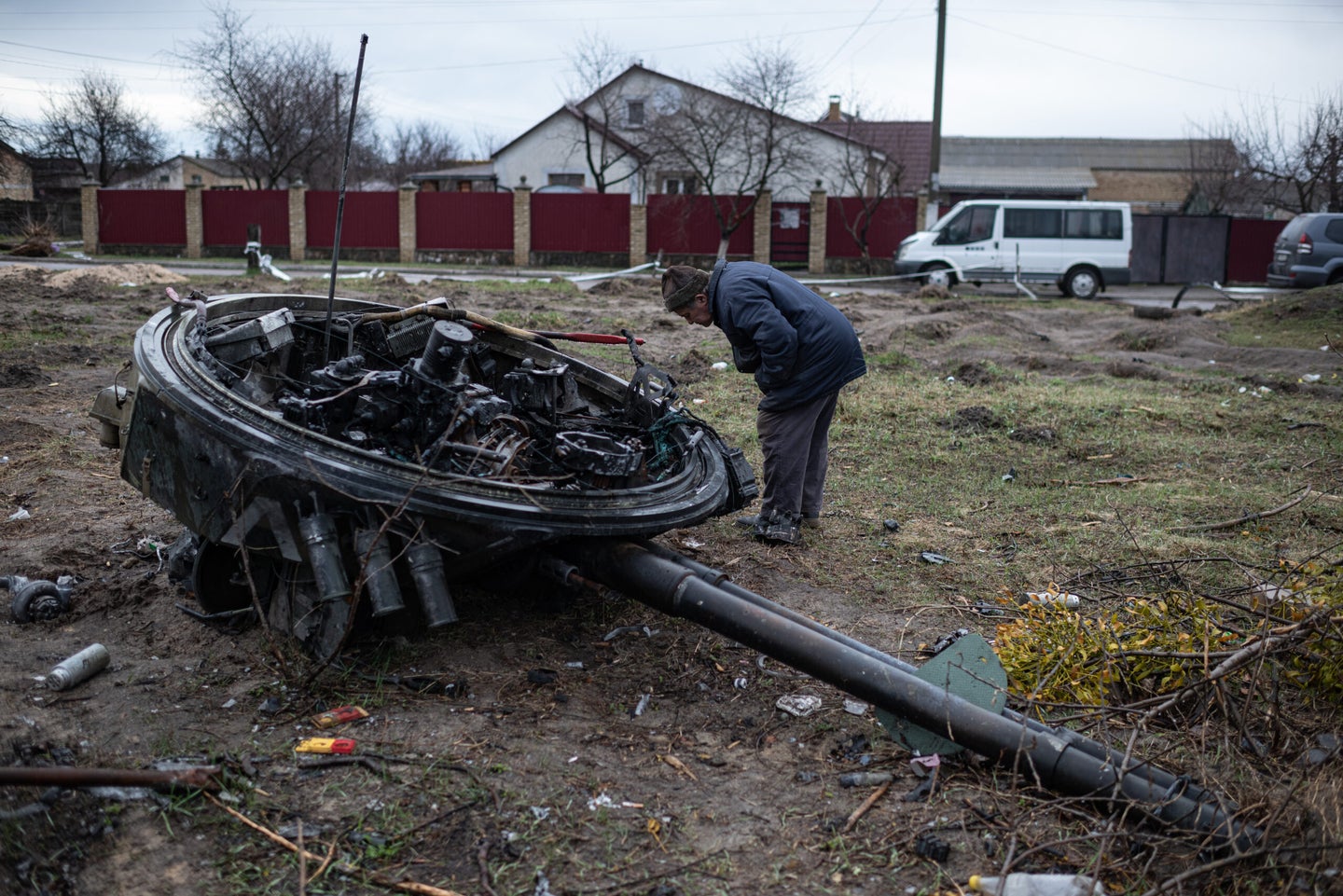 ZDVYZHIVKA, UKRAINE - APRIL 08: A man looks at the remains of a Russian tank by the road on April 8, 2022 in Zdvyzhivka, Ukraine. The Russian retreat from towns near Kyiv has revealed scores of civilian deaths and the full extent of devastation from Russia's failed attempt to seize the Ukrainian capital. (Photo by Alexey Furman/Getty Images).
SHARE

As the war in Ukraine enters its fourth month and drags on, Ukrainian forces are getting new equipment in the form of Russian tanks. Mechanics in the city of Kharkiv have been repairing battle-damaged T-72 and T-80 tanks for redeployment. The New York Times first reported on the half dozen mechanics on Friday.

Those mechanics have been looking for any damaged piece of equipment in the city, including tanks pulled out from bogs. With the Ukrainian counteroffensive in Kharkiv successful, those repurposed tanks are being actively used against the army they were recovered from. With Russian gear, the Times reported, they’re also looking for any intelligence information left in the vehicles. With equipment too damaged to repair and put back in the field, they’re stripped for parts. The ones repaired get fitted with new camouflage nets and get a test drive before being sent to the military.

The northeastern city is Ukraine’s second-largest city and was one of the first attacked when the war started, with Russian bombardments heavily damaging the city before troops tried to encircle it. This week Russian troops pulled back from the city after months of fighting and being unable to take the city. It is the second major pullback by Russia, after it moved troops back following a failed effort to take the capital of Kyiv.

Russia’s massive tank force was seen as one of its biggest tools in the invasion, but tanks have been bogged down, blocked and outright destroyed. The exact number is unknown–Ukraine claims to have destroyed more than 1,000–but at least 200 have been lost. Ukraine meanwhile has lost at least 70. Ukraine has captured several Russian tanks, allegedly up to 74. Russian forces have also been hindered by their own cell phones giving away their positions.

Although Russia’s armed forces outnumber the Ukrainian army, the latter has been getting a major boost in equipment and arms since the war started. Troops are training in Germany on new American-provided Howitzers, while there have been a steady delivery of Javelin anti-tank missiles to Ukraine, which have been heavily used to destroy or cripple Russian tanks. The United States provided an additional $800 million in aid to Ukraine last month.

Since failing to take Kyiv, Russia has centered its offensives in the country’s eastern Donbas region, trying to fully seize industrial areas and cities in the area.

Correction: This article has been updated to note that the U.S. provided an additional $800 million in aid to Ukraine last month, not $800 as it initially stated.