"The Russians just do not understand how to respond to this.” 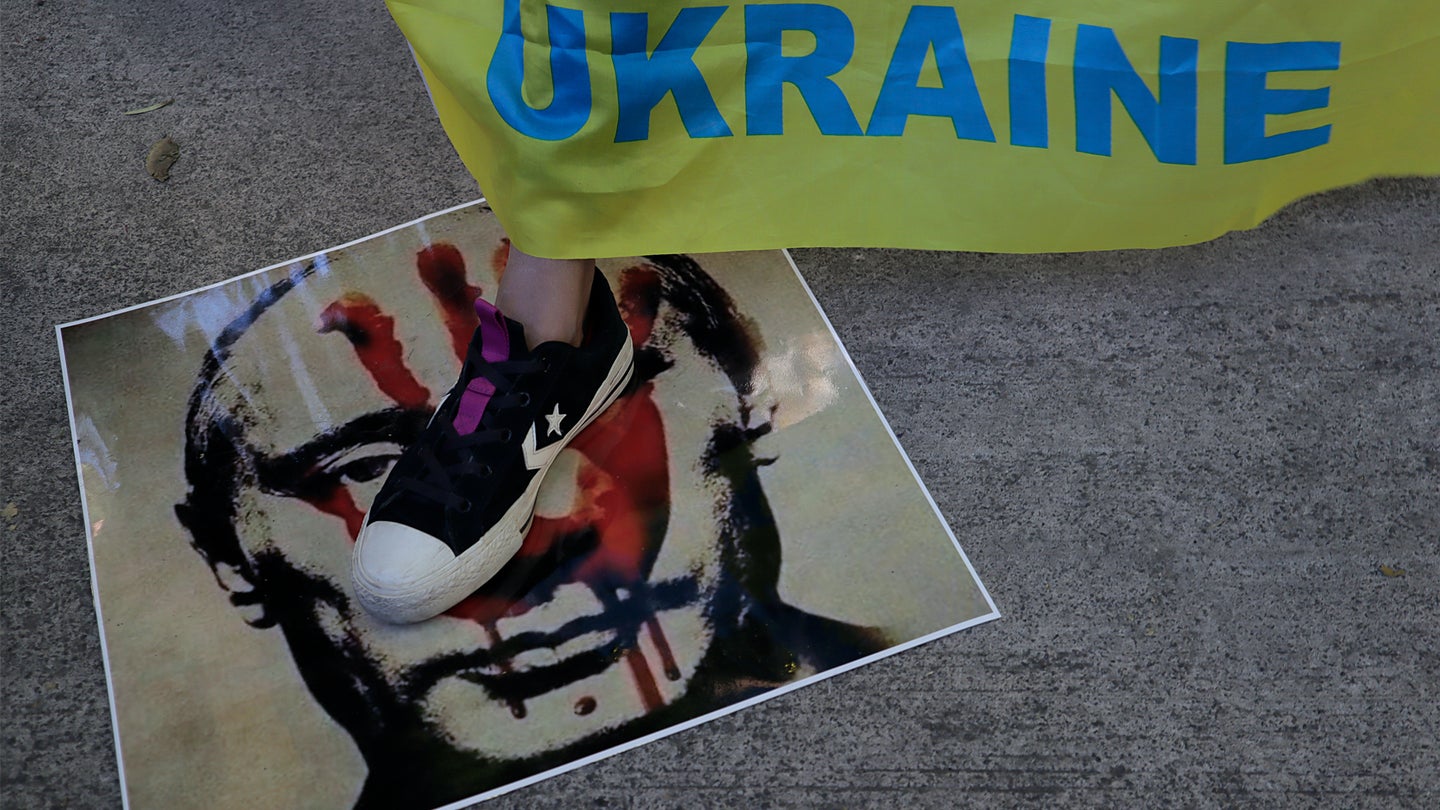 Members of the Ukrainian community step on a portrait of Russian President Vladimir Putin while protesting outside the Russian Embassy in Mexico City, after the Russian president ordered the start of a military strategy and offensive in several Ukrainian cities. (Photo by Gerardo Vieyra/NurPhoto via Getty Images).
SHARE

In a striking moment at the United Nations General Assembly on Monday, Ukraine’s ambassador read aloud text messages that were purportedly sent from a Russian soldier to his family shortly before his death.

The texts were read by Sergiy Kyslytsya, Ukraine’s Ambassador to the UN, and offer insight into Ukraine’s use of information in its ongoing war with Russia.

According to the translation at the UN, the soldier’s mother asked if he was in training exercises and why it had been so long since he’d responded. When the soldier said he wasn’t in Crimea, his mother asked where he was. “Mom,” the soldier allegedly texted back. “I’m in Ukraine.”

“There is a real war raging here. I am afraid,” the soldier’s text said, according to the UN translation. “We are bombing all of the cities, together. Even targeting civilians. We were told that they would welcome us and they are falling under our armored vehicles, throwing themselves under the wheels and not allowing us to pass. They call us fascists, Mama, this is so hard.”

While it’s difficult to verify the authenticity of the texts, Ukraine stands to gain a great deal from sharing them in such a public way on the international stage.

It’s a message “going after the legitimacy of the Russian claims,” said New America strategist Peter Singer, and the author of “Likewar: The Weaponization of Social Media,” and it’s being read at the UN, “the most global of arenas” Singer said.

According to both Singer and an Army officer with experience in information operations, the text messages read out at the UN on Monday were likely intended for multiple audiences. There were the parents of Russian soldiers, worried about their children at war. An international audience that’s hearing this text exchange at the same time that they’re also seeing reports of Russian conscripts being forced to serve in Ukraine, which suggests that Russia’s soldiers don’t want to be there. And finally, the people of Ukraine, who are deconstructing the image of the “scary Russian” soldier, Singer said. It also falls in line with reporting that Ukrainians are allowing Russian prisoners of war to call their parents.

The key to Russia’s operation, Singer said, was “this sense of inevitable victory,” that Ukraine and its allies shouldn’t even put up a fight because there’s “no way you can win.” But that idea of an inevitable victory has been stymied again and again.

Instead, “you’ve got counter messaging of not only are we capturing POWs but we’re letting your poor, scared POWs call their parents,” Singer said.

Ukraine’s messaging “has been masterful,” said the Army officer, who spoke on condition of anonymity as they were not authorized to speak with the media. Whereas the Ukrainian people are sharing photos, videos, and stories on social media that work to rally international support, the response from Russian President Vladimir Putin seems to be to “make scarier and scarier speeches” which in turn could push more countries into the arms of NATO.

“We’ll study this,” the officer said of the U.S. military information community. “We’re all saying this in real time, that’s what’s so fascinating: We’re watching this unfold in real time.”

The text message from Monday falls in line with a number of other viral moments that have been shared in favor of Ukraine. There’s the woman who told Russians to keep sunflower seeds in their pockets to grow into the country’s national flower when they died on Ukrainian soil; the quote from Zelensky when he reportedly told U.S. officials that he needed “ammunition, not a ride.” The list continues with the story of Ukrainian soldiers who gave the resistance its rallying cry of “Russian warship, go fuck yourself,” and the conflict’s first legend, in the form of the Ghost of Kyiv, a supposed Ukrainian fighter jet pilot who won the admiration of people across the planet without being proven real.

Singer went into further detail about Ukraine’s messaging in a Twitter thread on Monday, outlining some of the key objectives, which he said were to humanize their forces, mock the Russians, push stories of heroism and civilians taking a stand, bolster Zelensky’s image as a “Man of the People,” and make the damage being done to Ukraine feel personal.

And while the Ghost of Kyiv is in all likelihood a military urban legend, the veracity of that, and other similar viral stories, may not matter in the long, or short run — at least not to those fighting the conflict on the ground. At the end of the day it’s “a powerful symbol,” the officer said, which is reinforcing the message Ukraine wants people to hear: that Russian troops are demoralized, in some instances scared; that they didn’t really know what they were supposed to be doing in the first place; and that they don’t stand a chance.

It’s something Russia has to contend with, and Russian commanders, in particular, may have to address with their own troops.

“Is there any more cynical group of people on the planet than soldiers?” the officer quipped. “So when now they’re coming to you and saying, ‘Your morale’s great right?’ to the guy sitting in a hole in the ground, eating whatever the Russian equivalent of an MRE is, being shot at by little old ladies — talk about being on the back foot.”

To what degree Ukraine’s information fight was planned, or whether it sprung up organically, is unclear. What is apparent, however, is that the strategy appears to be working, and it’s  “being followed,” the officer said, and not just by the government but by civilians who are making videos and memes and sharing them online, and watching them spread “like wildfire.”

“It’s fascinating, and it’s amazing. And the Russians just do not understand how to respond to this.”