Ukraine’s war-weary soldiers have fought a grinding trench war against Russia-backed forces for six years. Now they have a new enemy to contend with. 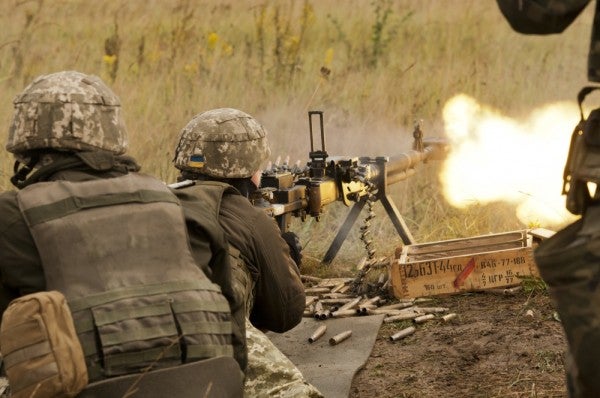 Ukraine’s war-weary soldiers have fought a grinding trench war against Russia-backed forces for six years. By now, said Bohdan Petryk, a soldier in the 128th Mountain Assault Brigade based near the eastern city of Volnovakha, they know their enemy’s tricks, they can sense when an assault is coming, and they know how to defend themselves.

But now there is a new foe taking aim at them — and with this one, there is nothing to signal a looming attack. There is no rustling of the grass in no-man’s-land, no trip wire to catch its advance.

The deadly coronavirus that is sweeping the globe makes no sound, and no bulletproof helmet or vest can protect the soldiers from it.

Ukrainian soldiers’ best defenses against the microscopic yet deadly enemy are the same as everyone else: face masks and gloves, hand sanitizer, soap and water, and physical distancing. All of which is difficult to do in the cramped trenches and dugouts along the still-active front line.

“Our living conditions have not changed significantly, but our behavior has changed,” Petryk said. He said there is a lot more hand washing among the roughly 40,000 troops deployed along Ukraine’s 400-kilometer front line.

Petryk said soldiers are trying to protect themselves as best they can from the virus, which has claimed the lives of almost 90,000 people worldwide and is expected to take many, many more.

“Everyone has their own front, their job, and their purpose,” Petryk said. “It is not our job as soldiers to fight the virus, but to protect everyone, including the doctors and nurses who are fighting this fight.”

But he said the additional concern that the coronavirus could spread to the front line has made that task and the already difficult situation there “really stressful.”

Despite the spread of the coronavirus and Western calls for cease-fires in wars around the globe during the pandemic, the fighting in eastern Ukraine, a region known colloquially as the Donbas, has so far escaped the pandemic.

Two Ukrainian soldiers were killed in action and 11 more were wounded in the first week of April. The military has reported several attacks using small arms and larger artillery from Russia-backed separatist groups in the Donetsk and Luhansk regions on a daily basis in recent weeks.

The total number of people killed in the war, which entered its seventh year this month, is around 14,000, according to estimates from the United Nations and the Ukrainian government.

Nationwide, as of April 9, Ukraine had recorded 1,892 cases of COVID-19, the disease caused by the novel coronavirus, 57 of which were fatal. As of April 9, four COVID-19 cases had been reported among the armed forces, one of which was fatal, according to the Defense Ministry.

The victim, a woman working at a military base in the western city of Ivano-Frankivsk, died far from the front line.

Nevertheless, it is possible she may have infected other personnel who could, in turn, infect others. If it reaches the front line, soldiers fear the coronavirus could spread through the trenches like wildfire.

Stricter Measures In The War Zone

To try to prevent that from happening, Ukraine’s Joint Forces Operation (JFO), as the military action in the east is officially called, announced on April 7, a day after the woman’s death, that it was imposing stricter health measures and preparing for a potential surge in coronavirus cases in the war zone, where personal hygiene standards are low and social distancing is difficult, if not impossible.

The JFO said in statement that the temperature of all personnel will now be checked daily, as will that of every person passing through checkpoints in the war zone. Military vehicles and installations will be disinfected regularly, and personnel will receive training on how to keep their quarters clean.

The JFO said it had deployed four mobile hospitals with a total of about 250 beds for potential coronavirus patients, as well as 45 ventilators. It also said that about 40,000 medical masks had been issued to active-duty soldiers and more than 10,000 respirators had been stockpiled for them.

“Masks are being worn first and foremost by those servicemen who are in constant contact with the local population,” he said, meaning those manning the several checkpoints and conducting patrols in areas where civilians remain.

Personal protective equipment (PPE) is also being given to all members of the State Border Guard Service, National Guard, National Police, and military law enforcement units deployed in eastern Ukraine, the JFO said.

Yulia Paevska, a volunteer medic tending to soldiers on the front line in and around the seaside town of Shyrokyne, 20 kilometers east of Mariupol, said there is enough PPE “for now” and that volunteers are supplying the troops with more, including hand-sewn cloth face masks. But she said soldiers need to be shown how to properly use and dispose of some of the supplies safely.

“Our soldiers and officers are in good shape and condition,” Paevska said. “But all threats may lead to death if there is insufficient training.”

But none of the measures put in place addresses one key issue: Troops live in close proximity to each other, sometimes in bunks with six or more people, which provides the coronavirus ample opportunity to take hold.

But Petryk said he and his comrades are not too worried. He said that being on the front line is in a way a form of “self-isolation.”

“You are in a position and you can’t leave to go just anywhere,” he said.

Moreover, the JFO is temporarily limiting rotations and leave for soldiers, meaning there will be less coming and going between the front line and other parts of the country.

The actions taken by Ukraine’s military follow those imposed by President Volodymyr Zelenskiy and the government. Last month, with the number of coronavirus cases in Ukraine on the rise, they ordered a national lockdown that has been strengthened and extended recently to late April.

“The coronavirus infection continues to spread in Ukraine,” Prime Minister Denys Shmyhal said in a televised statement on April 3. “The only way to break the chain of infection and save lives is to strengthen quarantine measures.”

The measures included closing the border, halting flights and public transport, requiring face masks to be worn at all times in public, and prohibiting groups of more than two people from moving around together.

All public parks, squares, and playgrounds are off-limits. All educational institutions, as well as nonessential businesses such as restaurants, cafes, and entertainment and fitness centers are closed. Banks, pharmacies, supermarkets, and gas stations remain open.

Everyone must carry identification documents on them at all times, and a 14-day quarantine is mandated for anyone arriving from abroad.

Shmyhal said the government could lift some restrictions later this month, starting with reopening public transport to allow people to return to work and “to restart the economy from the beginning of May.”

But he walked back that statement a bit on April 8, saying the measures “will most likely be extended until early May.”

His comments came as the World Health Organization (WHO) urged Ukraine to prolong the measures, the government said.

“Quarantine is what saves us,” Zelenskiy said in a statement on April 8. “Because we introduced it in time, the spread of the coronavirus is not so fast. We see that many Ukrainians have a responsible attitude toward quarantine, although this is not easy.”

While the coronavirus and the measures to slow its spread have brought Ukraine to a standstill, fighting persists on a daily basis in the Donbas — and in many other war zones around the world.

To allow Ukraine and other nations at war the ability to focus on the pandemic, 193 international organizations have called for a “global cease-fire.”

“Our world faces a common enemy: COVID-19,” United Nations Secretary-General Antonio Guterres said on March 23. “The virus does not care about nationality or ethnicity, faction or faith. It attacks all, relentlessly…. Meanwhile, armed conflict rages on around the world…. The fury of the virus illustrates the folly of war…. That is why today, I am calling for an immediate global cease-fire in all corners of the world. It is time to put armed conflict on lockdown and focus together on the true fight of our lives.”

In Ukraine’s case, cease-fires have been hard to come by, even after a 2015 peace deal known as the Minsk II accords were signed by Ukraine and Russia. Dozens of attempts have failed even before they began.

Zelenskiy, a former comedic actor who won a landslide election a year ago, made peace in the Donbas his top priority, even meeting face-to-face with Russian President Vladimir Putin and agreeing to controversial concessions in an attempt to halt the shooting.

But the coronavirus pandemic has diverted his attention from that effort.

With The Virus, A Chance For Peace?

But where Zelenskiy may have found an obstacle, others see an opportunity.

In an opinion piece published this week on the website of National Public Radio in the United States, three former U.S. ambassadors to Ukraine argued that the pandemic may actually provide an opportunity to end the war in Ukraine.

“As the spreading coronavirus and collapsing oil prices weigh increasingly on the Kremlin, the United States and its allies should offer to lift international sanctions against Russia if Putin will end his military incursions into Ukraine,” wrote William Taylor, Steven Pifer, and John Herbst. President Donald Trump and Congress, they said, “can advance America’s interests, and the world’s, with a bold step to encourage an end to this war. The Trump administration and Congress should seize this opening.

“If Putin were willing to withdraw from [the Ukrainian region of Crimea, which Moscow annexed in 2014], the other sanctions imposed against that illegal annexation could be lifted as well,” the ambassadors wrote.

“Especially during a pandemic, it is insanity for Russian-led forces and Ukrainians to be killing each other,” the trio concluded.