‘They now have family:’ Dozens show up to honor unclaimed veterans buried with military honors

"Their services honored the colors of our nation, and today, our nation's colors honor them." 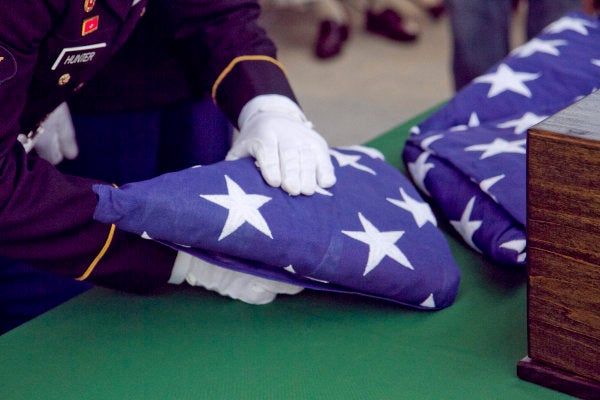 Joseph Williams lived under the Blossom Street Bridge, where 27,000 cars passed over his head every day. His body was found alone on April 1, a day or so after he died of natural causes. He had no family and lived 58 years with virtually no paper trail.

“He is an enigma,” said Bill Stevens, deputy coroner with the Richland County Coroner's Office.

After an exhaustive month-long search, officials were only able to discover that Williams was a Washington D.C. native who served his country for three years in the U.S. Army. His service guaranteed him a military burial, paid for by the federal government. And like all veterans of the armed forces, he was not alone.

On Wednesday, nearly 80 people — most of them veterans or family of active service members — gathered as Williams and another unclaimed veteran were laid to rest in the Fort Jackson National Cemetery with full military honors.

“They are previously unclaimed,” said William Lynch, chairman of the Homeless Veteran Burial Program. “They are now claimed, they now have family and now they will be at rest with their brothers and sisters.”

Williams, 58, served in the Army from 1978 to 1981. Danny Ballantyne, 74, of Sumter, served as a Lance Corporal in the U.S. Marines from 1962 to 1965 and earned a Good Conduct Medal, which recognizes three consecutive years of “honorable and faithful service,” according to a press release.

A network of several veterans groups came together to honor their fallen comrades.

The remains were escorted by about 40 members of the Patriot Guard Riders, mostly bearded men on motorcycles clad in leather or denim vests with patches representing the war they fought in, the veterans' group they belong to, the insignia of a motorcycle group — such as the American Infidels — and, of course, the American flag.

They guided two hearses to a curb at the Fort Jackson National Cemetery, where dozens of people immediately stood at attention and saluted the caskets, both draped in American flags. Some guests wore a suit and tie, and a red beret stuck with ornate pins and embroidered with the war they fought; some wore a full military uniform from their respective branch; and others wore their Sunday best.

“I think it's important for (my children) to appreciate what these people have done for us,” said Reosti, whose husband serves in the Army. She brought three of her children, who are between 6 and 12 years old.

Torbit felt compelled to bring her four children, between 2 and 9 years old, when the ceremony for the unclaimed veterans was announced at her church on Sunday.

“Because we are Christian, we believe we are all family and united,” said Torbit, whose husband serves in the Air Force reserves.

As guests gathered around the caskets, the sun illuminated thousands of white stones, each carved with a name that carries a story as vibrant as the next, said Sam Boone, a retired U.S. Army chaplain.

“The stories of men and women who answered the call when given to them to defend our nation, our constitution and our way of life; to defend it here and around the world,” Boone said. “No amount of money will buy that plot. It is only purchased by the service and sacrifice to our beloved nation.”

Williams and Ballantyne will join more than 6,200 names inscribed on the white stones that perfectly line the rolling-green landscape in the Fort Jackson National Cemetery.

During the ceremony, a line of men and women holding flags encircled the crowd, which gathered in the shade of an open-air shelter. A surprise storm rolled through, and as some gathered closer together under the shelter to avoid getting wet, the line of people with flags held steady and unflinching in the rain. It was a small sacrifice to their fellow soldiers.

“Their services honored the colors of our nation, and today, our nation's colors honor them,” Boone said to the crowd, with his back to the caskets. He then swiveled on his heel to face the caskets in salute. “Danny and Joseph, you are dismissed to join your final formation. May you rest in peace.”

A group of men then fired rifles into the air three times.