University Of Chicago Tells Freshmen There Will Be No ‘Safe Spaces’

University of Chicago class of 2020, get ready for a college experience filled with debate, discussion — and possibly discomfort.... 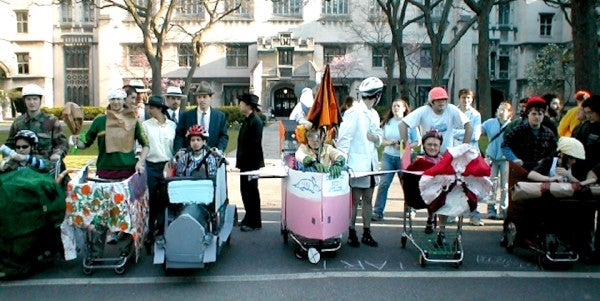 University of Chicago class of 2020, get ready for a college experience filled with debate, discussion — and possibly discomfort.

As colleges across the country wrestle with balancing academic freedom and open discourse with student health and safety, University of Chicago Dean of Students John Ellison told incoming freshmen in a letter what they should expect on campus.

“Our commitment to academic freedom means that we do not support so-called 'trigger warnings,' we do not cancel invited speakers because their topics might prove controversial, and we do not condone the creation of intellectual 'safe spaces' where individuals can retreat from ideas and perspectives at odds with their own,” the letter said.

Trigger warnings — used to alert students of sensitive material that might be uncomfortable, offensive and traumatic to them, such as discussions about race and sexual assault — are becoming more widely used by universities across the country. Similarly, safe spaces are popping up on campuses to shelter students from speakers and topics that might make them feel uncomfortable.

In a welcome letter to freshmen, the College made clear that it does not condone safe spaces or trigger warnings: pic.twitter.com/9ep3n0ZbgV

In 2014, after a debate over sexual assault on campus was scheduled, students at Brown University organized a safe space on campus with counselors, bubbles, Play-Doh and pillows. The space was designed to give students who might find the discussion troubling a place to recuperate, The New York Times reported.

The letter included a link to a university report issued by a committee established in 2015 to articulate the university's policy on freedom of expression.

“It is not the proper role of the University to attempt to shield individuals from ideas and opinions they find unwelcome, disagreeable, or even deeply offensive,” the report states. “Although the University greatly values civility, and although all members of the University community share in the responsibility for maintaining a climate of mutual respect, concerns about civility and mutual respect can never be used as a justification for closing off discussion of ideas, however offensive or disagreeable those ideas may be to some members of our community.”

The report pointed out the university's long history of commitment to freedom of expression and debate, outlining what past university presidents had said about protecting free speech. Former President Hanna Holborn Gray was quoted in the report saying, “Education should not be intended to make people comfortable, it is meant to make them think. Universities should be expected to provide the conditions within which hard thought, and therefore strong disagreement, independent judgment, and the questioning of stubborn assumptions, can flourish in an environment of the greatest freedom.”

In a welcoming letter last fall to all students and faculty, university President Robert Zimmer touched on the legacy of the university's values.

“Perhaps the most distinctive attribute of the University in its 125 years has been its deep and unwavering commitment to open discourse, free expression, and a singular focus on rigorous inquiry. The founders and first faculty members here, including President William Rainey Harper, viewed free expression as an essential basis for an institution where strength of ideas, not social standing or other considerations, would determine success in education and research,” Zimmer said in the letter.

The debate over freedom of expression has played out at other universities in the Chicago area and across the country.

Earlier this month, DePaul University denied a request to have conservative commentator Ben Shapiro give a speech at the university, citing security concerns. And in May, a protest disrupted and forced the cancellation of an appearance by Milo Yiannopoulos, a conservative blogger with Breitbart News Network.

In a statement to the Tribune earlier this month about the Shapiro cancellation, DePaul spokeswoman Carol Hughes said: “DePaul University's Office of Public Safety determined, after observing events which took place when Mr. Shapiro spoke elsewhere, that it was not in a position to provide the type of security that would be required to properly host this event at this time.”

Shapiro is a columnist and radio commentator whose books include “Brainwashed: How Universities Indoctrinate America's Youth.” Videos on social media show Shapiro discrediting the Black Lives Matter movement. His talks have sparked protests on college campuses.

In 2014, former Secretary of State Condoleezza Rice backed out of giving the commencement speech at Rutgers University after student protests centered around her involvement in the Iraq War during the George W. Bush administration.

Last year, a Northwestern University professor who wrote a controversial essay on how colleges police faculty-student relationships sparked a national debate over academic and sexual freedom. After the publication of the essay by communications professor Laura Kipnis, two students filed complaints claiming that Kipnis created a “chilling effect” on their ability to report sexual misconduct.

Kipnis was cleared after a nearly three-month investigation for complaints that she violated the federal Title IX law against gender discrimination with her essay “Sexual Paranoia Strikes Academe.” In the essay, Kipnis, an author and film professor, made clear that sexual abusers should be punished but also chided the university for its ban on faculty members dating students, calling it the “Great Prohibition” and arguing that such policies treat students as vulnerable children.