Nearly 75 years after Lewis Lowell Wagoner was declared missing following the Japanese attack on Pearl Harbor, his remains have... 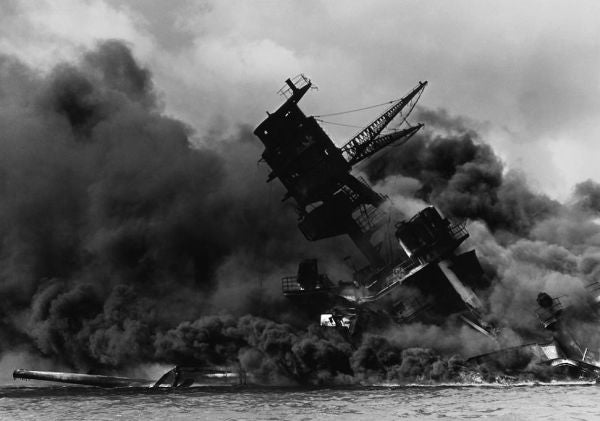 Nearly 75 years after Lewis Lowell Wagoner was declared missing following the Japanese attack on Pearl Harbor, his remains have been identified.

The Navy seaman, who served aboard the USS Oklahoma, will soon be coming home to be buried next to his brothers at the Whitewater cemetery after his remains were identified using DNA technology.

The announcement was made Sunday at the Haysville Veterans of Foreign Wars Post 6957.

Wagoner’s family, who is from Haysville, and Sedgwick County leaders gathered at the local VFW on Sunday.

Lewis Wagoner was born on Kansas Day – Jan. 29 – in 1921 in Missouri. Shortly afterward, the family moved to Whitewater. He was the oldest of eight boys.

Merle Wagoner, one of Lewis’ brothers, died three years ago. On hand Sunday were Merle’s wife, Doris; his son, Ron; and two daughters, Brenda Leis and Becky Wagoner. Through the years, the Wagoners had become friends with two other Wichita-area Pearl Harbor survivors and shipmates from the USS Oklahoma, Arthur Dunn and Paul Aschbrenner, both of whom have since died.

The USS Oklahoma during salvage operations.Photo from U.S. National Archives.

Through the years, the family said, it was always a mystery what had happened to Lewis Wagoner, who was 20 when he died. His picture was always on display at his parents’ house and, later, at his youngest brother’s house.

Related: 5 Harrowing Images From The Attack On Pearl Harbor »

A surviving brother, Carl Wagoner, lives in Utah but was not at the service on Sunday.

‘This issue is not over’

“When we get through a conflict or war and we clean up the battlefields, we need to do everything within our power for the fullest possible accounting of our missing in action and those held as prisoners of war,” a tearful Jim Denison told those gathered at the VFW. Denison is the district POW/MIA chairman. “When I am gone, I want this to carry on. This issue is not over.”

As Denison spoke on Sunday, members of the VFW had 50 black and white helium-filled balloons they were scheduled to release honoring the post.

One black balloon gently floated down from the ceiling and toward Denison at the podium – he said “hello” to it – and then the balloon floated and stayed next to Wagoner’s family for the duration of the service.

It was a sign, Brenda Leis said afterward – perhaps of her uncle’s or father’s spirits.

“It was odd, I think, that was the one that didn’t have enough helium; it was weird how it floated over and in front of us,” Doris Wagoner said.

As far as her husband and Lewis?

“I think they are up there having the time of their life,” she said. “It was always something my husband looked forward to and thought he would be here for.”

Three months after Merle Wagoner died in 2013, Doris Wagoner said, she received a phone call saying there was a possibility the remains might be identified. Her husband, she said, was only 7 when the Pearl Harbor attack occurred on Dec. 7, 1941, and did not have any significant memories of his oldest brother.

Wagoner’s remains will be flown to Wichita on Oct. 7. A memorial service is scheduled for Oct. 8 at Smith Mortuary in Haysville, with interment scheduled later that day in Whitewater.

“I’ve practically lost all my Pearl Harbor survivors,” said Denison, an honorary member of the Pearl Harbor Survivors Association, whose 75th anniversary is this year. “So I have families. We still have close to 1,800 people still missing from Pearl Harbor.”

In search of DNA

The USS Oklahoma was in berth F-5 of Battleship Row on Dec. 7, 1941. The ship took three torpedo hits within minutes after the attack began shortly before 8 a.m. In all, it took nine torpedo blows.

In less than 12 minutes, the ship rolled over, trapping many of the sailors.

In recent years, advances in DNA research have enabled military authorities to identify remains of the long-dead, many from mass graves.

Since the early 1990s, the Department of Defense DNA Registry has conducted a massive program to catalog the DNA of current and past members of the armed forces.

The remains of 35 crew members were positively identified in the years immediately following the attack. But 429 sailors and Marines were listed as killed or missing. In 1949, a military board classified their remains as nonrecoverable.

But in May, Navy Seaman 2nd Class Dale Pearce, who was serving on board the USS Oklahoma when the attack occurred, had his remains identified and returned home to Dennis, about 8 miles from Parsons in Labette County. There may be more remains to come, Denison said.

“It was a hard-working family. I think it is great he is finally coming home,” said Ron Wagoner.