Report: The US Has 44,000 ‘Unknown’ Troops Around The World The Pentagon Claims It Cannot Track

The U. S. has more than 44,000 military personnel across the globe that the Pentagon claims it cannot track, according... 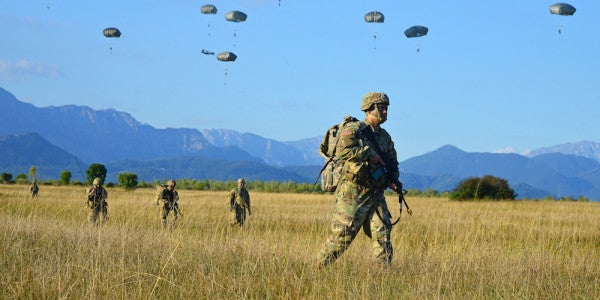 The U. S. has more than 44,000 military personnel across the globe that the Pentagon claims it cannot track, according to a recent report.

“We are not at a point where we can give numbers other than those officially stated,” said Army Col. Rob Manning, a Pentagon spokesman.

The report — compiled by the Defense Manpower Data Center under the Office of the Secretary of Defense — shows more than 44,000 personnel in a category labeled “Unknown.”

Active-duty military personnel number slightly more than 1.3 million in the Army, Navy, Marine Corps and Air Force, and hundreds of thousands more civilian personnel fall under Defense departments. That number does not include Reserve and National Guard formations that might be active at any particular time.

The U.S. has military personnel in nearly every country in the world, ranging from two liaison officers in Fiji to tens of thousands from all of the service branches in Japan and Germany, according to the report.

Related: 5 Maps That Show The Major Hotspots Where The US Military Is Deployed Right Now »

Manning said during a press briefing Wednesday that troop numbers in Syria are about four times higher than reported by the Pentagon, with 2,000 present in the country. He also clarified that there are 5,200 in Iraq, up from about 5,000 reported earlier.

“We seek to balance informing the American public with the imperative of operational security and denying the enemy any advantage,” Manning said at the briefing.

The Pentagon’s previous number of troops in Syria was 503. Though the additional 1,500 acknowledged Wednesday is small compared to the size of DOD manpower — over 246,000 in California alone according to the data center — such discrepancies could help explain why 44,000 are unaccounted for.

The data center is charged with accounting for troops and civilian personnel that fall under the Defense Department. The numbers are updated quarterly on the center’s website, www.DMDC.osd.mil.

“Our commitment is to be as transparent as we can, within the constraints of operational security,” Manning said. The Pentagon acknowledged in a statement that it has no good way to track how many servicemembers are stationed overseas, where they are and when they were there.

“There is no one personnel system in the [Defense Department] that tracks the daily location of all DoD personnel. There is no easy way to track all deployments, training exercises, TDY (being attached to another unit for training or specific missions, typically for less than six months) or temporary assignments,” according to the statement. “If you take the total numbers assigned in the United States and assigned overseas, and add the ‘Unknown,’ you get the total force numbers for each service.”

Related: The DoD Has Way More Troops In Syria Than It’s Telling Us »

However, another Pentagon spokesman questions the value of the data center numbers.

“Those numbers are not meant to represent an accurate accounting of troops currently deployed to any location,” said Eric Pahon. “They should not be relied upon for a current picture of what is going on.”

Secretary of Defense James Mattis ordered a review of how personnel are counted in Afghanistan and elsewhere.

“There’s a very strange accounting procedure I inherited … What I’m probably going to end up doing is out putting everyone into one thing and saying, ‘Here’s how many are really there now,’ ’’ Mattis said during a news conference in August.

Secretary of Defense Jim Mattis meets with Arfan al-Hayali, Iraq’s minister of defense, during a visit to Baghdad, Iraq, Aug. 22, 2017.

The murkiness of the posted numbers of personnel in locations across the world follows a congressional outcry over lack of knowledge of how many soldiers are stationed in Niger, where four Special Forces soldiers were killed Oct. 4 in an attack by militants thought to be associated with radical Islamists.

Prominent members of Congress, including Sen. Lindsey Graham, R.-S.C., claimed they had no idea that so many soldiers — about 800, according to Marine Gen. Joseph Dunford, chairman of the Joint Chiefs of Staff — were deployed to Niger. The United States has maintained troops there since 2013 and has been involved on and off in the country for decades, Dunford said.

Troop numbers in Afghanistan peaked in 2010 with more than a 100,000 troops deployed as part of former President Barack Obama’s “surge” strategy to counter a patchwork of Taliban and other insurgent groups. Those numbers have been drastically reduced; the data center report states there are 16,500 DOD personnel in Afghanistan, including civilians.

Related: How Many US Troops Are Currently Fighting In Afghanistan? The Pentagon Won’t Say »

The use of contractors in place of regular troops also complicates the issue. They do not typically fall under the total number of deployed personnel to war zones, and often take the place of normal unit personnel such as mechanics and truck drivers, as Afghanistan commanding officer Army Gen. John Nicholson told Congress earlier this year.

The U.S. maintains 23,659 contractors in Afghanistan and 4,609 in Iraq, according to a fourth-quarter 2017 report from the Defense Department. Many of them are local residents and foreign nationals hired to provide basic services at U.S. bases, but they also include many skilled workers, pilots, technicians and private security forces, according to the report.

The percentage of Defense Department personnel deployed to combat zones is small by Post-9/11 standards of hundreds of thousands of troops in Iraq, Afghanistan and elsewhere. But smaller numbers of “train-and-equip” specialists such as Special Forces and contractors are becoming ubiquitous in many countries in Africa, the Middle East and Central Asia, according to the data center report.

Obama set caps on numbers of troops near the end of his presidency and deployed numbers dropped significantly. But President Donald Trump has given authorization for combatant commanders in theaters to have more discretion over how many troops are required.

“The delegation of this authority does not in itself change the force levels for Afghanistan,” Mattis said in a statement after Trump’s directives. “Rather, it ensures the Department of Defense can facilitate our missions and align our commitment to the rapidly evolving security situation, giving our troops greater latitude to provide air power and other vital support.”